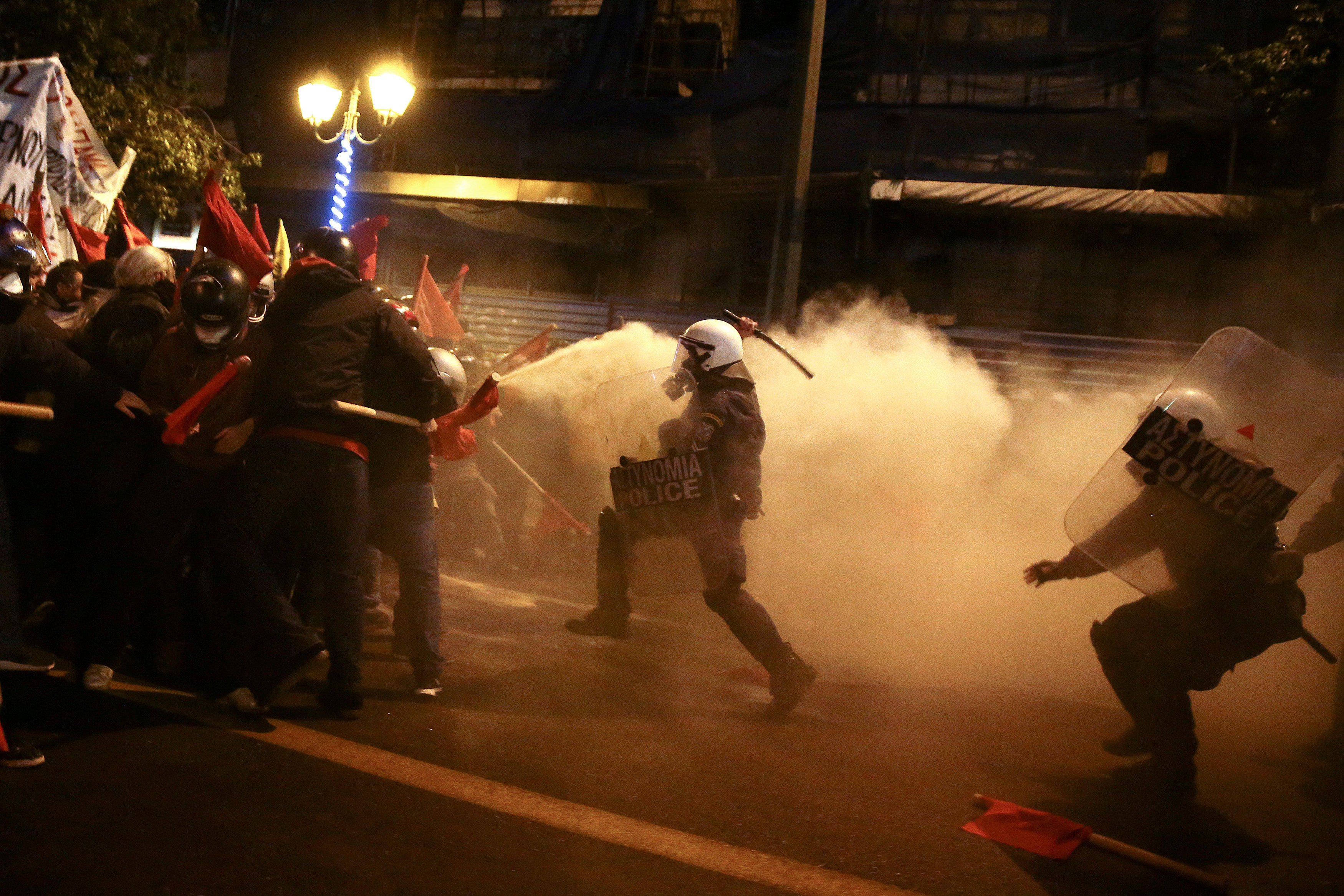 ATHENS, Greece -- Greek riot police used tear gas and stun grenades Tuesday in Athens to disperse about 3,000 left-wing marchers protesting a visit by President Obama after they tried to enter an area off-limits to demonstrators.

Police made at least four arrests and said one woman was slightly injured in the clashes, which took place far from Mr. Obama’s meetings.

The violence broke out as youths in motorcycle helmets and gas masks, armed with wooden clubs and petrol bombs, tried to break a police cordon in front of a barrier formed by police buses. Rioters pulled back to the Athens Polytechnic university complex, site of a 1973 student uprising, and engaged in running street fights with police, throwing dozens of petrol bombs.

Left-wing and anarchist groups who organized the protest had planned to reach the U.S. embassy in Athens. But authorities banned demonstrations in a large swath of the city to ensure that protesters came nowhere near Mr. Obama, who was attending a dinner at the residence of Greek President Procopis Pavlopoulos.

CBS News correspondent Margaret Brennan reports that as the protests unfolded, Mr. Obama praised Greece as the birthplace of democracy, but warned there is a dark side to the type of populist movement led by President-elect Donald Trump.

“We are going to have to guard against a rise in a crude sort of nationalism or ethnic identity or tribalism that is built around an ‘us and a them,’” Mr. Obama said.

The fast pace of economic and social changes has alienated people, he said, and leaders like Trump have tapped into that anger. He called for a “course correction” in the West to ensure that all members of society benefit from the advances in technology and globalization.

Mr. Obama said societies that manged to foster greater equality were “less likely to turn on each other, less likely to appeal to some of the darker forces.”

“(The U.S.) is a state that causes military coups, interventions and imperialist wars from Ukraine to the eastern Mediterranean, the Middle East, North Africa, Asia and Latin America,” he told supporters.

The small Popular Unity party, which took part in the main protest Tuesday, described Obama’s visit as “a provocation” due to that timing. Party leader Panayiotis Lafazanis also blamed the U.S. for Greece’s economic woes.

The debt-crippled country depends on international bailout loans, and has been forced by creditors to implement deep income cuts, tax hikes, welfare cuts and economic reforms.

“American imperialism has not changed,” Lafazanis said Tuesday. “The U.S. presidents and administrations have played - and still play - a leading part in the bailout-linked plundering of our country ... and their interventions are drowning our part of the world in blood and creating refugee waves.”

The last visit to Greece by a U.S. president was by Bill Clinton in 1999, which was also marred by clashes between anarchists and riot police.