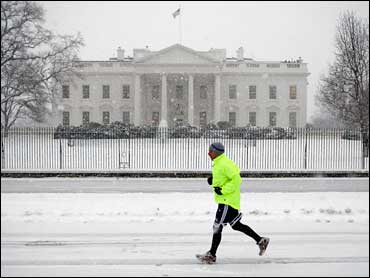 (AP)
On this snowy day in the nation's capital, President Obama chose not to renew his suggestion that those who live here are wimps when it comes to snow.

At his only public appearance of the day, he said not a word about the latest snowfall which dropped about five inches in the city and even more in the suburbs to the south and east. Many schools were closed including the one his daughters attend. And even the federal government was allowing employees to arrive up to two hours late or take unscheduled leave because of the weather. But Mr. Obama held his tongue – unlike the last time it snowed.

That was January 28th, a week into his presidency. His daughters' school was closed due to weather that day too – and the president was surprised.

"As my children point out," he said at the start of a photo-op in the Roosevelt Room that morning, "in Chicago – school is never cancelled."

It was his way of saying that when it comes to snow in Chicago, the people there are made of sterner stuff.

"When it comes to the weather, folks in Washington don't seem to be able to handle things."

The criticism is well-founded and often self-administered. Residents here have a well-earned reputation of over-reacting to a few inches of snow. Still – his cracks of a few weeks back triggered some harsh responses in Letter to the Editor columns and on local radio.

But today, the man from Chicago didn't take any swipes. Looking to pre-empt the issue at his daily press briefing, White House spokesman Robert Gibbs greeted reporters by asking about our commute.

"This might be what the president considers a serious snowstorm," he said, admitting he wanted to get out front "of any potential question" on that subject.

Some of us ended up writing about it anyway.