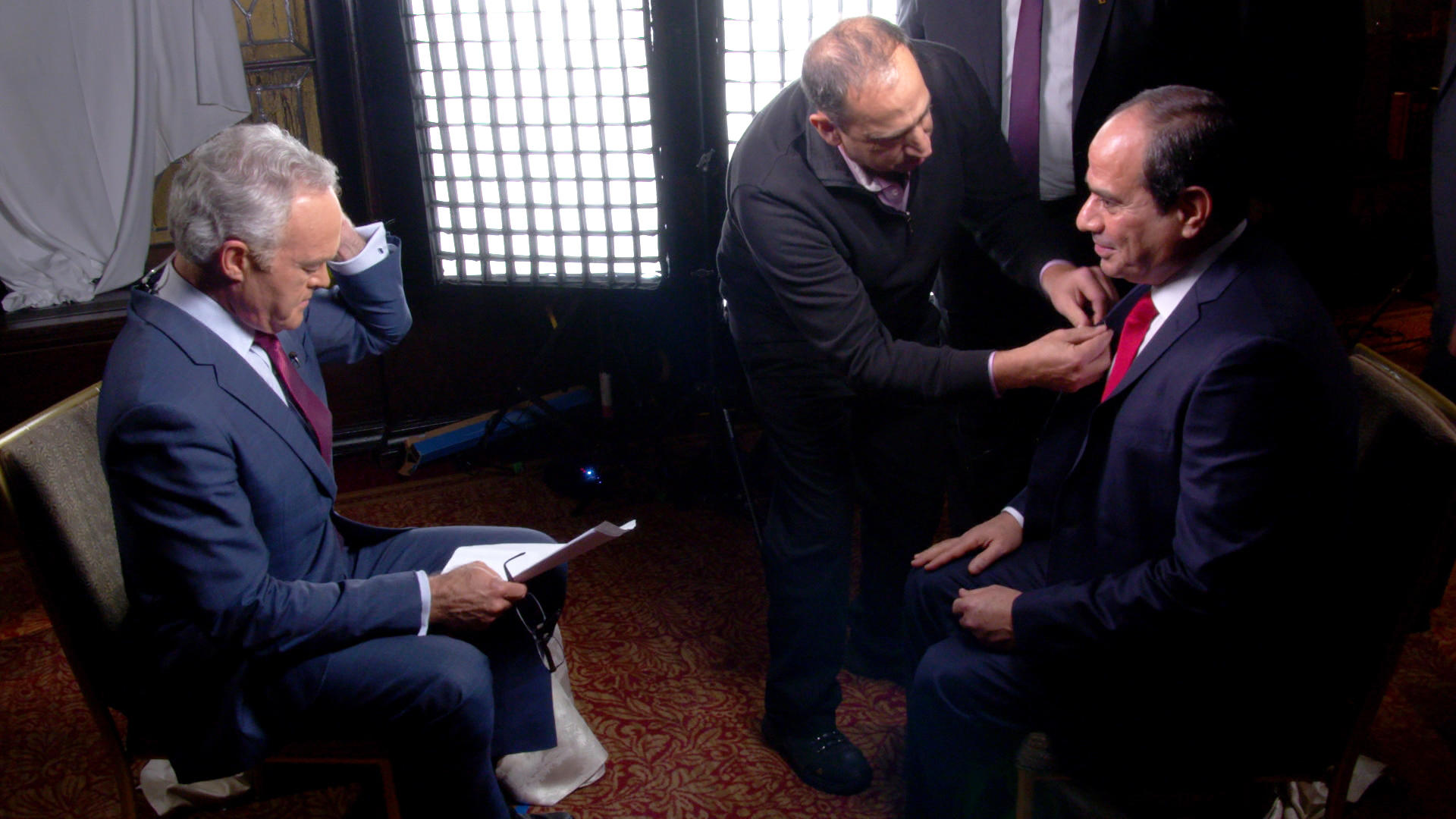 In the video above, correspondent Scott Pelley and producer Rachael Morehouse tell 60 Minutes Overtime's Ann Silvio the story behind their interview with Egypt's President Abdel Fattah el-Sisi. Below is a transcript.

Ann Silvio: Scott, on 60 Minutes this week you interviewed the president of Egypt, Rachael Morehouse is the producer. Scott, what is your job? What are you trying to accomplish in this kind of interview?

Scott Pelley: I'm trying to ask him the questions that he doesn't get at home.

Scott Pelley in interview with President El-Sisi: Mr. President, I've spoken to a number of your countrymen who refuse to call you Mr. President because they say you're a military dictator…

Scott Pelley: This is a man who is accused of some of the worst human rights abuses of the last many years. In his own country, no one dares speak a word to him about any of that. And now here I was in this amazing position to be able to ask this man questions.

Scott Pelley in interview with President El-Sisi: Do you have a good idea of how many political prisoners you're holding?

Ann Silvio: Is it fair to say the government of Egypt pressured 60 Minutes not to air this interview?

Rachael Morehouse: They tried to--

Scott Pelley: No, they asked us--

Scott Pelley: --they asked us that directly.

Rachael Morehouse: The interview took place at 8:00 at night at the Palace Hotel in New York and by the time I got home, my contact at the embassy sent me an email. It says, "We are formally requesting that the interview not be aired."

Ann Silvio: Is that a request that you get often at 60 Minutes?

Scott Pelley: I don't believe I've ever received that request before.

Rachael Morehouse: I never have before.

Ann Silvio: Did the location of the interview factor into the kind of conversation you had? It's interesting that it did not occur in Egypt.

Rachael Morehouse: It probably changed the scope a little bit just because it was on our home turf.

Scott Pelley: On our own soil. I think that's probably true.

Ann Silvio: Did they have any sense of what the questions might be before the interview?

Rachael Morehouse: Well, they wanted all of the questions in writing before the interview. I had a back and forth with them, I would say for about a month, saying, "Absolutely not. We can't do this, this is not the way we work at 60 Minutes." We understood that he wanted to be on the world stage. He wanted to be a figure up there with the powerful leaders in the Middle East. And so we pitched this to him, that those-- powerful leaders come on 60 Minutes.

Ann Silvio: Were there questions that you had identified, "Okay he could tear off this mic with this question, he's not gonna like this one?"

Scott Pelley: We don't care. We don't care. If I have a question there that needs to be asked really on behalf of the entire world-- and I think, "Well, he'll tear of his mic and run outta the room," well, then that's his answer.

President El-Sisi: I don't know where they got that figure…

Ann Silvio: As a viewer when you're watching the interview, you think, "Did he know what 60 Minutes is before he agreed to do this?"

Scott Pelley: Well, that was what I wondered too. His record on human rights as chronicled by the United Nations and the U.S. State Department is absolutely dreadful. Eight-hundred people were massacred, protesters in the streets of Cairo. So, it was really important to seize this opportunity. Because I don't know if he'll ever be questioned about it again.

Scott Pelley in interview with President El-Sisi: Did you give that order?

President El-Sisi: Allow me to ask you a question. Are you closely following the situation in Egypt? From where do you get your information?

Scott Pelley How he might have decided to sit down with us and imagine that those questions weren't going to come up, I-- I do not know.

Scott Pelley in interview with President El-Sisi: Thank you sir, I hope to see you in Egypt

Ann Silvio: When the interview finished-- you thanked each other for the conversation. There was a plan to continue your reporting.

Scott Pelley: There was, yes.

Ann Silvio: Was there any indication that this would go awry?

Scott Pelley: As far as the two principals were concerned, it was as cordial as could be. It was Rachael who took all the heat as soon as I left the room.

Ann Silvio: How did that play out?

Rachael Morehouse: It was continued pressure. They looped in their ambassador, the head of the Mukhabarat was involved in this, which is their intelligence agency. Very high-level people were involved and doing everything that they could to try to negotiate with us, so that it was on their terms whether or not we air this interview.

Ann Silvio: So what happens from there? You've got plane tickets booked to go to Egypt. This was just the first portion of your reporting, right? You had planned to go to Egypt and meet el-Sisi there, correct?

Scott Pelley: That's right, and-- they offered Rachael the red-carpet treatment in Egypt.

Rachael Morehouse: They did. And I mean, I think you said the best advice, you said, "Just be very honest with them. We would love to go, tell them we would be delighted to go. But-- we're still going to use the interview from last night."