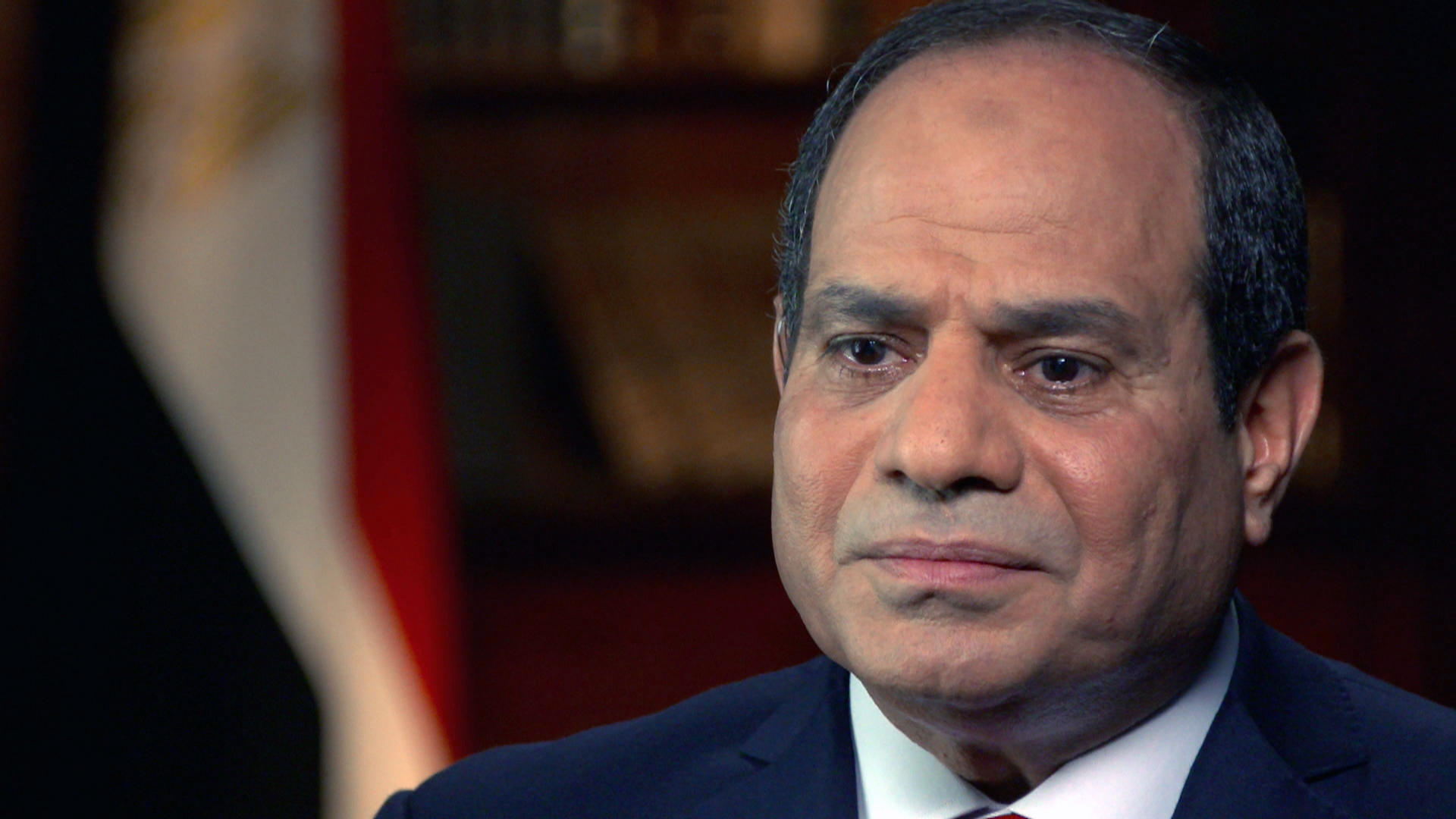 American taxpayers send more foreign aid to Egypt than to any other nation except Israel. But America's nearly one and a half billion dollars a year is going to a regime accused of the worst abuses in Egypt's modern history. Opponents of President Abdel Fattah el-Sisi have been imprisoned by the thousands. El-Sisi has strangled freedom of speech. And his troops have murdered protestors. As you might imagine, President El-Sisi does not do a lot of interviews. And we were surprised when he sat down with us. El-Sisi was apparently surprised by our questions because his government has asked us not to broadcast his interview.

This is an American citizen. In 2015, he was sentenced to life in this Egyptian prison. His crime was transmitting false news, news which offended the man we met recently in New York: President Abdel Fattah el-Sisi.

Scott Pelley: Do you have a good idea of how many political prisoners you're holding?

President Abdel Fattah el-Sisi: We don't have political prisoners nor prisoners of opinion. We are trying to stand against extremists who impose their ideology on the people. Now they are subject to a fair trial. And it may take years, but we have to follow the law.

President Abdel Fattah el-Sisi: I don't know where they got that figure. I said there are no political prisoners in Egypt. Whenever there is a minority trying to impose their extremist ideology. We have to intervene regardless of their numbers.

The "extremists," as he calls them, made up Egypt's largest political party, the Muslim Brotherhood. The Brotherhood is controversial. Its stated goal is peaceful pursuit of Islamic government. But over its 90 years, members have committed violence. In 2013, El-Sisi outlawed the Brothers as terrorists. But President Trump hasn't designated them a terrorist organization. Nor did President Obama when Andrew Miller was Egypt director in the National Security Council.

Andrew Miller: While individual Muslim brothers clearly have resorted to violence, many have left the party before doing so precisely because they're discontent with the peaceful, gradualist approach of the senior Muslim Brotherhood leadership.

The Brotherhood was one of Egypt's largest education, charity and healthcare associations. Many members are middle class; academics, doctors and lawyers. Modern Egyptian history is a cycle of tension between generals and the Brothers. But this time, critics say, El-Sisi has gone too far.

Andrew Miller: Sisi began by jailing the Muslim Brotherhood and other Islamists. He extended it to secular opposition groups. And now he's even going after poets and artists and bloggers, people you wouldn't normally think of as political activists or primary public players.

Scott Pelley: Why would he do that?

Andrew Miller: Because he views any opposition to him as a threat to his standing and as a threat to his objective. We have to remember, he is a military officer. He spent his entire career in the military before he became president. And the idea that someone wouldn't obey or listen to his orders is anathema to him.

El-Sisi rose in 2011's Arab spring after Egyptians overthrew a dictator and elected the Muslim Brotherhood's Mohammad Morsi. Morsi made El-Sisi Minister of Defense. But Morsi's government was chaotic. He assumed autocratic power. And after a year, there was another uprising. With a good deal of popular support, El-Sisi seized control.

Scott Pelley: They are also the leading political opposition to you. Is that why they have been outlawed?

President Abdel Fattah el-Sisi: No, no, no. We are only dealing with extreme Islamists who are carrying weapons. We would welcome them to live among the people but we don't want them to carry weapons and destroy the Egyptian economy.

Scott Pelley: But he says he didn't have any choice, he was leading a popular revolution against the Morsi government. That's his argument.

Scott Pelley: Mr. President, I've spoken to a number of your countrymen who refuse to call you Mr. President because they say you're a military dictator.

President Abdel Fattah el-Sisi: I don't know who you talked to. But 30 million Egyptians took to the streets to reject the ruling regime at the time. It was a must to respond to their will. Secondly, the maintenance of peace after this period required some measures to restore security.

What El-Sisi calls 'measures to restore security' include the massacre of at least 800 Muslim Brotherhood supporters in Cairo's Rabaa Square. In August 2013, after weeks of protests, Egyptian forces moved in. Among the survivors was Mohamed Soltan, the Egyptian-American imprisoned for reporting false news. Soltan was released 21 months after the Obama administration intervened.

Scott Pelley: Where were you shot?

Mohamed Soltan: I was shot in my left arm. I was rushed to the makeshift hospital where there was blood and bodies, injured bodies, everywhere. Piled upon each other.

The Rabaa Square protest camp was assaulted while El-Sisi was in charge of security.

Scott Pelley: Did you give that order?

President Abdel Fattah el-Sisi: Allow me to ask you a question. Are you closely following the situation in Egypt? From where do you get your information? There were thousands of armed people in the sit–in for more than 40 days. We tried every peaceful means to disperse them.

Scott Pelley: Human Rights Watch issued a report, which you may have seen, describing Rabaa. And it says, and I quote, "using armored personnel carriers, bulldozers, ground forces and snipers, police and army personnel attacked the protest encampment with hundreds killed by bullets to their heads, necks and chests." Was that necessary to the peace and stability of Egypt?

President Abdel Fattah el-Sisi: You are calling the Human Rights Watch report a sound statement. Which is not true. There were police personnel and they were trying to open peaceful corridors for the people to go safely to their homes.

Though El-Sisi told us thousands of protestors were armed, at the time, his government said just over a dozen weapons were found.

Scott Pelley: You're a military man. You were educated by the U.S. military. Does that sound like proportional force to you?

President Abdel Fattah el-Sisi: I don't know how come they had 15 or 16 firearms. I would like to tell the American people the situation on the ground could have destroyed the Egyptian state and caused massive instability, more than could be conceived. Whenever there is an armed confrontation with a big number of people, it's difficult to control the situation and to decide who killed whom.

The situation in his prisons is within El-Sisi's control, and there, according to the U.S. State Department, the killing and torture continue.

Mohamed Soltan: In the last six months of my imprisonment, I was in utter isolation. I was systematically, psychologically tortured.

Scott Pelley: To keep you from sleeping?

Mohamed Soltan: On me, yes, to keep me from sleeping, 36 hours. Strobe light until I got, I went into a seizure. Guards that were assigned to me right outside my cell would pass razors under the doorstep and the officer doctors would tell me, "Hey, Mohamed, cut vertically not horizontally so you can end it faster."

Prison is a tool of politics in Egypt. When El-Sisi ran for re-election last year, he jailed one of his leading opponents and won, his government says, 97 percent of the vote. El-Sisi sees himself as a guardian against the chaos that destroyed Syria, Libya and Yemen. But critics, including Obama national security official Andrew Miller, argue that repression stands to make Egypt more explosive, not less.

Andrew Miller: This is the most repressive government in modern Egyptian history. You have death sentences galore and mass trials. It's, extremely concerning.

Scott Pelley: But Sisi would tell you that he's the reason that Egypt is stable.

Andrew Miller: It's a curious way to describe Egypt to call it stable. Since Sisi took office, living standards have declined. The country is crumbling. The insurgency problem in the Sinai has only gotten worse. It's backed by the Islamic State, entering its sixth year. And you've seen the mass incarceration of peaceful activists alongside hardened jihadists, which threatens to turn more Egyptians to terrorism. That seems to be a recipe for the very instability that Sisi claims he's preventing.

President El-Sisi is fighting terrorism. Last month, a tourist bus was bombed near the great pyramids. The next day, Egyptian forces killed 40 suspects. In 2017, ISIS affiliates murdered Coptic Christians at church and 311 Muslims in a mosque. In our interview, El-Sisi revealed officially for the first time, that his military is cooperating with Israel in the Sinai.

Scott Pelley: Would you say that this is the deepest and closest cooperation that you've ever had with Israel?

President Abdel Fattah el-Sisi: That is correct. The Air Force sometimes needs to cross to the Israeli side. And that's why we have a wide range of coordination with the Israelis.

Scott Pelley: It's been estimated there are about 1,000 terrorists in Sinai. With more than a billion dollars in U.S. military aid every year, why haven't you wiped them out?

President Abdel Fattah el-Sisi: And why hasn't the US eliminated the terrorists in Afghanistan after 17 years and spending a trillion dollars?

Scott Pelley: Why should the American people continue to invest in your government?

President Abdel Fattah el-Sisi: They're investing in security and stability in the region. The United States is in charge of security worldwide.

Scott Pelley: Mr. President, your critics, critics in the United States Congress, critics within the United Nations, say that you are holding tens of thousands of political prisoners. That hundreds of people, unarmed people, have been killed in the streets of Cairo. They claim that you have blood on your hands. How do you explain all of this?

President Abdel Fattah el-Sisi: We are dealing with fundamentalists and extremists which caused damage and killed people over these last years. I can't ask Egyptians to forget their rights or the police and civilians who died.

For now, the White House calculates that fighting terrorism is more urgent than the threat that El-Sisi's repression will ignite another revolt. Egypt's parliament is debating whether to suspend term limits to allow El-Sisi to continue building an Egypt unlike any the modern world has known.