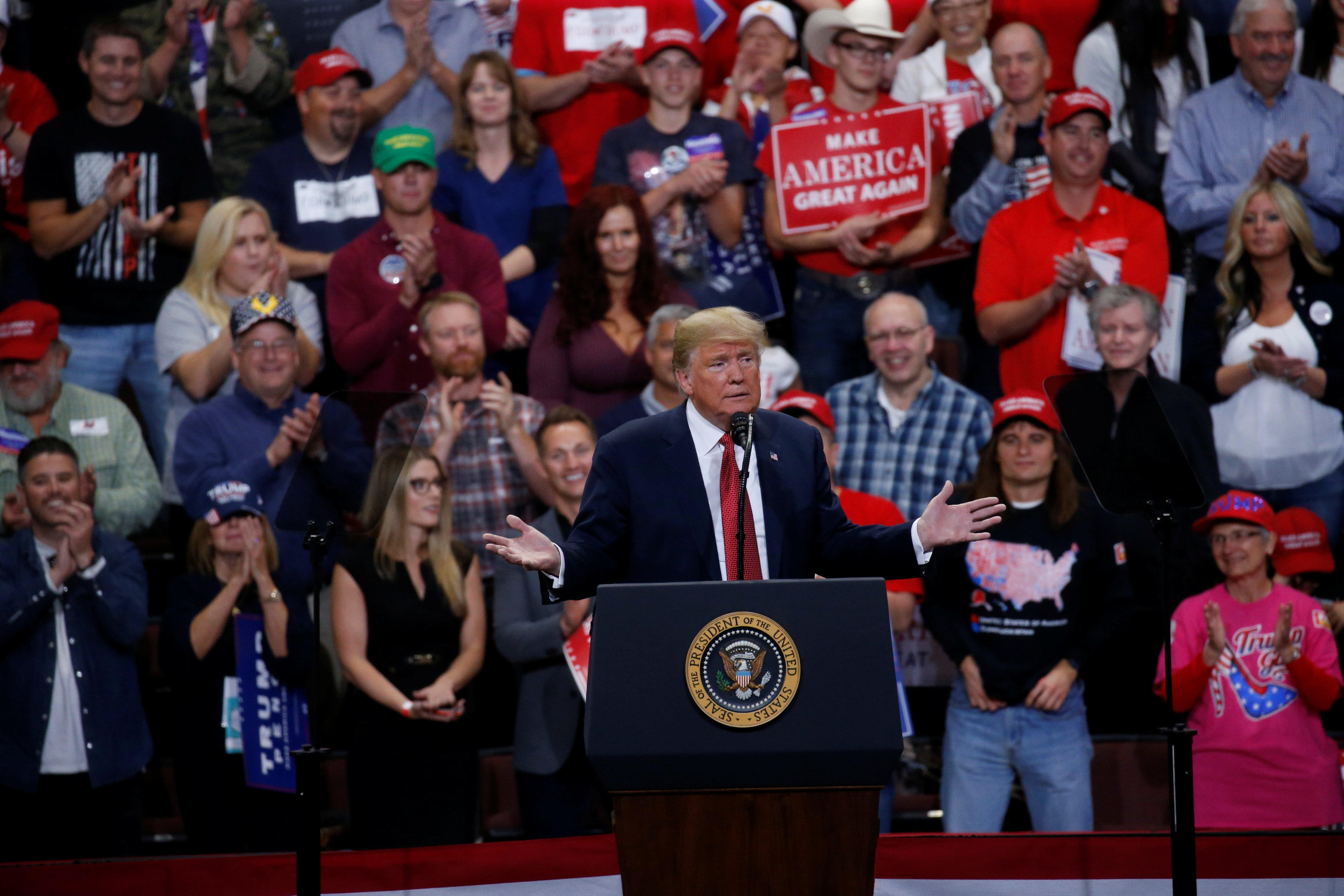 President Trump used a "Make America Great Again" rally in Rochester, Minnesota, Thursday evening, to accuse Democrats of a "rage-fueled resistance" in the battle over his Supreme Court nominee Brett Kavanauagh and motivate his base to vote in the midterms. This is Mr. Trump's third campaign rally so far this week.

Mr. Trump defended Kavanaugh during his rally, saying that polls had shown how voters were rejecting Democratic opposition to the judge.

"Their rage-fueled resistance is starting to backfire at a level that nobody has ever seen before," Mr. Trump said about Democrats in the Senate. Jason Lewis, one of the House candidates whom Mr. Trump was in Minnesota to support, reiterated Minnesota Republicans' support for Kavanaugh when the president brought him to the stage.

Mr. Trump landed in Minneapolis in the afternoon and headed to a fundraiser before traveling to Rochester, friendly territory in the traditionally liberal state, where Republicans are targeting two Democratic districts but playing defense in two GOP-held districts in the Minneapolis suburbs.

Stressing the stakes, Mr. Trump said, "On Nov 6, I need your vote, I need your support to stop radical Democrats and elect proud Minnesota Republicans."

Democrats have argued the investigation was too limited by White House instructions to the FBI, and therefore could not present enough evidence, but key Republicans seem to believe the investigation offered a thorough report.

The report was reviewed by senators on Thursday. A procedural vote on Kavanaugh's confirmation is likely to take place Friday morning, which if passed would limit debate on the issue to 30 hours. The Senate is then expected to vote to confirm Kavanaugh sometime Saturday.

At his recent rally Tuesday in Mississippi, Mr. Trump mocked one of Kavanaugh's accusers, Dr. Christine Blasey Ford, who has alleged that Kavanaugh sexually assaulted her when they were both teenagers. Kavanaugh and Ford testified before the Senate Judiciary Committee last week.

Imitating Ford, Mr. Trump added, "But I had one beer -- that's the only thing I remember," to cheers and applause from the audience.

Mr. Trump's mockery of Ford contrasted the initial strategy of Senate Republicans, who approached her testimony more cautiously, with many saying that she was credible but they believed she was mistaken. Republican Sen. Lindsey Graham has said that he "doesn't doubt something happened to her," but that her story is uncorroborated.

Mr. Trump sent multiple tweets about his continued support for Kavanaugh Thursday morning. "The harsh and unfair treatment of Judge Brett Kavanaugh is having an incredible upward impact on voters. The PEOPLE get it far better than the politicians. Most importantly, this great life cannot be ruined by mean & despicable Democrats and totally uncorroborated allegations!" Mr. Trump wrote in one tweet.

There are a few House races in Minnesota that are competitive, including the state's 1st Congressional District, a seat currently held by a Democrat, which the CBS News Battleground Tracker rates as "Edge Republican." Mr. Trump tweeted that he is lending his support to congressional candidates on Thursday night.

"Just made my second stop in Minnesota for a MAKE AMERICA GREAT AGAIN rally. We need to elect @KarinHousley to the U.S. Senate, and we need the strong leadership of @TomEmmer, @Jason2CD, @JimHagedornMN and @PeteStauber in the U.S. House!" Mr. Trump tweeted.