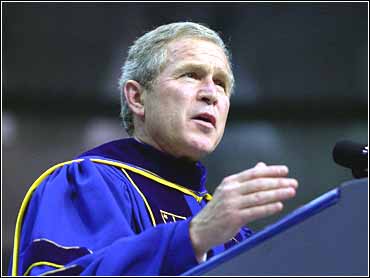 Receiving an honorary degree at one of the nation's best-known Catholic universities Sunday, the president called for a new war on poverty fought with the "weapons of the spirit," reports CBS News White House Correspondent Bill Plante.

Mr. Bush chose Notre Dame as the platform to argue for his controversial program of social services provided by local religious groups but funded with public money.

"Government should never fund the teaching of faith, but it should support the good works of the faithful," he said in his commencement address.

But Mr. Bush's faith-based initiative is under fire from both religious and secular critics, even many who accept the fact that public money already funds many large faith-sponsored charitable organizations.

"Do the critics really want to cut them off?" he asked. "Medicaid and Medicare money currently goes to religious hospitals. Should this practice be ended? Child care vouchers for low-income families are redeemed every day at houses of worship across America. Should this be prevented?"

But skeptics fear that the president's program could often require participation in religious programs in order to receive social services.

"The American people are religious," Rob Boston of Americans United for Separation of Churc and State, told CBS News. "They support these efforts, but they don't necessarily want to see a war on poverty become a war on the separation between church and state.

Mr. Bush offered two new initiatives for his program — next year's budget will triple the amount of money available for low-income housing programs, such as Habitat For Humanity, to $75 million.

CBS News White House Correspondent Mark Knoller reports the president used the first commencement speech of his presidency to announce that he would call corporate leaders to a White House summit this fall to discuss ways they can provide more support to community charities — both secular and religious.

"The federal government will not discriminate against faith-based organizations, and neither should Corporate America," he declared.

But concerns about the faith-based initiative have stalled it in Congress. The president's appearance at Notre Dame was an attempt to build some public support for it — and to continue reaching out to the Catholic voters.

President Bush also urged a new generation of American voters to "revive the spirit of citizenship" and carry on the work of two Democratic presidents — Lyndon Johnson's war on poverty and welfare reforms under Bill Clinton.

"The war on poverty established a federal commitment to the poor. The welfare reform legislation of 1996 made that commitment more effective. For the task ahead, we must move to the third stage of combating poverty in America," Mr. Bush told 2,500 Notre Dame graduates, their families and teachers.

"Our society must enlist, equip and empower idealistic Americans in works of compassion that only they can provide," he said.

"Work and self-respect have been returned to many lives," the president said. "This is a tribute to the Democrats and Republicans who agreed on [welfare] reform, and to the president who signed it: President Bill Clinton."

He did not mention, as Republicans often do, that Mr. Clinton twice vetoed GOP welfare reform bills before signing a third at the urging of political advisers. Mr. Bush did contend that Johnson's policies, though nobly intended, caused some to depend on welfare.

"Our nation has confronted welfare dependency. But our work is only half done. Now we must confront the second problem: to revive the spirit of citizenship — to marshal the compassion of our people to meet the continuing needs of our nation," President Bush said, reading from a TelePrompter.

Rephrasing a Clinton refrain, Mr. Bush said, "Welfare as we knew it has ended. But poverty has not."

With many states seeing the first wave of welfare recipients reach the law's five-year limit, he said the most complicated cases remain: people with no job skills, little education or mental illness.

He said individual acts of kindness will make a greater difference than any government program. "Compassion often works best on a small and human scale," Mr. ush said.