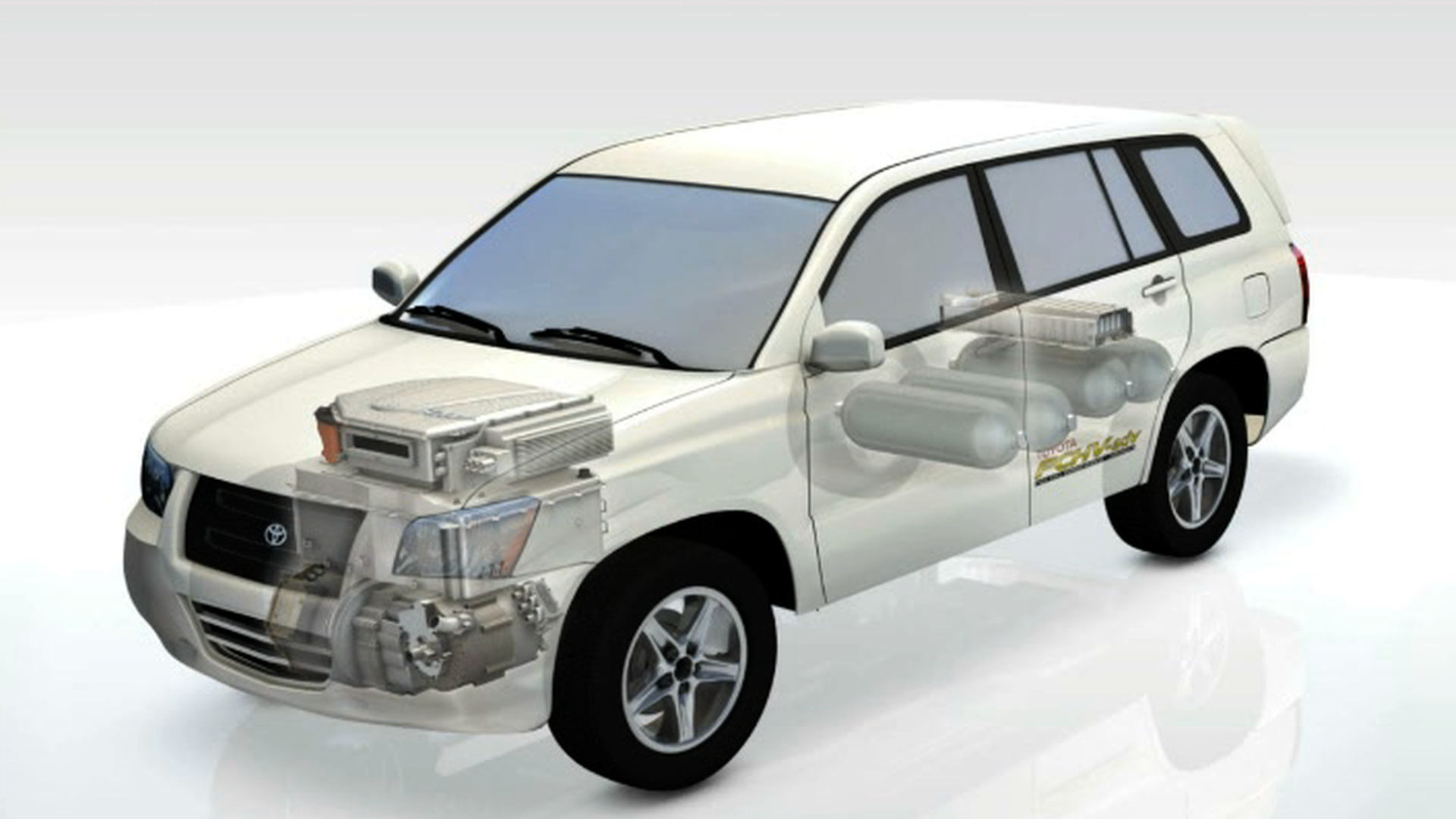 When it comes to cars, Toyota thinks hydrogen fuel cells are one of the technologies of the future. And the company isn't alone.

Offering the promise of a clean ride with long range, it's a technology automakers are racing to perfect, and one they're betting will catch on.

"We see fuel cells as the ultimate answer (down the road) to zero-emission vehicles," Toyota spokesman Wade Hoyt told CBSNews.com. "By 2020, we're going to have fuel cells as an important part of our portfolio."

In the meantime, it's lent prototype hydrogen fuel cell Highlanders to research institutions and government agencies like the Port Authority of New York and New Jersey, as part of a testing and demonstration program.

In these Highlanders, fuel cells produce electricity by mixing oxygen from the air with hydrogen gas stored on board in four high pressure tanks. The byproduct is mostly water, and so instead of the usual cloud, the tail pipe leaves small puddles.

CBSNews.com took one of the vehicles for a spin at New York's JFK airport, where the Port Authority uses the Highlander on loan as part of its regular automotive fleet.

From the start, the car barely made a noise.

"The vehicle is extremely quiet," said Thomas Bosco, the Port Authority's interim director of aviation. "That takes some getting used to."

It glided onto the JFK Expressway, easily keeping up with the surrounding gasoline cars.

"I've heard that the acceleration is equivalent to that of a four-cylinder conventional engine, but I thought it was much better," said Bosco.

The car can travel more than 400 miles without refueling, on par with gasoline cars and more than twice the range of most electric vehicles.

And because the exhaust is mostly water, fuel cell cars emit no harmful pollutants during use. Their overall environmental impact, however, depends on the source of the hydrogen -- the earth's most abundant element, but almost never found on its own.

There are examples in which it can be green. In Hempstead, N.Y., a wind turbine provides the necessary juice to power the process of drawing hydrogen from water. The town is using that hydrogen in a fuel cell fleet.

And there's the technology's biggest hurdle: Lack of infrastructure. According to the Department of Energy, there are just 10 public hydrogen fueling stations in the country. And Toyota acknowledges that the lack of stations presents a major obstacle.

"Until there are more, these vehicles will be limited to fleets like the Port Authority that have access to their own hydrogen supply," said Hoyt. "It's a whole chicken and egg thing."

In May, the government announced a public-private partnership to advance hydrogen infrastructure.

Then there's safety. Remember the hydrogen-filled Hindenburg? So does Toyota. It's equipped its prototype with leak and collision sensors than can shut off the flow of hydrogen. And the automaker has wrapped the hydrogen tanks with carbon fiber, a material it points out is used in bulletproof vests.

Even with the challenges, Toyota isn't the only automaker betting on hydrogen. General Motors and Honda announced a fuel cell partnership in July. Hyundai hopes to sell its versions by 2015.

When it comes to testing them, the Port Authority offers a natural testing ground, said Hoyt.

"Port Authority has the hydrogen, they're interested in advanced vehicles, the majority of their fleet are alternative fuel vehicles, so it's a good fit."