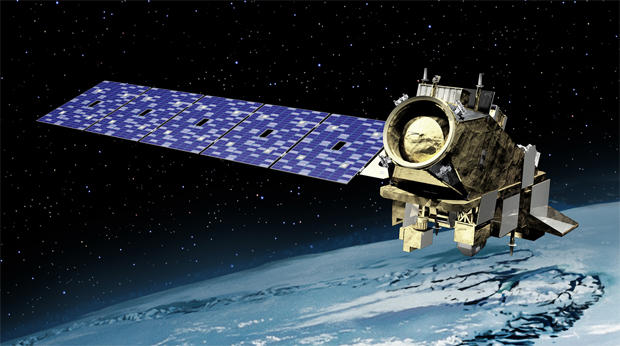 The current three- to seven-day forecasts Americans have come to rely on for planning everything from weekend picnics to hurricane evacuations rely heavily on constant updates from satellites that orbit Earth's poles measuring temperature, moisture and a host of other variables that define the planet's ever-changing weather.

Early Tuesday, NASA plans to launch the first of four state-of-the-art polar orbiters for the National Oceanic and Atmospheric Administration, a $1.6 billion weather satellite that will monitor the entire planet as it rotates below, feeding computer models the data they need to make increasingly accurate predictions.

Forecasters and climatologists say it is difficult to overstate the importance of the new satellite, which will join a once experimental and now aging weather station already in polar orbit to ensure uninterrupted service.

Steve Volz, director of Satellite and Information Service at NOAA, said the first Joint Polar Satellite System spacecraft -- JPSS 1 -- will use "the best technology NOAA has ever flown operationally in polar orbit to capture more precise observations of the Earth's atmosphere, land and waters that will help improve NOAA's life-saving weather forecasts."

Chief program scientist Mitch Goldberg said JPSS 1 will provide that data six times faster than earlier satellites could manage with up to six times the resolution.

"That means we're providing forecast models with much more accurate data," he said. "We also have an imager that can detect wildfires, volcanic eruptions, floods, sea ice, droughts and so on, another instrument that observes ozone and one more that observes Earth's radiation budget."

"JPSS will provide satellite products for ice detection and thickness needed for safe navigation around Alaska and the arctic. We can see volcanic eruptions, ash clouds, which of course impact aviation, we can see small fires before they can become larger to give a head start to firefighters.

The National Oceanic and Atmospheric Administration plans to spend $11.3 billion to develop instrumentation and to build, launch and operate a fleet of four Joint Polar Satellite System spacecraft through 2038.

The relatively low-altitude polar orbiters will work in concert with the more familiar Geostationary Operational Environmental Satellites -- GOES -- weather stations that provide hemispheric views from their lofty perches 22,300 miles above the equator.

But it is the polar orbiters that provide the lion's share of the data needed by the computer models used by forecasters.

Built by Ball Aerospace, JPSS 1 is scheduled for launch from Vandenberg Air Force Base, California, at 1:47 a.m. PST (GMT-8) Tuesday atop a United Launch Alliance Delta 2 rocket. The satellite's $1.6 billion price tag includes the cost of the rocket and operational support.

The Delta 2, equipped with nine solid-fuel strap-on boosters for additional liftoff power, will boost JPSS 1 into a 512-mile-high polar orbit that will repeatedly carry the spacecraft across the equator at 1:30 p.m. local time. After three months of tests and checkout, the satellite will go into normal operation.

JPSS 1 will share its orbit with Suomi NPP, a satellite launched in 2011 to serve as a test bed for the sophisticated instruments featured in the Joint Polar Satellite System spacecraft. While it was launched as a research satellite, Suomi NPP is now considered operational.

The once experimental instruments aboard Suomi NPP proved their worth during this year's hurricane season when Harvey, Irma and Maria wreaked widespread flooding and devastation. In all three cases, NOAA satellites supported accurate forecasts that gave residents time to make preparations.

"In ll of these events, the death rates were well below previous historic storms, such as Katrina," said Louis W. Uccellini, director of the National Weather Service. "The well coordinated preparedness decisions for these storms were based on forecasts that rely on global numerical prediction systems.

"The forecasting that you've seen are impossible without robust, high-quality global measurements of the atmosphere required to initialize our numerical weather prediction systems. Polar satellites are the only way to obtain global temperature and moisture measurements, and they are the backbone of the global observing system that we use to make these predictions of extreme events."

The JPSS system "will provide continuity of critical, global Earth observations, including our atmosphere, oceans and land through 2038."