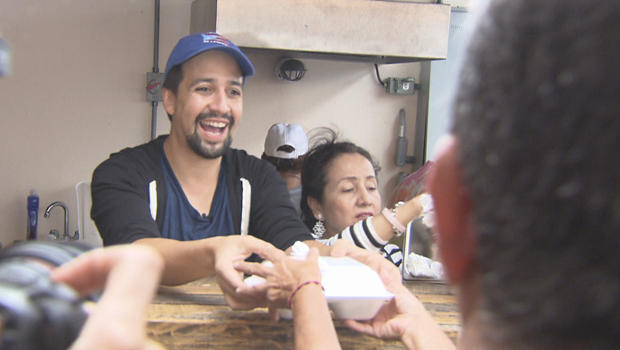 One of the biggest names in musical theater -- the star and creator of "Hamilton" -- has plunged right into his NEXT ACT. It's in a place a long way from Broadway, but very close to his heart, as David Begnaud shows us:

As the creator and star of the Broadway sensation, "Hamilton," Lin-Manuel Miranda is used to getting mobbed by adoring crowds. But the crowds that greeted him a few days ago in Puerto Rico were different. They weren't there just to applaud him they wanted to thank him.

In the aftermath of Hurricane Maria, Puerto Rico is still reeling. Fifty-three days later, much of the island remains without power and running water. Many roads and bridges are still out.

Since the storm, the 37-year-old Miranda has been using his voice, and his fame, to sound the alarm.

Begnaud asked, "What is expected of you, as a Puerto Rican?"

"Well, it's complicated, because I didn't grow up here, so it's this weird mix of I will do anything to support the island, but I also don't for a second pretend I know what's best for the island, because I don't live here," he replied. "My job is to amplify the concerns of Puerto Rico."

While Miranda wasn't born on the island, his parents were, and Lin-Manuel spent summers as a child visiting his grandparents in Vega Alta, outside San Juan.

"They were such a constant in my life," he said. "They never missed a play. They'd fly to New York to come see me in the school play. I think of them so much."

He walked through what was left of his grandparents' home. "They bought this property and the only thing that was here was the porch. And they built the house around that," he said.

Here, as on much of the island, there is little left.

"The metaphor is, you know, Hurricane Maria just wiped us out, but this footprint is still here, this porch is still here, and we are still here," he said. "And as long as we're still here and we are trying, we're gonna rebuild this house. And we're going to rebuild it with solar panels on top. The metaphor is we have an opportunity in the wake of tragedy to rebuild, and rebuild smarter, and rebuild better. And that's the hope with this house, and that's the hope with our island."

The day after Maria hit, Miranda did what he does best: he wrote a song, "Almost Like Praying," inspired by "Maria," from "West Side Story," to raise money to help the devastated island. He rounded up some of the world's biggest Latino stars -- from J-Lo to Rita Moreno -- to perform:

Released on October 6, it hit #1 on iTunes in 17 countries. All the profits go to a fund to help the Caribbean island recover.

"Through the Hispanic Federation, not even including 'Almost Like Praying,' we've raised just shy of $20 million," Miranda said.

"How much money has the song alone brought in?" asked Begnaud.

But as he was finishing the song, Miranda got caught up in a controversy on Twitter war with President Trump:

"No. Those were the only words I had on the occasion," Miranda laughed. "You know, disasters are moments when leaders unite us, you know? They're no one's fault, and he starts attacking people on the front lines."

Last week, Miranda hop-scotched the island, an unofficial goodwill ambassador. In Isla Verde, he made sandwiches at a relief kitchen. He was moved to tears from the welcome he received with his parents, Luis and Luz, looking on.

Begnaud said, "I thought of the two of you as I watched you walk around the island right behind him today. The pride a parent must feel to watch their son give such honor to the place where they're all from."

"And that people are so proud of him," said Luis. "That's, you know, in my town they remember him when he was a little boy. And that pride that you see -- you made us proud of who you are."

Miranda then visited an aid distribution center in San Juan, where he met with the mayor, Carmen Yulín Cruz.

Begnaud asked her, "When he comes here, what does it do?"

"It's a boost," Cruz replied, "and it brings joy to people's hearts."

When he wasn't making friends, he was making headlines. On Tuesday, he announced a $2.5 million fund to help residents get back on their feet.

On Wednesday, he announced he'll return in the lead role in "Hamilton" for a three-week run at the University of Puerto Rico in January 2019.

"It's weird; just yesterday the Smithsonian announced that I donated my act two costume to the Smithsonian. I need it back!" he laughed.  "Just three weeks!"

"Aren't you too young to be donating things to the Smithsonian?" Begnaud laughed.

Thousands of tickets will be sold for just $10, though more expensive travel packages will be offered for sale to help bring tourism back to this home away from home.

Celebrated for his musical about the immigrant who became a founding father, Lin-Manuel Miranda has found his next act.

"Puerto Rico will come back stronger," he replied. "I have nothing but faith in the character and the resilience and the brilliance of the Puerto Rican people. If they're given a fair shot to come back, we'll have an even better Puerto Rico than before."

For the man who achieved fame and fortune through his musical about an immigrant who became a founding father, Lin-Manuel Miranda says giving back is the least he can do…