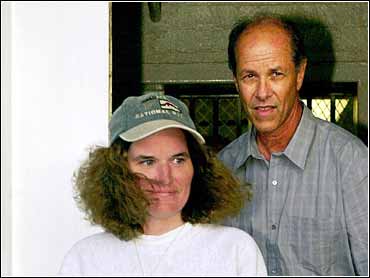 Paula Poundstone was jailed Tuesday by a judge who said the comedian suffered a relapse during treatment at a drug and alcohol rehabilitation center where she was sent after pleading no-contest to child endangerment.

A downcast Poundstone was taken out of the courtroom in handcuffs after she admitted violating probation.

The residential treatment program had sent a progress report alerting Los Angeles County Superior Court Judge Bernard Kamins that Poundstone suffered a relapse involving the use of unprescribed drugs or medications, according to the prosecutor.

The specific substance was not stated in court and neither the prosecutor nor her attorney would elaborate afterward.

Poundstone came to court with a dozen supporters and staff members of Promises, the Malibu treatment center.

"If someone has a dirty test or missed test I would remand them to custody," Kamins explained to her. "I would intend to do that in your case."

Kamins did not specify how long Poundstone would remain in county jail, saying it could be anywhere from two days to a month.

"You are going to admit you are in violation?" he asked her.

A sheriff's deputy then placed her in handcuffs as many of her supporters cried.

Poundstone, who has three adopted children and had two foster children until her June 27 arrest in Malibu, was originally charged with three counts of committing a lewd act on a girl under age 14 and endangering two other girls and two boys.

She pleaded no-contest on Sept. 12 to felony child endangerment and misdemeanor inflicting injury on a child, and the lewd conduct charges were dropped. Poundstone blamed drinking for some of her problems but insisted there was no lewd conduct.

She was sentenced last month to 180 days at Promises, including the 125 days she had already voluntarily spent there.

Poundstone's relationship to the children in the case and the alleged actions that led to the charges were not released by prosecutors. Her attorney has said that in one instance witnesses believed she appeared intoxicated while driving with children.

Deputy District Attorney Gina Satriano said outside court that relapses are common in such cases and "it doesn't mean there's still not progress. There has to be some consequence for a relapse."

She would not detail what happened and defense attorney Steven Cron refused comment.

Cron told the judge that Poundstone had booked a performing engagement for Dec. 6, the day after she was to be released from rehabilitation. The judge said she may not be able to do that because he was considering extending her time at Promises.

"If she has relapsed, I'd like her to stay in it a little longer," he said. "If you're in custody it's very hard to do performances."

The judge, who presides over a special drug court, commented: "Alcohol or drug addiction is a disease not so much as a crime."

He set another progress report for Dec. 5 but said he wants Poundstne to come on a "field trip" before that date to witness his drug court in action.