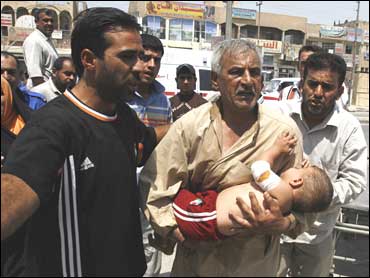 The Harry Potter film, a hugely hyped fantasy about a young English wizard, weaved magic at the North American box office, whipping up a record $93.5 million in the first three days after its release, according to studio estimates issued Sunday.

"Harry Potter and the Sorcerer's Stone," which reportedly cost Warner Bros. Pictures $125 million to produce and an additional $40 million to market in North America alone, surpassed the three-day record of $72.1 million held by 1997's "The Lost World: Jurassic Park."

Based on the bestselling children's books by English author J.K. Rowling, "Harry Potter" opened Friday in 3,672 theaters across the United States and Canada, and also in Britain where it is known as "Harry Potter and the Philosopher's Stone."

"It's just a win-win all the way around for us," Fellman said. Warner Bros. is owned by AOL Time Warner Inc., which used other units such as its flagship America Online business to promote the film.

The film grossed $31.3 million in its debut Friday, the highest single-day take ever, according to distributor Warner Bros.

The previous record-holder was "Star Wars: Episode I - The Phantom Menace," which took in $28.5 million on opening day in 1999.

The movie about the world's most popular wizard opened in the U.S. immediately after midnight Friday. Hordes of children had no trouble convincing their parents to waive their usual bedtimes and let them attend midnight screenings of the eagerly-awaited film.

Some of the moviegoers and theater owners were decked out in Harry Potter attire - wizard caps and Harry's trademark large spectacles.

Other children got up early Friday for 6 a.m. and 8 a.m. screenings of th film. Most kids had their parents in tow. But not many minded.

A Philadelphia-area woman says the two and a half hour-long movie sped by in what seemed like just ten minutes.

A dad says his kids may not do well in their schoolwork Friday, but, it was worth it.

A sleepy 7-year-old girl in Atlanta couldn't help comparing the movie to the book.

"They cut a lot out of it," she said, allowing as how she did like the movie, just the same.

Theater owners say they don't think all of the adults in the audience will be parents.

“For months and months, we've been receiving calls about when the first opportunity to see 'Harry Potter' will be, and we realized many of these calls were from adults. It's an 8-to-80 thing,” says Tom Kiefaber, owner of The Senator theater in Baltimore.

In Wisconsin, some pupils are being given the OK to play hooky so they can see the movie.

One middle school has organized a field trip to send some 300 seventh graders to see the likely blockbuster. Another school is sending some 400 students. A third group of schools will send at least 2,000.

Teachers call it educational, saying the wildly popular series of books on which the movie is based has gotten a lot of kids reading.

When Rowling's fourth book - Harry Potter and the Goblet of Fire - was released in July 2000, children lined up at bookstores the day before for midnight parties.

Kiefaber said he was following the hugely successful pattern established with "Star Wars: Episode I: The Phantom Menace," which was shown at the Senator and on hundreds of other screens in early-morning hours on its first day in release, in 1999.

Not everyone is happy about the movie. A fundamentalist group in Lewiston, Maine, that objects to references to magic and witchcraft in "Harry Potter and the Sorcerer's Stone" wanted to have a book burning in a city park when the movie opened. Denied a permit, members of the so-called Jesus Party decided to use scissors instead and cut up copies of the book.

Warner Bros. was scheduled to begin shooting a sequel Monday, with hopes that Harry Potter will become a huge franchise along the lines of the "Star Wars" and James Bond films.