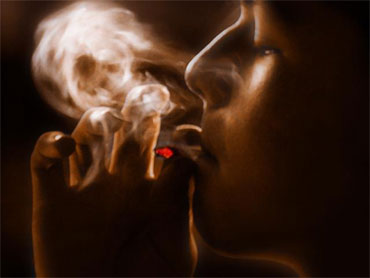 Smoking marijuana is becoming even more popular among U.S. teens and they have cut down on smoking cigarettes, binge drinking and using methamphetamine, according to a federal survey released Monday.

More teens also are getting high on prescription pain pills and attention-deficit drugs, according to eighth, 10th and 12th graders surveyed by the University of Michigan for the National Institute on Drug Abuse.

The increase of teens smoking pot is partly because the national debate over medical use of marijuana can make the drug's use seem safer to teenagers, researchers said. In addition to marijuana, fewer teens also view prescription drugs and Ecstasy as dangerous, which often means more could use those drugs in the future, said White House drug czar Gil Kerlikowske.

The "continued erosion in youth attitudes and behavior toward substance abuse should give pause to all parents and policy-makers," Kerlikowske said.

"These latest data confirm that we must redouble our efforts to implement a comprehensive, evidence-based approach to preventing and treating drug use," Kerlikowske, the director of the Office of National Drug Control Policy, said in remarks prepared for his Monday speech at the National Press Club in Washington.

"The upward trending of the past two or three years stands in stark contrast to the steady decline that preceded it for nearly a decade," said Lloyd Johnston, who has directed the annual survey since it started in 1975. 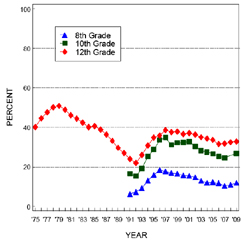 "When the perception of the danger goes down, in the following years you see an increase in use," said National Institute on Drug Abuse Director Nora Volkow.

Volkow said teens falsely reason it's less dangerous to get high on prescription drugs "because they're endorsed by the medical community." But she said prescription narcotics like OxyContin and Vicodin are highly addictive and can act as gateways to heroin, a cheaper high.

Use rates of both prescription narcotics rose among this year's 10th graders, with 8.1 percent saying they had used Vicodin in the past year compared with 6.7 percent of the same grade in 2008. For OxyContin, the figure rose to 5.1 percent from 3.6 percent.

By all measures, alcohol remained the most widely used illicit substance among teens, with 43.5 percent of 12th graders reporting taking a drink in the past month. That's a little change from last year, but down from 52.7 percent in 1997 - a year that showed high percentages of substance abuse. All three grades reported drops in binge drinking for 2004-2009.

"There's not going to be much further improvement unless policies change," such as higher taxes to discourage kids on a budget and further limits on public smoking, Johnston said.