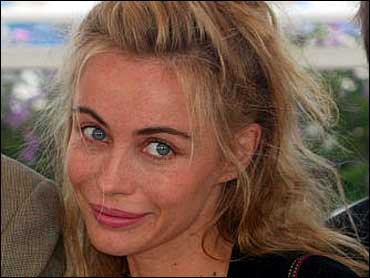 French actress Emmanuelle Beart wore white for the Cannes premiere of the World War II movie "Stranded." But people have been paying more attention to what she wasn't wearing when she posed for the cover of Elle.

Ads for the magazine - which shows Beart bathing naked - are tacked up all over France. In the photo, she's gazing into the distance with her back toward the camera.

Beart, 37, the star of "Mission: Impossible," said there was a "raison d'etre" for the cover shot.

Danes, who shot to fame with the 1990s series about an angst-ridden teen, is taking her first step into action flicks with "Terminator 3: Rise of the Machines."

Danes accompanied star Arnold Schwarzenegger and other cast members to the Cannes Film Festival to promote the movie, which opens July 2.

"It wasn't like I was itching to do an action movie," Danes told The Associated Press.

"But this is such a great franchise, if I was going to do an action movie, I couldn't really do better than 'Terminator,"' said Danes, whose film career has centered on quieter, character-driven films like "The Hours."

In the upcoming movie, Danes plays a woman who teams up with Schwarzenegger's cyborg to fight a female terminator.

After his hit Cuban music documentary "Buena Vista Social Club," the German director was showing "The Soul of a Man," a movie about three legendary bluesmen.

It's the first installment of "The Blues," executive-produced by Martin Scorsese. Scorsese and Clint Eastwood are among the directors making movies for the seven-part series.

Wenders said he hopes to get young music fans excited about the genre - "the root of all they listen to."

Years after retiring from the screen, Italian actress Gina Lollobrigida is getting ready to make her world premiere as a sculptor.

Lollobrigida, 74, says she's been working on her art for 10 years "in secrecy and silence." She's done with the jet-setting actor's lifestyle.

"That kind of social life no longer interests me," she told Nice-Matin newspaper.

Lollobrigida is getting ready to show her bronzes this year in Moscow, Venice and Paris. Some of the works represent characters she played, including Esmeralda from 1957's "The Hunchback of Notre Dame."

Lollobrigida was back in Cannes more than 50 years after making a splash here in the original "Fanfan la Tulipe," a 1952 swashbuckling movie. Penelope Cruz plays her role in the remake that debuted in Cannes.

"She's pretty, she acts well, but I don't know her," Lollobrigida said. "However, I wish her all the success that I had in my career."
Written by Angela Doland