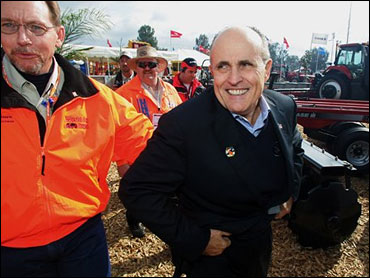 "This is the most sweeping restructuring that we've had since 1992. We've targeted it at reducing our overhead and our administrative costs," Potter told The Associated Press.

There were numerous budget cuts, too. One reason the stamps for the new rates have not yet been issued (September 20th) is that there was no money in last fiscal year's budget to print additional stamps. Stamps released this month are counted against this fiscal year's ledger.

"Headquarters and headquarters-related staff positions will be redefined to focus on priorities and results," Potter said. He has established a new marketing organization to supervise service and product development, pricing and sales.

In an opinion piece for The Washington Post last Sunday, Potter's predecessor, William J. Henderson, called for the privatization of the U.S. Postal Service, now a government-owned corporation.

"For all the ways in which the Postal Service already resembles a private company, it lacks the advantages of any other corporation, such as being able to turn on a dime when it comes to rate changes, perhaps raising prices at times of high demand and lowering prices to entice customers during traditionally slow times," he wrote.

"And unlike a private company, the Postal Service has a universal service obligation, meaning it must deliver everywhere, six days a week," he added. The trade-off, he admitted, is that the Postal Service is the only company allowed to deliver the mail in the United States. "It should give up that protection for the greater benefits of privatization," the 26-year postal person said.

The two regional offices that will close are the Mid-Atlantic in Columbia, Md., and the Midwest in St. Louis. Post offices in the Richmond area will be supervised from Washington, while offices in the Carolinas, Kentucky and West Virginia offices will report to Philadelphia.

Midwestern offices will be divided between the Great Lakes region, headquartered in Bloomingdale, Ill., and the Western region in Denver.

By Lloyd A. de Vries
©MMI CBS Worldwide Inc. All Rights Reserved. This material may not be published, broadcast, rewritten, or redistributed. The Associated Press contributed to this report