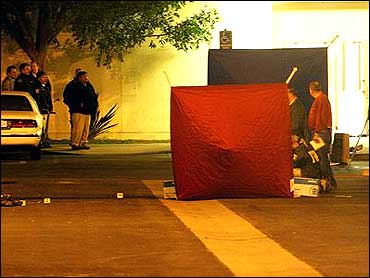 A woman wounded in a rampage by a former postal worker died Wednesday, and investigators said the assailant also killed a former neighbor just before the attack, bringing the death toll to eight.

A former plant worker said the attacker, 44-year-old Jennifer Sanmarco, had made racist comments in the past, and at least six of the victims were minorities, but investigators have refused to discuss a motive in the slayings.

The eighth victim, Beverly Graham, 54, was found Tuesday, dead of a gunshot wound to the head, at a Santa Barbara condominium complex where the former postal employee lived up until a few years ago.

It is unclear why Sanmarco killed her victims, but the U.S. Postal Inspector says that "chances are" she knew and chose her victims, CBS News affiliate KCBS reports.

A neighbor of Graham's reported hearing a gunshot Monday evening, before Sanmarco went to the mail-processing center.

Sanmarco shot six postal employees to death and committed suicide in what was believed to be the nation's deadliest workplace shooting by a woman. It was also the nation's bloodiest shooting at a postal installation in nearly 20 years.

A postal worker who was shot in the head, Charlotte Colton, 44, died of her wounds Wednesday, said Teresa Rounds, spokeswoman for Santa Barbara Cottage Hospital.

Former plant worker Jeff Tabala recalled that Sanmarco seemed particularly hostile to Asians while working for the Postal Service. He said all of the dead were minorities: Three were black, one was Chinese-American, one was Hispanic and one was Filipino.

The shooter had a long history of mental problems, officials said. She had been placed on a medical leave from her postal job for psychological problems.

In 2003, Tabala said, he saw sheriff's deputies pull Sanmarco out from under a mail-sorting machine and wheel her away in handcuffs on a mail cart after a disturbance.

She returned several months later but "people started coming to me and saying, 'She's acting erratically,"' Tabala said. "She was screaming. She was saying a lot of racist comments. It was pretty ugly."

Sanmarco was escorted out of the building by management and never returned, Tabala said.

"She seemed to be having conversations and there wasn't anyone around her. She'd be just jabbering away." Tabala said.

Graham's boyfriend, Eddie Blomfield, said Sanmarco would often go outside singing loudly, which led to arguments between the women. Graham's brother Les Graham Jr. said his sister had complained about a woman who "used to come out and rant and rave in front of her building."

Investigators gave no motive for the postal rampage but said Sanmarco had been put on medical leave in 2003 for psychological reasons and had to be removed from the building once.

Authorities in New Mexico, where Sanmarco moved in 2004, also described her increasingly bizarre behavior after she lost her job. Police were contacted about Sanmarco at least twice after she was accused of harassing an office worker and appearing naked at a gas station. She was dressed when officers arrived.

A deputy clerk for the city of Milan, N.M., said Sanmarco applied for a business license in 2004 for a publication called "The Racist Press" that she said she planned to launch.

"We weren't sure what she was going to do next," said Terri Gallegos, deputy clerk for the city of Milan, New Mexico, where Sanmarco applied for a business license in 2004 for a publication called "The Racist Press" that she said she planned to launch. Another time she said she wanted to register a cat food business.

During one meeting, Gallegos said, Sanmarco carried on a conversation with herself "like she was arguing with someone but there was no one there."

Last March, office workers called authorities after the 44-year-old woman made what Gallegos described as a rude allegation. Other times, Gallegos said, Sanmarco would come in and simply stare at one employee in particular.

In June, police talked to her after someone at a gas station called to complain of nudity, Police Chief Marty Vigil said. Sanmarco was dressed when officers arrived.

U.S. Postal Inspector Randy DeGasperin told reporters Tuesday that Sanmarco left the mail facility on a medical leave in 2003 after her co-workers expressed concerns she might hurt herself. He said police removed her from the building once.

Authorities said it was unclear whether Sanmarco targeted specific employees when she arrived at the postal center about 9 p.m. Monday. But DeGasperin said "chances are" she knew the people she was shooting at.

Police said Sanmarco entered the sprawling Santa Barbara Processing and Distribution Center by driving through a gate behind another car. She gained entry to the building by taking an employee's identification badge at gunpoint. That worker was not hurt.

Only about 80 of the approximately 300 people who work at the mail-sorting center were on hand when Sanmarco arrived. Authorities said many of them fled to a fire station across the street when the shooting began.