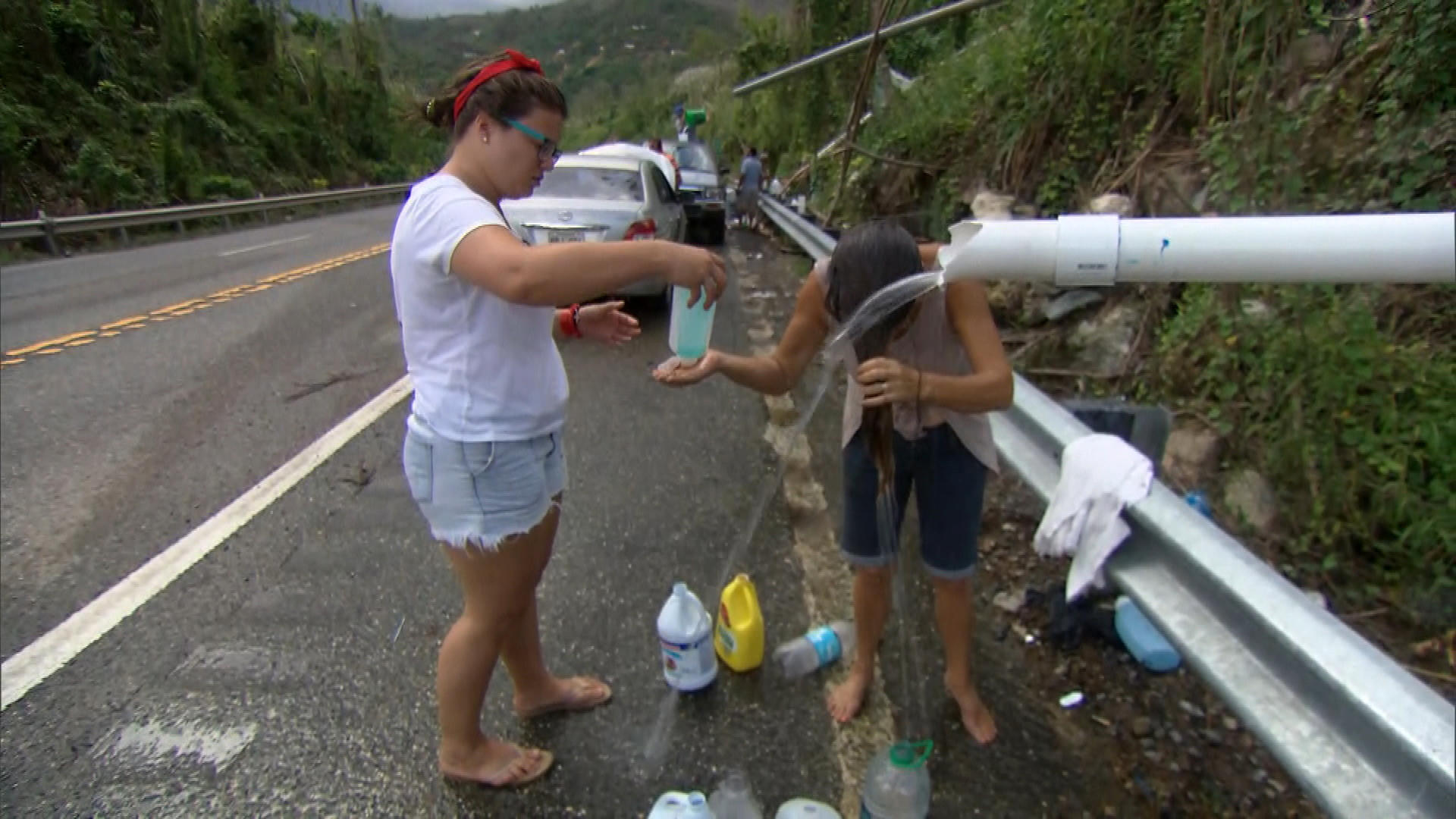 A visitor to Puerto Rico can almost immediately tell which direction the wind blew when Hurricane Maria swept across the island at 155 miles an hour. Almost 50 days after the storm, the downed trees, telephone poles and power lines still point the way.

Every day and night in San Juan, there are blackouts. But having electricity at all is a privilege, since most of the island is still without power.

"At night, it really quiets down because it's dark," says 60 Minutes associate producer Jack Weingart. "The street lights are out, and most homes and businesses are also dark. So at night, you just hear this constant humming of the generators."

But generators aren't designed to run constantly for weeks on end, so eventually they break down. Then the backup generators, now largely responsible for powering a city, fail.

Such is life in Puerto Rico 46 days after the storm.

Weingart, along with producers Graham Messick and Michael Karzis and associate producer Vanessa Fica, recently traveled to Puerto Rico with correspondent Steve Kroft to report this week for 60 Minutes. As they traveled throughout the island, the dire status on the ground surprised them most.

"It's really still in an emergency mode," Karzis says. "They haven't graduated into a relief mode or recovery."

Héctor Pesquera, a retired special agent in charge of the F.B.I. office in Miami, is now directing emergency services and public safety for the island. On the broadcast, he tells Kroft that the first priority is restoring power.

"The electrical grid, to me, is the backbone of all these things starting to come up," he tells Kroft. "Until we get this grid thing resolved, it's going to be very slow. It's the backbone of everything."

The ripple effects from the island's power problems are paralyzing the island's society. Without electricity in most areas, offices are shuttered, so many people have lost their jobs, and with them, their incomes. And there's no way for many people to access their cash; banks are closed and ATMs don't work. Without power, the water treatment facility doesn't function, and without running water, many citizens must rely on bottled water to drink and rainwater to wash their clothes.

Inland, spouts of PVC pipe connected to mountain creeks jut out into the street. In the isolated mountain town of Utuado, people congregate around the flowing water — water that has likely been contaminated — and use it to wash their hair and clothes. They bucket the water to take it home and use it for their toilets.

Phone calls are unreliable. "If you have cell service, you're lucky to have it," Weingart says. "It could go out at any minute." When the 60 Minutes team did find service, their calls would usually drop. When a call actually went through, it would sometimes be diverted to a stranger's phone because the lines got crossed.

"Money's not coming in," Weingart explains. "And people are constantly spending money just to stay afloat. So you're not working, you're not getting a paycheck, and you're probably spending upwards of $1,000 on fuel each month to keep your generator running."

For many Puerto Ricans, the best answer to their daily struggle is to leave. Some are calling it the JetBlue solution. Since Puerto Ricans are American citizens, the only transaction necessary to move to the mainland U.S., where many have family, is a plane ticket.

"People are really prideful that they're from Puerto Rico, and that this is their home," Weingart says. "[But] I met a lot of families who were making the decision to leave for good, mostly because they're not making any money, and they don't see a way forward. Their homes were destroyed. Their cars were destroyed. They lost their jobs in the wake of the storm."

More than 100,000 people have left the island since Maria struck on September 20th, and the governor's office estimates many of them will move to the mainland permanently.

"That's a huge number," Karzis says. "These are folks, for the most part, that were teetering on the edge of their decision to stay or go, and Maria seems to have pushed them over the edge."

Every day at the San Juan airport, families tearfully break apart, bidding goodbye to the members heading off to start a new life on the mainland. As public schools reopened in San Juan, parents came by to request their children's school records so their kids could enroll in schools in places like Florida and New York.

At one elementary school, associate producer Vanessa Fica met a family relocating to Boston, where they intend to live in a shelter. For them, a Boston shelter is better than staying in San Juan, where they've been subsisting on Coca-Cola and potato chips.

"And that's just the reality that a lot of people have there," Fica says. "It's just no hope."

But what does this exodus mean to an already crippled island?

"It means a territory, which is already fiscally circling the drain, having the tax base erode even further," Karzis says. "It does not help that you're losing otherwise qualified professionals or a labor force that is dwindling. And what you're left with are folks that are older, and are collecting pensions at this point, or young kids."

Almost seven weeks after the storm, producer Graham Messick says, it feels like some Puerto Ricans have given up.

"They'd lost hope," he says. "And it's like a state of suspended animation. People were just waiting for the power to come on. There's just nothing to do. It's boring. It's hot. It's uncomfortable."

"And there are no answers. "