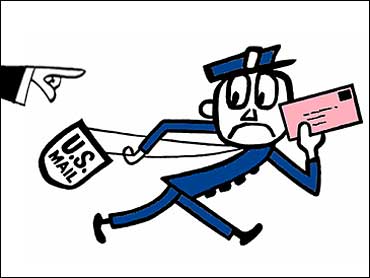 Battered by the economy, the post office is offering early retirement to 150,000 workers, cutting management and closing offices, the agency said Friday.

The Postal Service lost $2.8 billion last year and is facing even larger losses this year, despite a rate increase - to 44 cents for first-class mail - scheduled to take effect May 11.

The agency said it will reduce management staff nationwide by 15 percent, with more than 1,400 processing, supervisor and management posts at 400 facilities being eliminated.

And another 150,000 postal workers will be offered early retirement.

The agency also made early retirement offers last year but unions discouraged their members from accepting the offers and they were not widely used. The post office did not say if the new proposal would include financial incentives.

The American Postal Workers Union issued a statement Friday saying: "Retirement is a personal matter, and the union defers to the decisions of employees who meet the qualifications."

However, the union said it continues to challenge the Postal Service's authority to offer voluntary early retirement without including severance pay.

The 80 district across the country will be reduced by six with the closings in Lake Mary, Fl.; North Reading, Mass.; Manchester, N.H.; Edison, N.J.; Erie, Pa.; and Spokane, Wash.

District offices handle administrative functions and officials said the closing should not affect local mail delivery. The closings were expected to take about five months.

The first quarter of the fiscal year - October through December - is usually the post office's busiest, but it still posted a loss of $384 million for the period.

Officials said the economic recession contributed to a 5.2 billion piece mail volume decline compared to the same period last year. If there is no economic recovery, the Postal Service projects volume for the year will be down by 12 billion to 15 billion pieces of mail.

In addition, it is negotiating an agreement with the National Association of Letter Carriers to adjust carrier routes to reflect diminished volume.

Postmaster General John Potter has even asked Congress to consider allowing the agency to cut mail delivery back to five days-a-week to save money.

The post office does not receive a taxpayer subsidy for its operations.