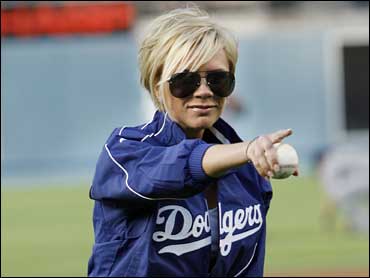 A Beckham was on the pitch — only it was Victoria Beckham and she was at Dodger Stadium.

In a nearly empty Dodger Stadium, the wife of soccer star David Beckham played catch with Dodgers pitcher Derek Lowe in preparation for throwing out the ceremonial first pitch.

That was filmed, as was a conversation with Hall of Famer Tommy Lasorda, a longtime manager of the Dodgers who is now a club executive.

NBC has signed a deal for six episodes of a 30-minute unscripted series chronicling the former Posh Spice's relocation from Europe with her husband, who has signed to play with the Los Angeles Galaxy of Major League Soccer.

Beckham is in Spain finishing out his contract with Real Madrid, which ends June 30.

"Mid-July, I reckon," she said when asked about when the move to California will take place. "As a family, we're really excited about moving to L.A. He's looking forward to coming to a Dodgers game as well."

Beckham, also wearing white shorts, white high-heeled sneakers and oversized sunglasses, said she was "really nervous" about delivering the ceremonial first pitch. But many of her practice tosses to Lowe in the area behind home plate were on target.

"I've been to lots of soccer stadiums, but this is something else," she said. "I'm going to do the best I can. It's a huge honor for me. David's going to be watching at home."

"OK, I love the Dodgers," she replied with a smile.

The reality show might air this summer. It will be produced by Simon Fuller, the "American Idol" magnate who managed the Spice Girls pop group that included Beckham.