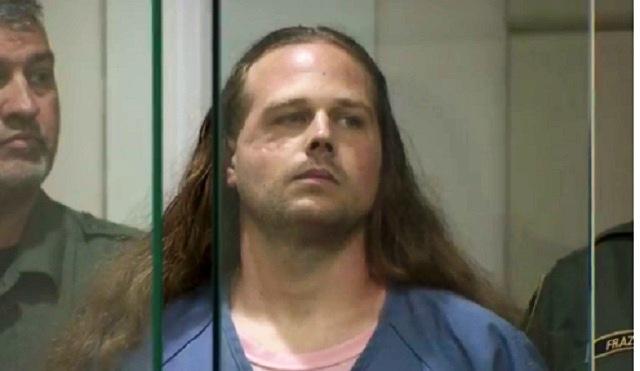 PORTLAND, Ore. -- Jeremy Joseph Christian, the man charged with fatally stabbing two men and injuring a third who tried to shield young women from an anti-Muslim tirade, appeared to brag about the attacks as he sat in the back of a police patrol car, saying "that's what liberalism gets you," according to court documents.

The probable cause affidavit filed Tuesday offers the most complete official account to date of the events that unfolded Friday on a light-rail car packed with commuters eager to get home for the Memorial Day weekend.

Christian, 35, shouted "You call it terrorism! I call it patriotism!" and "Death to the enemies of America!" as he made his first appearance in the case Tuesday. Christian did not enter a plea and has another court date June 7.

Defense attorney Gregory Scholls did not return a call for comment after the hearing.

A probable cause affidavit describes a chaotic scene on the train from the moment Christian boarded.

He was drinking sangria from a large, bladder-style bag and began shouting anti-Muslim slurs once he spotted the two young women.

Both are black and one was wearing a Muslim head covering, according to the affidavit signed by Multnomah County Deputy District Attorney Ryan Lufkin.

One passenger tried to intervene and was not hurt. The women moved away from the defendant.

A third passenger, Micah Fletcher, stood up as well and pushed Christian hard enough to make him stumble, the affidavit said.

Christian pulled a folded knife from his pocket and concealed it in his hand. As a shoving match ensued, the documents say Christian stabbed first Fletcher, then Namkai-Meche. A fourth passenger, Ricky Best, tried to come to their aid and was immediately stabbed as well.

Best, 53, died on the train and Namkai-Meche died at the hospital a short time later. Fletcher survived and was released from the hospital Monday. He attended Christian's court hearing but did not speak with reporters.

Autopsies showed both victims died from stab wounds to their necks and Best also had a fractured vertebra. The stab wound to Fletcher's neck "missed being a fatal injury by millimeters," court papers said, quoting his doctors.

In the patrol car, Christian can be heard on surveillance video saying he stabbed three people in the neck and that he can "die a happy man," according to court papers.

The Pacific Northwest has been a leader on many socially liberal fronts including raising the minimum wage and legalizing recreational marijuana but the region has a long and violent history of white supremacist and other racist activities.

Many of the early settlers to Oregon were from Southern states and brought with them negative attitudes about blacks, said Karen Gibson, a professor of urban studies at Portland State University. Currently, more than 70 percent of Portland is non-Hispanic white and only about 6 percent of the city's population is black, according to the most recent U.S. Census data.

"The idea that Portland is so liberal supersedes this dark, hidden secret about racism," Gibson said.

One of the most infamous attacks in Portland's racial history occurred in November 1988, when an Ethiopian immigrant named Mulugeta Seraw was beaten to death with a baseball bat by three white supremacists in front of his apartment.

The White Aryan Resistance lost a multi-million dollar civil lawsuit in 1990 that crippled the organization, but the murder left an indelible mark on the city.

As a memorial to Friday's stabbing victims grew, one large chalk message stood out, streaked by rain under a gray sky: "Remember Mulugeta Seraw."

Friday's attack happened on the first day of Ramadan - the Muslim holy month, marked by daily fasting from dawn to sunset - and is the latest in a series of apparent hate crimes in the region.

In March, an Iranian refugee living in the suburb of Troutdale found his home painted with racist graffiti and death threats. In December, prosecutors charged a man with a hate crime after police said he chased down and killed a black teenager with his car in the suburb of Gresham.

Earlier this year, organizers of a small community parade affiliated with the city's famous Rose Festival canceled the celebration over fears of violence after protesters said the local Republican Party had plans to allow a "neo-Nazi hate group" to march with them. Local GOP leaders denied the charges.

For years, Portland was the home base for Volksfront, a now-defunct white separatist organization founded in 1994, according to the Southern Poverty Law Center, which tracks hate groups.

"I don't have that feeling like it can't happen here - the way people talk about Portland - because we've got racism. We've got all kinds of things," said Murr Brewster, who came to see a memorial at the city's transit center.

Mayor Ted Wheeler asked the organizers of rallies set for June 4 and June 10 to cancel because of fears it could further enflame tensions. The June 4 event organized by the group Patriot Prayer is billed on its Facebook page as a Trump Free Speech Rally in "one of the most liberal areas of the West Coast."

Rally organizer Joey Gibson denounced Christian's actions, which he told CBS News correspondent Mireya Villarreal others are using against him.

"That's the frustrating part, is they're trying to use this to control me, to make me stand down, and I won't do it," he told Villarreal.

After initially seeking to revoke the rally's permit, Wheeler said he is now looking for the best way to protect free speech and personal safety.

Villarreal asked Gibson if he could assure people that his group won't incite violence.

"I cannot ensure that some crazy person's going to show up and make a horrible decision," he said. "I can't control everybody. I don't want them at the rally, and they'll be kicked out."

He acknowledged to the Associated Press that Christian had shown up at a Patriot Prayer rally on April 29 with a baseball bat and had made the Nazi salute. But Gibson said he hurled insults at rally organizers as well as counter-protesters.