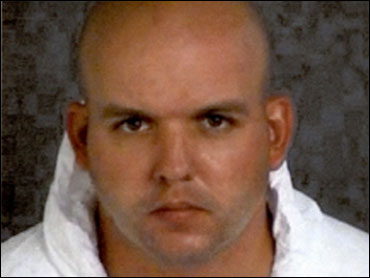 SAN FRANCISCO (AP) The son of a late San Francisco pornography mogul was scheduled to be arraigned Tuesday on suspicion of killing his former girlfriend and fleeing with their 1-year-old daughter.

James Raphael Mitchell, the 27-year-old son of the late "Behind the Green Door" director Jim Mitchell, was being held on suspicion of murder, kidnapping and violating a restraining order.

His ex-girlfriend, Danielle Keller, 29, was found beaten to death Sunday evening in the backyard of her mother's home in Novato, north of San Francisco.

A Novato police spokesman, Sgt. Earl Titman, said officers recovered what they think is the murder weapon, but he would not say what it was.

A neighbor, Lynn Treboutat, said she saw Mitchell run from the home with his screaming daughter, Samantha, then drive away Sunday evening. The toddler's 1st birthday party was held at the home Sunday, Treboutat said.

Mitchell was arrested about five hours later off Interstate 80 in Citrus Heights after police found him and the girl, who was unharmed, authorities said.

He was being held without bail in Marin County Jail, where a jail report listed his occupation as a theater owner. His lawyer, former San Francisco District Attorney Terence Hallinan, wouldn't comment on the allegations. 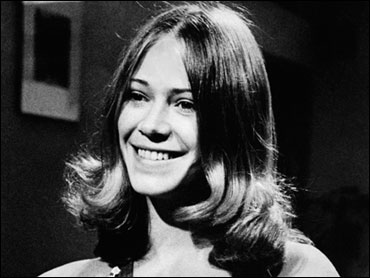 (AP Photo/Reed Saxon)
Photo: Marilyn Chambers was the fresh face that catapulted the Mitchell brother's biggest film, "Behind the Green Door," to fame.

In 1969, the Mitchell brothers opened a still-running adult theater in San Francisco. In their heyday, the brothers faced multiple arrests on obscenity charges.

Jim Mitchell was convicted in 1991 of manslaughter and weapons charges in the shooting death of his brother in Marin County. The slaying led to a spectacular trial, and the elder Mitchell served half of a six-year prison sentence.

He died on July 12, 2007, two years to the day before the alleged murder and kidnapping involving his son.

James Mitchell and Keller had been in a "pretty combustive and combative relationship" for about two years, said Keller's mother, Claudia Stevens.

Keller had sole custody of Samantha and had obtained a restraining order against Mitchell, Stevens said.

Meanwhile, dozens attended a candlelight vigil for Keller on Monday night. They marched from the Novato police station to her home, calling for more awareness to domestic violence.