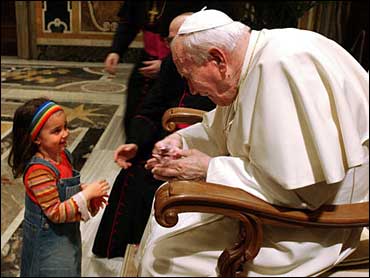 Pope John Paul II on Saturday denounced the war against Iraq as threatening the "fate of humanity" in his first public comments on the U.S-led attacks.

"When war, as in these days in Iraq, threatens the fate of humanity, it is ever more urgent to proclaim, with a strong and decisive voice, that only peace is the road to follow to construct a more just and united society," John Paul said. "Violence and arms can never resolve the problems of men."

The pontiff said that peace is "a gift of God and a humble and constant achievement by men."

John Paul, with impassioned speeches and Vatican diplomacy, lobbied against war and in favor of a negotiated solution in the months before the conflict.

He made his remarks Saturday in an address at the Vatican to members of an Italian religious television channel, Telepace.

A few hours after the war began, the Vatican expressed "deep pain" and faulted both sides for failing to find a peaceful solution, but until Saturday, the pope himself had not spoken publicly about the attacks.

John Paul has said there is no legal or moral justification for military action. He has also expressed concern that war would harm relations between Christians and Muslims.

Before the war, the pope sent a cardinal to Washington to plead with President Bush not to attack, and another cardinal to Baghdad to press Saddam Hussein to cooperate completely with U.N. weapons inspectors.