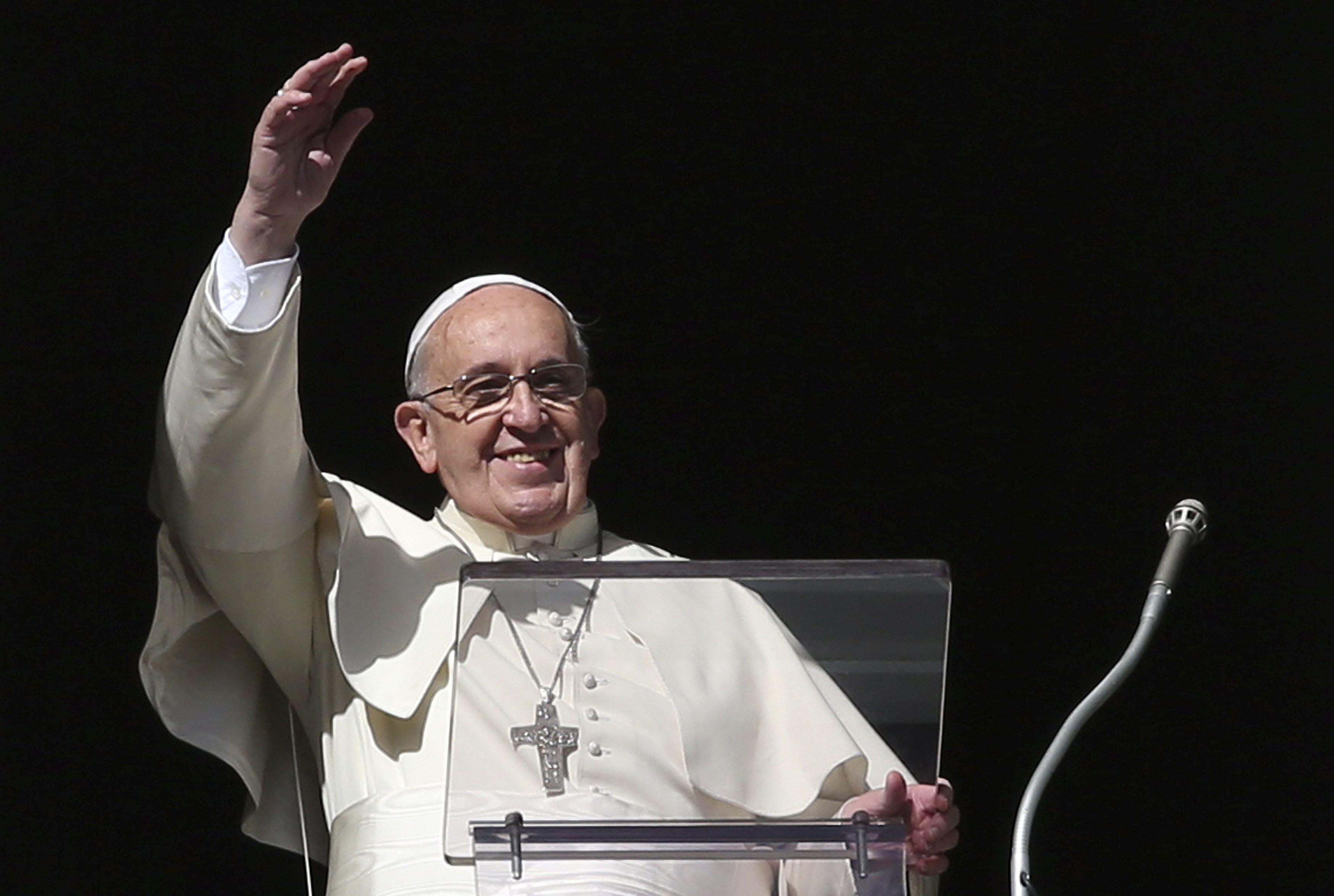 VATICAN CITY -- Pope Francis is seeking to reassure the church's right-wing base that he's not a renegade bent on changing church doctrine on family issues - weeks after a Vatican meeting of bishops initially proposed a radical welcome for gays and divorced Catholics.

Francis on Monday opened an interreligious conference on the "complementarity" of men and women in marriage and sex. He said marriage between a man and woman is a "fundamental pillar" of society and that children have the right to grow up with a mother and father.

It was the second papal speech emphasizing church doctrine in as many days: On Saturday, Francis pronounced some of his strongest words yet against abortion, euthanasia and in vitro fertilization, sounding more like his predecessor, Emeritus Pope Benedict XVI, than the Argentine Jesuit who famously said "Who am I to judge?" about gays.

Vatican officials concurred that the interventions could be read as a response to the conservative backlash that erupted after the recent meeting of the world's bishops on family issues. The meeting's organizers, who were hand-picked by Francis, initially proposed a revolutionary welcome toward gays and civilly remarried Catholics, following Francis' exhortation that the church must welcome all.

Gay rights groups and liberal Catholics cheered, even though the bishops scrapped the welcome in their final document.

Conservative Catholics, already uncomfortable with Francis' lack of emphasis on doctrine, reacted with outright alarm after the synod, fearing that Francis eventually might lead the church into uncharted territory that would compromise church teaching on homosexuality and the indissolubility of marriage.

In the heat of the synod, the recently demoted Cardinal Raymond Burke called on Francis to issue a statement clarifying his position, saying the lack of clarity had "harmed" the church and caused confusion.

Francis appears to be obliging.

"Complementarity (between men and women) is the basis of marriage and the family, which is the first school where we learn to appreciate our gifts and those of others and where we learn the art of living together," Francis told the conference Monday. "Children have the right to grow up in a family, with a mother and a father who can create a suitable environment for their development."

While Francis has said such things before - he famously led the church's opposition to legalizing gay marriage in his native Argentina - his comments now appear clearly aimed at calming conservatives.

The synod process will conclude with another meeting of bishops in October next year, after which Francis is expected to issue a document of his own.

This week's three-day conference gathers representatives from 14 religions to share their remarkably similar views about the complementarity of men and women in sex and marriage. Speakers Tuesday include the Rev. Rick Warren, one of most prominent evangelical pastors in the United States, and the Rev. Russell Moore of the Southern Baptist Convention, the biggest Protestant denomination in the U.S.

The conference is being organized by the Vatican's Congregation for the Doctrine of the Faith, whose conservative prefect, Cardinal Gerhard Mueller, helped lead opposition to Francis' radical agenda at the synod.

Conference organizers have stressed that this week's meeting was not a response to the synod and was planned last year. But the timing couldn't have been better to reinforce the conservative view on traditional family values.

During his remarks, Francis confirmed that he would travel to the U.S. next year to participate in a rally for families in Philadelphia. The Vatican said the other planned legs of the September, 2015 trip to Washington and New York weren't yet confirmed.

Philadelphia Archbishop Charles Chaput, who was present for the announcement, said he was "overjoyed" by the pope's announced visit, reports CBS Philadelphia station KYW-TV.

"A hallmark of his papacy has been a keen focus on the many challenges that families face today globally. His charisma, presence and voice will electrify the gathering," Chaput said.