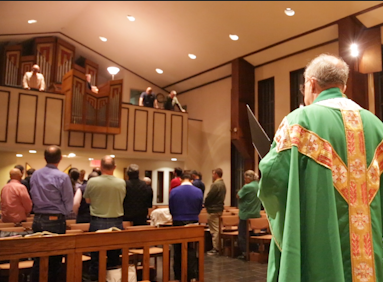 NEW YORK -- After Roman Catholic bishops meeting at the Vatican failed to agree on the issue of homosexuality in the church, Pope Francis appeared barely able to contain his frustration, cautioning the bishops Saturday not to cling to doctrine with "hostile rigidity" and saying the next day that "God is not afraid of new things."

Back in the U.S., Catholics in one particular congregation were even more vocal.

"I think what we should do is to stop calling the American bishops 'bishops,' and start calling them homophobes," said the Rev. Joe Akus, a priest who ministers to a congregation called Dignity, a network of LGBTQ Catholics with dozens of branches and thousands of members across the country.

The two-week long conference of bishops, known as a synod, was convened to discuss a range of issues facing Catholic families. In a dramatic development midway through the assembly, a draft statement was released supporting almost-revolutionary acceptance of gays, rather than condemnation, acknowledging the "gifts" they had to offer the church.

However, following alarm expressed by conservative bishops, the language was watered down to say that "people with homosexual tendencies must be welcomed with respect and sensitivity," while reaffirming that marriage is only between a man and woman. That revised paragraph failed to garner enough support to be included in the synod's final document, though there will be another conference of bishops held on the topic a year from now, in which the debate is likely to be rekindled.

"We are paying attention (to the synod) because there is the hope that a change in at least approach will help people who are afraid, and we don't want people to be afraid--of being gay, of being Catholic, and especially of being gay and Catholic," said Akus. "But for us here, we're gonna do what we're gonna do, and what we've been doing here at Dignity New York for the past 42 years."

For 33 years, Akus has been saying Mass at the Episcopal Church of St. John, which serves as the group's de facto parish and headquarters. Established in 1972 by Jesuit priest John MacNeill, Dignity New York is a leading chapter of Dignity USA, a nonprofit organization that supports LGBTQ people in accepting and expressing their sexuality as consistent with Catholic teachings. McNeill's 1976 book "The Church and the Homosexual" is still considered by Dignity members to be 'the bible' on religion and sexuality.

"The bishops are not the Catholic church," said Akus, expressing disappointment at what he called the clergy's renewed backpedaling on the issue. "There's been all kinds of documents and all kinds of levels of acceptance and non-acceptance."

"If they really follow through and are consistent, that's good, but I don't see how the church has any business dictating people's behavior, the business of the church is to proclaim the Kingdom of God," said the Rev. Dan McCarthy, who also performs liturgies for the Dignity congregation. He said he's been around for too long to rely on Vatican hierarchy for such guidance.

"I've been homosexual for 75 years and a priest for about 48 years, it's no longer a novelty to me."

"These are guys who have been dealing with Roman Catholic bishops for over 40 years," said Brendan Fay, an LGBTQ activist who made a documentary about McNeill, Dignity New York's founder. Fay and his husband were married at a Dignity service 11 years ago.

"We may not personally need the affirmation [of Vatican bishops] because we have found that among ourselves."