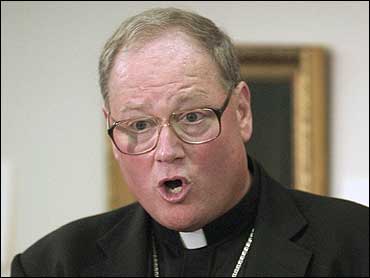 Milwaukee Archbishop Timothy M. Dolan, a defender of Roman Catholic orthodoxy who led the elite seminary for U.S. priests, becoming known for his energy, wit and warmth, was named archbishop of New York on Monday.

The Vatican said Dolan would succeed Cardinal Edward Egan, 76, who is retiring as archbishop after nearly nine years. The post is the most prominent in the American Catholic Church. Pope John Paul II called the job "archbishop of the capital of the world."

The New York archdiocese is the second-largest in the U.S., behind the Archdiocese of Los Angeles, serving 2.5 million parishioners in nearly 400 churches.

It covers a region from Manhattan to the Catskill mountains, and includes a vast network of 10 colleges and universities, hundreds of schools and social service agencies, and nine hospitals that treat about a million people annually.

Dolan's selection continues a chain of Irish-American bishops that was broken only once in the history of the archdiocese, when French-born prelate John Dubois was appointed in 1826.

Yet, Dolan, 59, takes over at a time of growing diversity in the local church, with a sizable and growing Latino population in the New York-area. He speaks Spanish, among other languages, and can preach and celebrate the sacraments in Spanish.

When Egan became New York's archbishop, the archdiocese had an annual $20 million operating deficit. Egan closed or merged about two dozen parishes as the Catholic population shifted to the suburbs, where new schools were being planned. He said he wiped out the budget shortfall.

On Sept. 11, 2001, and the days after the terrorist attacks, he led worship in St. Patrick's Cathedral for thousands of shaken New Yorkers. Last year, the cardinal hosted Pope Benedict XVI in his first U.S. visit as pontiff, an event marked by festive crowds in the tens of thousands.

But unlike many previous New York archbishops, Egan did not embrace the chance for a broad public role in the city. Some priests circulated an anonymous letter in 2006, accusing the cardinal of arrogance and of ignoring the pastoral needs of priests and parishioners. Egan called the complaints a "vicious attack."

Dolan was sent to Milwaukee under challenging circumstances. His predecessor, Archbishop Rembert Weakland, had abruptly retired after news broke that the archdiocese had paid a $450,000 settlement to a man claiming Weakland tried to sexually assault him. Weakland admitted an "inappropriate relationship" but denied abuse.

The Rev. Jim Connell, moderator of the Milwaukee Presbyteral Council, a panel of archdiocesan priests, called Weakland's departure a "very sad and tragic situation" for local clergy. But he said Dolan reached out to them, distributing his e-mail and phone number, and calling them on their birthdays, the anniversary of their ordinations, or just to say hello.

A year after Dolan took the Milwaukee post, about a quarter of his priests signed a public letter saying that celibacy should be optional for future clergy. Dolan disagreed, but did so without apparent bitterness, emphasizing how much he appreciated the clergymen and their work.

"This is the time we priests need to be renewing our pledge to celibacy, not questioning it," Dolan wrote. "The problems in the church today are not caused by the teachings of Jesus and of his church, but by lack of fidelity to them."

Dolan began his path to the priesthood as a boy. A St. Louis native and the oldest of five children, Dolan has said he would set up cardboard boxes with sheets to make a play altar in the basement. He attended a seminary prep school in Missouri and by 1985, earned a doctorate in church history from The Catholic University of America.

After working as a parish priest and professor, Dolan spent seven years as rector of the North American College in Rome, considered the West Point for U.S. priests, where he had studied for his own ordination years earlier.

He served briefly as an auxiliary bishop in the Archdiocese of St. Louis before his 2002 appointment to Milwaukee, which serves about 675,000 parishioners and 211 churches.

Dolan is an outspoken opponent of abortion, comparing the moral urgency of the issue to ending slavery. The American Life League, an anti-abortion group that has pressured Catholic bishops to speak out more forcefully on the issue, called Dolan "one of our pro-life heroes."

However, he does not deny Holy Communion to Catholic lawmakers who support abortion rights, nor does he single them out publicly. He thinks each parishioner should decide whether he or she should receive the sacrament. Every other year or so, he has invited Catholic city and state officeholders for a daylong session on church teaching and public life.

Dolan had served as a point-person for abuse claims for several months in St. Louis and was confronted with years-old unresolved abuse cases in Milwaukee.

In 2004, he joined the minority of U.S. bishops who publicly released the names of local diocesan priests who had been credibly accused of molesting children. The archdiocese posts the names on its Web site and updates the list when needed.

However, the Survivors Network of those Abused by Priests has accused him of, among other things, failing to work more closely with civil authorities to publicly identify accused clergy from the independently governed religious orders who work in the archdiocese.

In 2006, the archdiocese agreed to a nearly $17 million settlement involving abusive former Milwaukee priests who had worked in California. Insurance covered half the claim, but Dolan said that the archdiocese's share put its annual budget in the red, contributing to a $3 million deficit last year. Dolan had to cut about a fifth of the jobs in the archdiocese. He hoped to sell a 44-acre archdiocesan property, the Cousins Center, but the sale stalled.