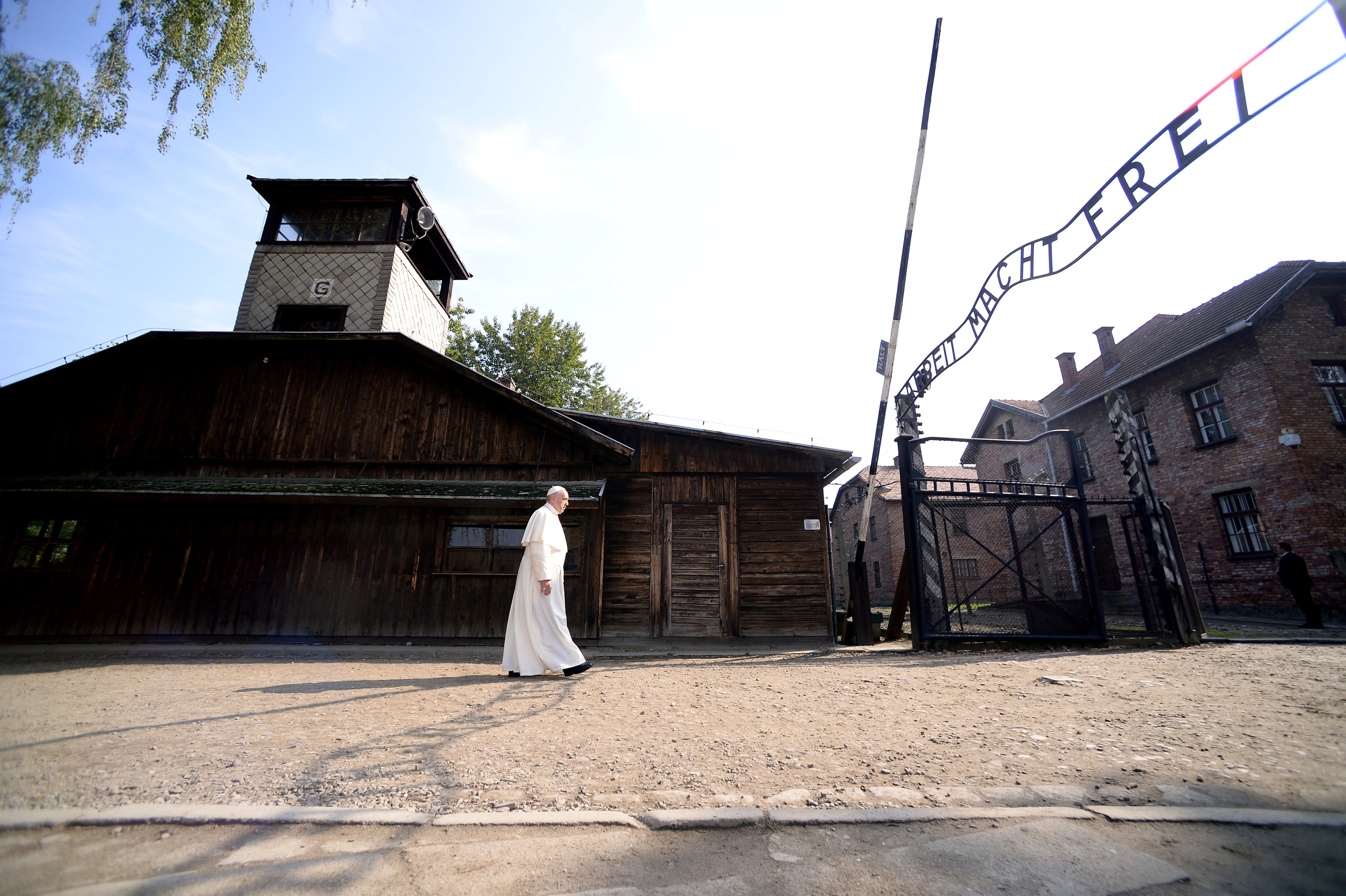 OSWIECIM, Poland -- Pope Francis paid a somber visit in silence to the Nazi German death camp of Auschwitz-Birkenau on Friday, writing a guest book entry begging God's "forgiveness for so much cruelty."

The Argentine-born pontiff made an early morning pilgrimage to the place where Adolf Hitler's forces killed more than 1 million people, most of them Jews, during World War II.

Francis entered the camp on foot, walking slowly in his white robes beneath the notorious gate at Auschwitz that bears the cynical words "Arbeit Macht Frei (Work sets you free)."

His white vestments were a sharp contrast to the barbed wire of the dark place, CBS News correspondent Seth Doane reports.

Among the 11 survivors he met briefly was a woman in her mid-90s who helped deliver babies born to Auschwitz women; another, 101, played the violin in an orchestra at the death camp.

Francis moved on to nearby Birkenau, a sprawling complex where people were murdered in factory-like fashion in its gas chambers. There he greeted 25 Holocaust rescuers, including a woman who as a child helped her mother smuggle in bread in their handbags to Jews forced by Nazi occupiers to stay in Warsaw's ghetto.

Altogether, it was a deeply contemplative and private visit of nearly two hours that Francis passed in total silence, except for a few words he exchanged with the survivors and rescuers.

Vatican and Polish church officials said Francis wanted to express his sorrow in silence at the site, mourning the victims in quiet prayer and meditation.

However, he did express his feelings, writing in the Auschwitz memorial's guest book in Spanish: "Lord, have mercy on your people! Lord, forgiveness for so much cruelty!" He then signed with his name in Latin, "Franciscus" and added the date "29.7.2016."

Only hours later did he finally speak out about his feelings as he addressed pilgrims from a window of the archbishop's residence in Krakow.

He said: "How much pain? How much cruelty? Is it possible that we humans created in God's image are capable of doing these things? ...Cruelty did not end in Auschwitz, in Birkenau."

The pope continued: "Many prisoners are tortured just to make them talk. It's terrible. Today, there are men and women in overcrowded prisons. They live - forgive me - like animals. Today, there is this cruelty. We say, yes, there we saw the cruelty of 70 years ago, how people died being shot or hanged or with gas.

"Today in many parts of the world where there is war, the same thing is happening."

Francis is the first pope to visit Auschwitz who did not himself live through the brutality of World War II on Europe's soil.

Both of his predecessors had a personal or historical connection to the site. St. John Paul II, born in Poland, witnessed the unspeakable suffering inflicted on his nation during the German occupation during the war. His successor, Pope Benedict XVI, who visited in 2006, was a German who served in the Hitler Youth for a time as a teenager.

Francis prayed silently for more than 15 minutes before greeting survivors one by one, shaking their hands and kissing them on the cheeks. He then carried a large white candle to the Death Wall, where prisoners at Auschwitz were executed.

At the dark underground prison cell that once housed St. Maximilian Kolbe, a Polish friar who sacrificed his life to save that of a fellow prisoner who had a family, Francis prayed again. A few shafts from a tiny window were the only light cast on the pontiff.

He then traveled 2 miles to Birkenau, the vast satellite camp where the Nazis murdered Jews, Roma and others from across Europe.

Invited guests, among them camp survivors and Christian Poles who saved Jews during the war, stood in respect as the pope arrived, his vehicle driving parallel to the rail tracks once used to transport victims to their deaths there.

At one point the deep silence was broken by the wailing of an infant.

When Francis arrived, the hundreds of guests applauded. Francis slowly observed each of the memorial plaques in the 23 languages used by the inmates.

Poland's chief rabbi, Michael Schudrich, then recited, in Hebrew, Psalm 130, which starts: "From the depths I have cried out to you, O Lord."

Francis clasped his hands and bent his head as the psalm was read, first by the rabbi and then by a priest in Polish.

John Paul's visit to the site in 1979 made history because it was the first ever by a pontiff, part of the Vatican's historical efforts at reconciliation with Jews.

As a pope hailing from another continent, Francis' presence highlights the universal importance of a site that in recent years has drawn ever more visitors from around the world. The millions who now visit have put increasing stress on the site's aging barracks, prompting urgent conservation efforts that are being funded by governments worldwide.

Francis' visit is also different in that it had a private character with no speeches. Benedict, for instance, spoke there in 2006 in Italian - pointedly avoiding his native German language - in a speech questioning why God was silent at the slaughter of so many.

The pope's visit to Auschwitz came on the third day of a five-day visit to Poland that includes meetings with young pilgrims taking part in World Youth Day, a global celebration of faith.

Francis devoted Friday to the theme of suffering. He also visited a pediatric hospital in Krakow and in the evening was presiding over a Way of the Cross with the young people.

At the hospital, Francis lamented what he called "a culture of waste" tainting developed countries' societies.

"And the victims of the culture of waste are those who weakest and most frail, and this is indeed cruel," he said.