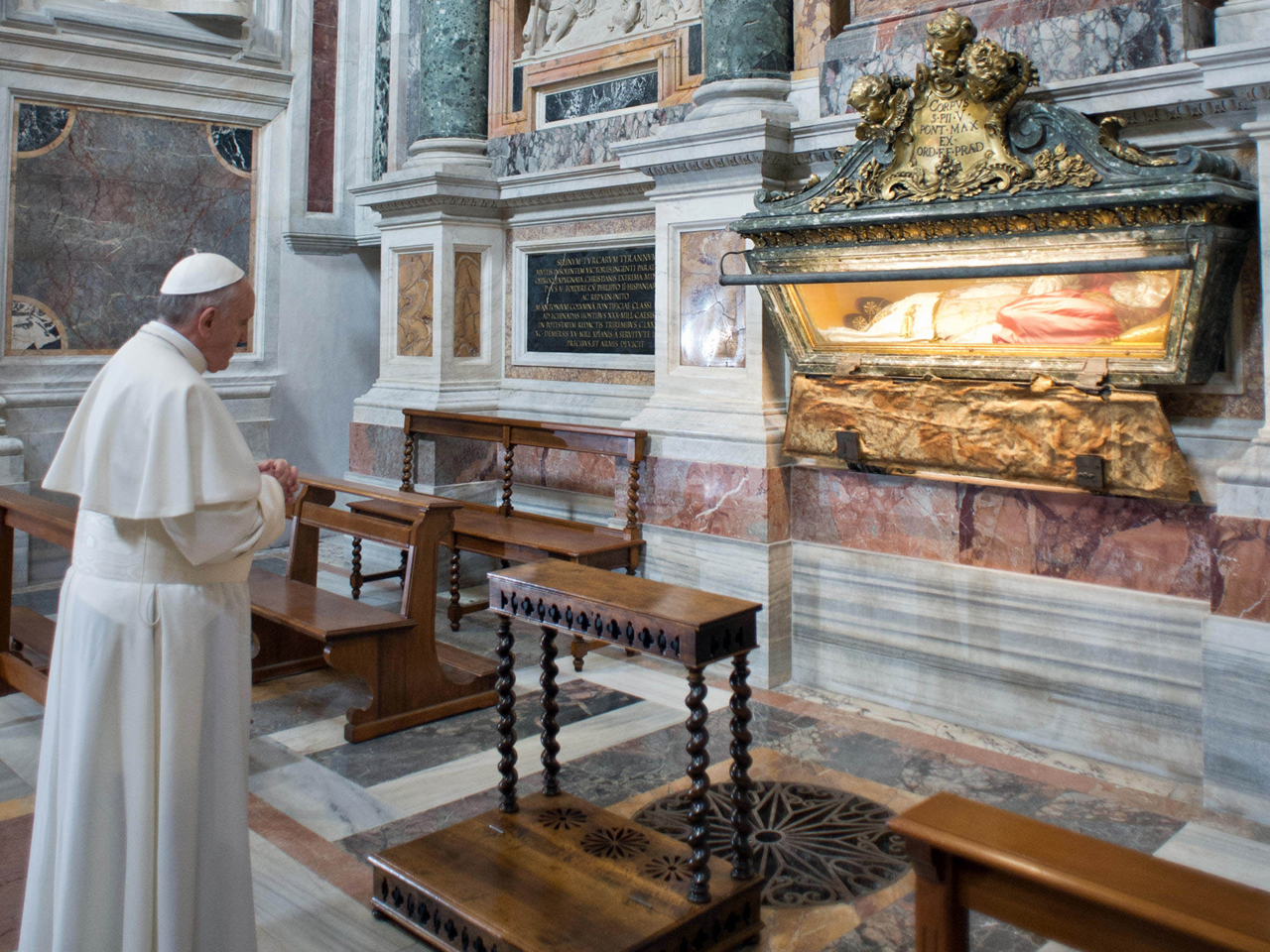 VATICAN CITY Pope Francis put his humility on display during his first day as pontiff Thursday, stopping by his hotel to pick up his luggage and pay the bill himself in a decidedly different style of papacy than his tradition-minded predecessor who tended to stay ensconced in the frescoed halls of the Vatican.

The break from Benedict XVI's pontificate was evident even in Francis' wardrobe choices: He kept the simple iron pectoral cross of his days as bishop and eschewed the red cape that Benedict wore when he was presented to the world for the first time in 2005 - choosing instead the simple white cassock of the papacy.

And in his first Mass as pope, Francis showed how different he would be as a pastor, giving an off-the-cuff homily about the need to walk with God, build up his church and confess - at one point referring to children building sand castles on the beach.

It was a far simpler message than the dense, three-page discourse Benedict delivered in Latin during his first Mass as pope in 2005.

The difference in style was a sign of Francis' belief that the Catholic Church needs to be at one with the people it serves and not impose its message on a society that often doesn't want to hear it, Francis' authorized biographer, Sergio Rubin, said in an interview Thursday with The Associated Press.

"It seems to me for now what is certain is it's a great change of style, which for us isn't a small thing," Rubin said, recalling how the former Cardinal Jorge Bergoglio would celebrate Masses with homeless people and prostitutes in Buenos Aires.

"He believes the church has to go to the streets," he said, "to express this closeness of the church and this accompaniment with those who are suffering."

Francis spoke by phone with Benedict on Wednesday, soon after he was elected. The visit to Castel Gandolfo will be significant because Benedict's resignation has raised concerns about potential power conflicts emerging from the peculiar situation of having a reigning pope and a retired one.

Francis began his first day as pope making an early morning visit in a simple Vatican car to a Roman basilica dedicated to the Virgin Mary and prayed before an icon of the Madonna.

The former archbishop of Buenos Aires, Cardinal Jorge Bergoglio, entered the St. Mary Major basilica through a side entrance just after 8 a.m. (0700 GMT) and left about 30 minutes later. He had told a crowd of some 100,000 people packed in rain-soaked St. Peter's Square just after his election that he intended to pray Friday to the Madonna "that she may watch over all of Rome."

The Vatican said Thursday that Francis would visit his predecessor, the now-Pope Emeritus Benedict XVI, at the papal summer retreat in Castel Gandolfo, south of Rome, in the coming days, but "not tomorrow or the next day."

Francis was expected to give a private Mass with his cardinals in the Sistine Chapel at 5 p.m., Rome time, on Thursday (12 p.m. eastern). On Friday morning, he is to welcome and address the cardinals in the Vatican's Clementine Hall.

The new pope's official inauguration as Bishop of Rome will take place in St. Peter's Square on Saturday.

One of the largest questions looming on the minds of Vatican watchers on Thursday morning, is who Francis will pick as his Secretary of State -- the number two position at the Vatican. The position was held under Benedict by the powerful Italian Cardinal Tarcisio Bertone. Bertone was considered a staunch traditionalist member of the Curia; a defender of the Church's secretive Rome-based bureaucracy and a man who impeded reform.

Francis' own background is not that of a Vatican insider, but rather a member of the Jesuit order -- a fiercely independent branch of the Church devoted to running teaching institutions and social programs, reports CBS News correspondent Mark Phillips. Yet, until now, Pope Francis' conservative views on birth control, homosexuality and women's role in the Church have not made him popular with his relatively progressive Jesuit brothers. He's no great friend to the Curia, says Phillips.

Wednesday evening, at 7:06 p.m. in Rome, white smoke billowed from the chimney atop the Sistine Chapel -- the first indication that 114 cardinals had elected Francis to lead the 1.2 million-strong church in an unusually quick conclave.

Francis, the first Jesuit pope, first pope from the Americas, and first non-European since the Middle Ages, decided to call himself Francis after St. Francis of Assisi, the humble friar who dedicated his life to helping the poor.

The new pope immediately charmed the crowd in St. Peter's that roared when his name was announced.

Waving shyly, he told said the cardinals' job was to find a bishop of Rome. "It seems as if my brother cardinals went to find him from the end of the earth, but here we are. Thank you for the welcome."

The 76-year-old Bergoglio, said to have finished second when Pope Benedict XVI was elected in 2005, was chosen on just the fifth ballot to replace the first pontiff to resign in 600 years. In the past century, only Benedict, John Paul I in 1978 and Pius XII in 1939 were elected faster.

Benedict's longtime aide, Monsignor Georg Gaenswein, accompanied Francis on the visit at St. Mary Major, the ANSA news agency reported. In addition to being Benedict's secretary, Gaenswein is also the prefect of the papal household and will be arranging the new pope's schedule.

Also praying with the new pope on Thursday was the archpriest emeritus of the basilica, Cardinal Bernard Law. The ex-Archbishop of Boston was forced to resign that position in 2002 after leaked internal Church documents showed he had tried to shield pedophile priests in his diocese from outside persecution. Law moved to Rome after his resignation and was made archpriest of the St. Mary Major basilica in 2004 by Pope John Paul II, a position he held until 2011.

Francis' election elated Latin Americans, who number 40 percent of the world's Catholics but have long been underrepresented in the church leadership. On Wednesday, drivers honked their horns in the streets of Buenos Aires and television announcers screamed with elation at the news.

"It's a huge gift for all of Latin America. We waited 20 centuries. It was worth the wait," said Jose Antonio Cruz, a Franciscan friar at the St. Francis of Assisi church in the colonial Old San Juan district in Puerto Rico. "Everyone from Canada down to Patagonia is going to feel blessed."

The new pontiff brings a common touch. The son of middle-class Italian immigrants, he denied himself the luxuries that previous cardinals in Buenos Aires enjoyed. He lived in a simple apartment, often rode the bus to work, cooked his own meals and regularly visited slums that ring Argentina's capital.

He considers social outreach, rather than doctrinal battles, to be the essential business of the church.

"As a champion of the poor and the most vulnerable among us, he carries forth the message of love and compassion that has inspired the world for more than 2,000 years that in each other, we see the face of God," President Barack Obama said in a statement.

As the 266th pope, Francis inherits a Catholic church in turmoil, beset by the clerical sex abuse scandal, internal divisions and dwindling numbers in parts of the world where Christianity had been strong for centuries.

While Latin America still boasts the largest bloc of Catholics on a single continent, it has faced competition from aggressive evangelical churches that have chipped away at strongholds like Brazil, where the number of Catholics has dropped from 74 percent of the population in 2000 to 65 percent today.

Francis is sure to bring the church closer to the poverty-wracked region, while also introducing the world to a very different type of pope, whose first words were a simple, "Brothers and sisters, good evening."

He asked for prayers for himself, and for Benedict, whose stunning resignation paved the way for his election.

"I want you to bless me," Francis said in his first appearance from the balcony of St. Peter's Basilica, asking the faithful to bow their heads in silent prayer.