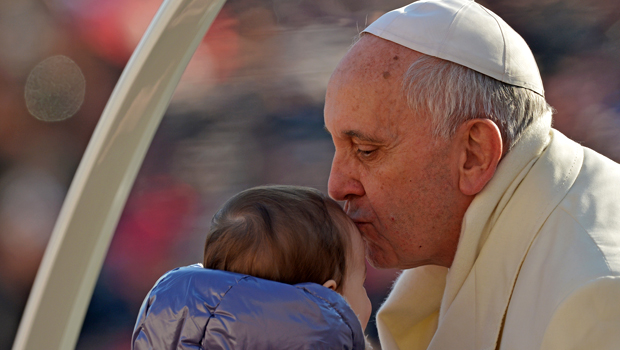 NEW YORK -- Time magazine selected Pope Francis as its Person of the Year on Wednesday, saying the Catholic Church's new leader has changed the perception of the 2,000-year-old institution in an extraordinary way in a short time.

The pope beat out NSA leaker Edward Snowden for the distinction, which the newsmagazine has been giving each year since 1927.

The former Argentine Cardinal Jorge Mario Bergoglio was elected in March as the first pope from Latin America and the first Jesuit. Since taking over at the Vatican, he has urged the Catholic Church not to be obsessed with "small-minded rules" and to emphasize compassion over condemnation in dealing with touchy topics like abortion, gays and contraception.

He has denounced the world's "idolatry of money" and the "global scandal" that nearly 1 billion people today go hungry, and has charmed the masses with his simple style and wry sense of humor. His appearances draw tens of thousands of people at a clip and his Pontifex Twitter account recently topped 10 million followers.

"He really stood out to us as someone who has changed the tone and the perception and the focus of one of the world's largest institutions in an extraordinary way," said Nancy Gibbs, the magazine's managing editor.

The Vatican said the honor wasn't surprising given the resonance in the general public that Francis has had, but it nevertheless said the choice was a "positive" recognition of spiritual values in the international media.

"The Holy Father is not looking to become famous or to receive honors," said the Vatican spokesman, the Rev. Federico Lombardi. "But if the choice of Person of Year helps spread the message of the Gospel - a message of God's love for everyone - he will certainly be happy about that."

It was the third time a Catholic pope had been Time's selection. John Paul II was selected in 1994 and John XXIII was chosen in 1962.

Time editors made the selection. The magazine polled readers for their choice, and the winner was Egyptian General Abdel-Fattah el-Sissi, who didn't even make the top 10 of Time's final list.

Millions everywhere, Catholics and non-Catholics alike, are talking about what Francis is doing and saying since he ascended to lead the world's largest religious institution, and he has given the world plenty of reason to pay attention recently.

On Dec. 2, the pope departed from his scripted remarks to a group of bishops in the Netherlands to talk about sexual abuse.

The pope said: "I wish to express my compassion and to ensure my closeness in prayer to every victim of sexual abuse, and to their families. I ask you to continue to support them along the painful path of healing, that they have undertaken with courage."

Those remarks came just days after he revealed to parishioners in a church near Rome that he had a job as a bouncer during his youth in Argentina, joking that now his job is to bring people into the fold, not kick them out.

To that end, Francis has taken a rather populist tone, and, if the rumors are to be believed, he has acted on it too.

He has talked often about the church's obligation in helping the poor and has beefed up the post of "Almoner of His Holiness" – a centuries-old position that involves distributing money from the Holy See to the poor and marginalized.

Last month, an 85-page document published by the Vatican called an Apostolic Exhortation - essentially Francis' mission statement - outlined where he wants the Catholic Church to go and what kind of church he wants it to be.

In the words of the document, Francis wants to see "a church that is bruised, hurting and dirty because it has been out on the streets."

Concern for the poor and a shunning of life's luxuries have been benchmarks of Francis' papacy from day one. His exhortation castigated what he called "the new idolatry of money," and described the gap between rich and poor as being the result of "ideologies which defend the autonomy of the marketplace and financial speculation."

"I beg the Lord," Francis wrote, "to grant us more politicians who are genuinely disturbed by the state of society, the people, the lives of the poor."

Officially called "Evangeli Gaudium" or "The Joy of the Gospel," the instructions, philosophy and admonitions are wrapped in what Father Mike Russo of St. Mary's College in San Francisco called the new pope's "great emotional intelligence."

"Be a church of joy. Don't go to events as if you're going to a funeral. You have to exemplify the very joy of the Gospel. I think he's extraordinarily good at that. He has that kind of emotional intelligence that leaders around the world want," said Russo.

For the church, the pope is as close to an absolute ruler as it's possible to be, but Francis said he was "open to suggestions" about how to change the nature of the papacy.

Included in that is the debate over women taking a greater role in the church, but that won't be as radical as the other changes the exhortation called for. The issue of female priests, the pope said in the document, "is not a question open to discussion."

Nonetheless, Francis has made it clear that major changes are on the way and they're going to be at every level and in the style he sets for the Catholic Church with every word he utters, or writes.