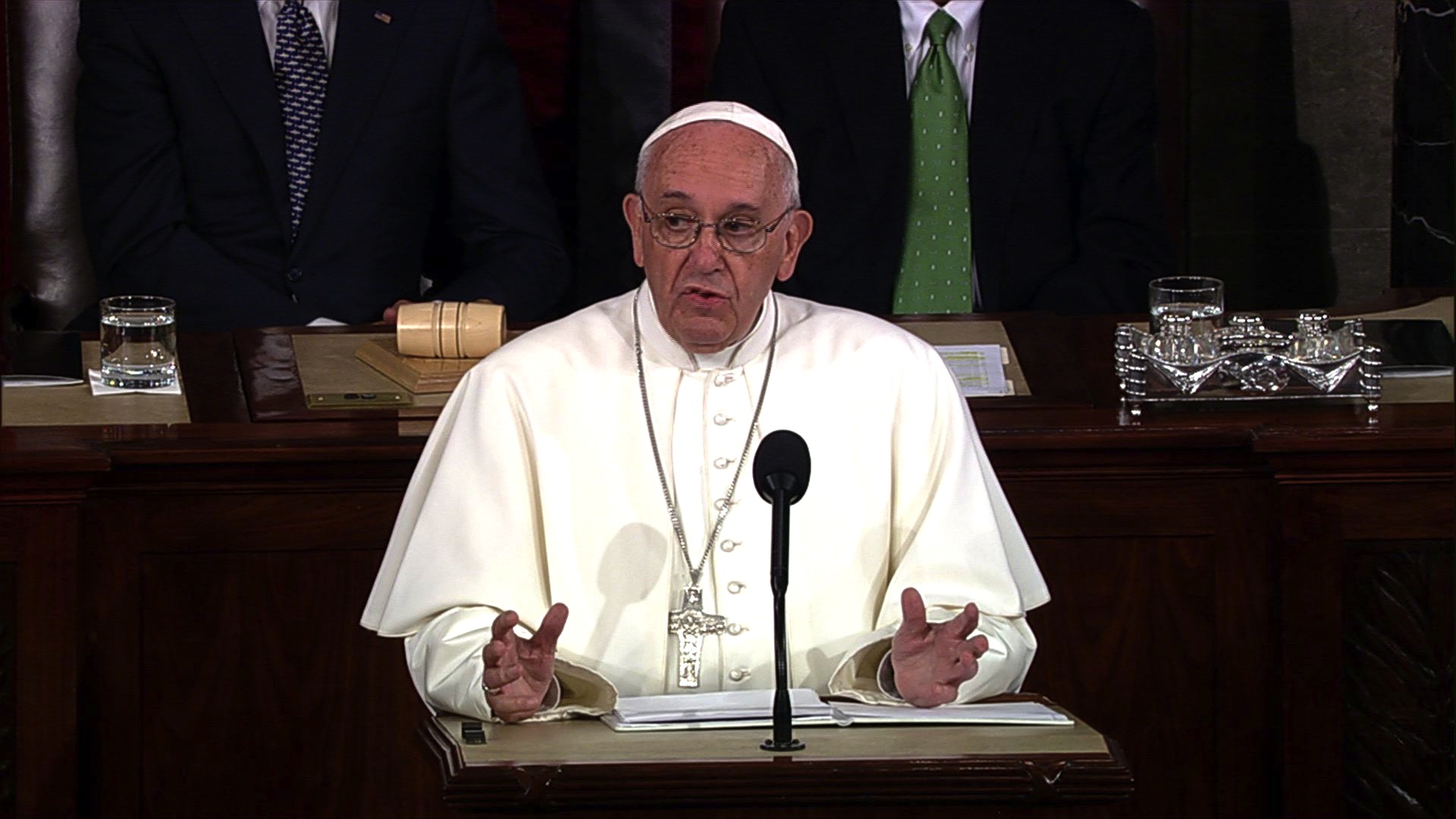 In the first address by the head of the Catholic Church to a joint meeting of Congress, Pope Francis called on lawmakers Thursday to address a long list of challenges ranging from climate change to Syrian migrant crisis and the decline of the American family.

"Your own responsibility as members of Congress is to enable this country, by your legislative activity, to grow as a nation. You are the face of its people, their representatives. You are called to defend and preserve the dignity of your fellow citizens in the tireless and demanding pursuit of the common good, for this is the chief aim of all politics," the pope said. He likened their work to that of Moses, the Old Testament figure that led the Jewish people out of slavery in Egypt.

He addressed members of Congress on his third and final day of Washington, D.C. Later this afternoon Pope Francis will travel to New York City, and then Philadelphia for the final leg of his trip to the United States.

One of the first topics he addressed was the rise in religious fundamentalism around the world, a topic he said demands special attention.

"A delicate balance is required to combat violence perpetrated in the name of a religion, an ideology or an economic system, while also safeguarding religious freedom, intellectual freedom and individual freedoms. But there is another temptation which we must especially guard against: the simplistic reductionism which sees only good or evil; or, if you will, the righteous and sinners," the pope said. "To imitate the hatred and violence of tyrants and murderers is the best way to take their place. That is something which you, as a people, reject. Our response must instead be one of hope and healing, of peace and justice."

In particular, he argued, this means addressing the "effects of unjust structures and actions" even in the developed world.

Though he is a native Spanish speaker, the pope is delivering the entire address in slow but deliberate English.

Pope Francis considered the links between immigration and the Syrian migrant crisis in his address. Drawing a link between his home country of Argentina and the United States, the pope said, "We the people of this continent, are not fearful of foreigners, because most of us were once foreigners." The line drew a standing ovation from many in the House chamber.

As he referenced the first people in North and South America whose rights "were not always respected," Francis called on people to "not repeat the sins and the errors of the past."

"We must resolve now to live as nobly and as justly as possible, as we educate new generations not to turn their back on our "neighbors" and everything around us," he said.

On the Syrian refugees in particular, he said, "We must not be taken aback by their numbers, but rather view them as persons, seeing their faces and listening to their stories, trying to respond as best we can to their situation."

Immigration and refugees were not the only politically charged issues the pope addressed. He also quoted liberally from his recent encyclical that called for action on climate change, specifically saying that Congress and the United States have a role to play in implementing "a culture of care" and "an integrated approach to combating poverty, restoring dignity to the excluded, and at the same time protecting nature."

"I am convinced that we can make a difference and I have no doubt that the United States - and this Congress - have an important role to play," he said.

He tied this to his message about the importance of the fight against poverty.

"The fight against poverty and hunger must be fought constantly and on many fronts, especially in its causes. I know that many Americans today, as in the past, are working to deal with this problem," he said. "It goes without saying that part of this great effort is the creation and distribution of wealth. The right use of natural resources, the proper application of technology and the harnessing of the spirit of enterprise are essential elements of an economy which seeks to be modern, inclusive and sustainable."

Francis did not specifically mention abortion policy, though he spoke of the need to "defend human life at every stage of its development." That led to an appeal to end the death penalty all over the world.

"I am convinced that this way is the best, since every life is sacred, every human person is endowed with an inalienable dignity, and society can only benefit from the rehabilitation of those convicted of crimes," he said.

Other parts of his speech may resonate more with Republicans in his audience. He spent several minutes considering the decline of the family, which, he said, "is threatened, perhaps as never before, from within and without."

"Fundamental relationships are being called into question, as is the very basis of marriage and the family. I can only reiterate the importance and, above all, the richness and the beauty of family life," he said.

He also entreated society to address the "hopeless maze of violence, abuse and despair" that entrap many young people.

"At the risk of oversimplifying, we might say that we live in a culture which pressures young people not to start a family, because they lack possibilities for the future. Yet this same culture presents others with so many options that they too are dissuaded from starting a family," he will say.

Throughout the speech he also lauded the values of four Americans in particular: former President Abraham Lincoln (liberty), Martin Luther King (Liberty in plurality and non-exclusion), Catholic Worker Movement Founder Dorothy Day (social justice and the rights of persons) and Cistercian monk Thomas Merton (the capacity for dialogue and openness to God).

Pope Francis shied away from a direct discussion of one issue where he hopes to see Congress take action: Restoring diplomatic ties with Cuba.

It got only an indirect reference in his speech, as he said, "I would like to recognize the efforts made in recent months to help overcome historic differences linked to painful episodes of the past."

"When countries which have been at odds resume the path of dialogue - a dialogue which may have been interrupted for the most legitimate of reasons - new opportunities open up for all. This has required, and requires, courage and daring, which is not the same as irresponsibility. A good political leader is one who, with the interests of all in mind, seizes the moment in a spirit of openness and pragmatism. A good political leader always opts to initiate processes rather than possessing spaces," he added.

Congress will play a key role in ending the trade embargo with Cuba, something several lawmakers have pledged to block. The Vatican said Wednesday it was one of the issues discussed by the diplomatic delegations on the sidelines of a meeting between President Obama and the Pope.

Tens of thousands of people assembled on the West Front of the Capitol, where at least five jumbotrons are set up with speakers to play the address to the crowd. Many people waited for hours before the sun came up to secure a seat.