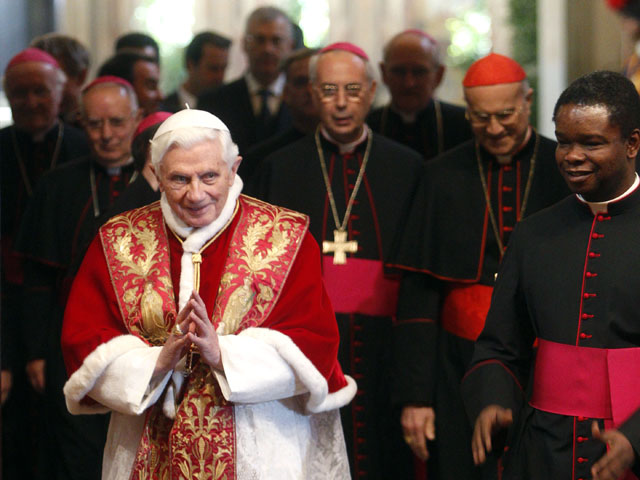 The pontiff noted that the crisis has spread from the developed world, where it started, to developing countries, where it is having a "profound impact" on life.

"We must not lose heart, but instead resolutely rediscover our way through new forms of commitment," Benedict said. "The crisis can and must be an incentive to reflect on human existence and on the importance of its ethical dimension."

Solutions should do more than stem financial losses, and also aim to ensure "all can lead a dignified life," Benedict said, speaking to an annual gathering of the diplomats representing their countries at the Holy See. The Vatican has diplomatic relations with 179 nations.

Benedict said economic disparity had provoked last year's protests seeking reform that have swept North Africa and Middle East, noting that it was difficult at the moment "to understand fully the consequences for the stability of the region."

"Initial optimism has yielded to an acknowledgment of the difficulties of this moment of transition and change," the pontiff said, calling for an end to violence and for putting respect for individuals at the center of institutions and laws.

The pope also expressed concern for people in countries where violence continues. He said he was praying for a rapid end to bloodshed in Syria and a speedy start of political dialogue "encouraged by the presence of independent observers."

The pope also recalled the "numerous victims" of religiously motivated terrorism, especially in Asia and Africa. He cited the assassination last spring of Pakistan's sole Christian government minister and a Christmas Day explosion in a Catholic church during Mass near Nigeria's capital, killing at least 15.

Taking up a theme he espoused last fall at a communal peace meeting in Assisi, Benedict emphasized that such violence was the antithesis of religion. "Religion cannot be employed as a pretext for setting aside the rules of justice and of law for the sake of the intended 'good,' " Benedict said.