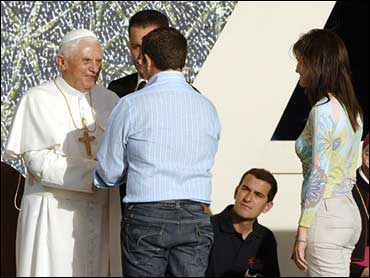 Pope Benedict XVI urged hundreds of thousands of young Catholics on Sunday to take better care of the planet and reverse environmental degradation, saying the world's water supply in particular needs to be preserved and shared to avoid conflicts.

Benedict offered a very eco-friendly message during an open-air Mass on the second day of a weekend religious youth rally in the pilgrimage town of Loreto that was organized by the Italian bishops' conference.

The Italian Church has designated Sept. 1 as "Save Creation Day," and as a result the Loreto meeting carried a strong environmental message, with each of the participants given biodegradable plates, recycling bags for their trash and a hand-cranked cell-phone recharger.

Benedict told the crowd, camped out under umbrellas and tents on a vast, dusty field on the Adriatic coast, that it was up to them to urgently save the planet from development that had often ignored "nature's delicate equilibrium."

"Before it's too late, we need to make courageous choices that will recreate a strong alliance between man and Earth," Benedict said in his homily. "We need a decisive 'yes' to care for creation and a strong commitment to reverse those trends that risk making the situation of decay irreversible."

He said water, in particular, was a "precious" resource that needed to be preserved since "it unfortunately becomes a source of strong tensions and conflicts if it isn't shared in an equitable and peaceful manner."

Benedict has been on something of a green campaign of late, lamenting just this past week the environmental impact of recent forest fires in Italy and Greece. During his recent summer vacation in the mountains, he spoke frequently about the importance of nature - God's creation - in rekindling spirituality.

Under Benedict, the Vatican has been taking some concrete steps toward greater environmental sustainability. It has joined a reforestation project aimed at offsetting its CO2 emissions, and has also said it was installing photovoltaic cells on the roof of its main auditorium to convert sunlight into electricity.

An estimated 500,000 people turned out for Benedict's Mass, the ANSA news agency said, citing police. Most of them spent the night camped out on tarps and tents on the field down the hill from Loreto, Italy's most important shrine dedicated to the Virgin Mary.

As dawn rose over them Sunday, the field appeared to be a great multicolored mosaic, with participants donning the brightly colored sun hats provided by organizers to shade them from the blistering sun.

The meeting was an Italian warm-up for next year's World Youth Day, in Sydney, Australia, which the 80-year-old pope plans to attend.