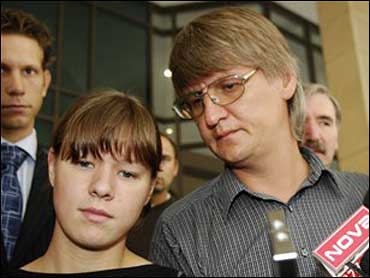 There's a lot of tension in the pool at the world swimming championships being held in Melbourne.

American Michael Phelps set his third world record in as many days, winning the 200-meter individual medley at the world championships Thursday. "Michael is just out of reach," bronze medalist Laszlo Cseh of Hungary said.

But when that tension spills over the edge to poolside, it makes a splash, reports CBS News correspondent Mark Phillips. Unfortunately, when push came to shove between a Ukrainian coach and his swimmer, the cameras were rolling.

What's worse, the coach, Mikhaylo Zubkov, 38, is the 18-year-old swimmer's father. He was an Olympic swimmer in his prime and Kateryna Zubkova had failed to qualify in two events. But that apparently wasn't the problem. A boy he didn't want her to see was the problem.

Local police saw the ugly altercation as a domestic violence issue and intervened.

The matter went to court, where the coach/father and the swimmer/daughter arrived separately, Phillips said on CBS News' The Early Show. But when Kateryna refused to testify, the matter was dropped.

"I need him, my father and my coach. I need him by side," Zubkova said.

The two emerged hand in hand. Mikhaylo, according to his lawyers, promised to behave himself.

"He is a good coach, he is a good father," another attorney, Florin Andrighetto, told Melbourne Magistrates' Court.

It was not part of a "bizarre training method" to spur his daughter on, said Andrighetto.

"This was a father and daughter incident," said attorney Paul Horvath. "It was a personal matter. It was something that was ventilated and I think everyone can form their own conclusions that there's a time and a place for certain things."

And that was neither the time nor the place.

The coaching career of Zubkov, the father, is now under investigation by world swimming governing body FINA. He had already been stripped of his world championships accreditation.

Kubkova, the daughter, has her 200-meter backstroke heats Friday, where it might be tough getting her mind back in the pool.