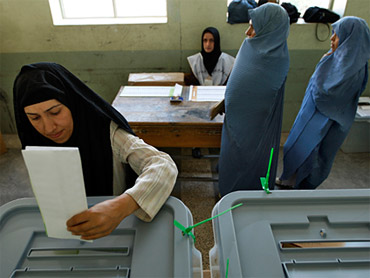 (AP Photo/Saurabh Das)
As the people of Afghanistan head to the polls today, Americans remain pessimistic about how things are going for the U.S. in that country.

According to a recent CBS News/New York Times Poll (July 24-28, 2009), only a third of Americans think the war in Afghanistan is going well for the U.S. Most – 57 percent - say the war is going badly. Six U.S. troops were killed in Afghanistan on Wednesday and last month was the deadliest for U.S. forces in Afghanistan since the war began.

Assessments of the war in Afghanistan are markedly more negative now than at the early stages of the conflict. In October 2001, when the war began, 83 percent of Americans said things were going well for the U.S. there, reaching a high of 93 percent in December of that year.

It was a different story seven years later. Only 27 percent said U.S. efforts in Afghanistan were going well in December 2008 –- an all-time low. Since the start of this year, the percentage who says the war is going well has hovered in the 30s.

Majorities of both Republicans (56 percent) and Democrats (58 percent) think the war in Afghanistan is going badly for the United States.

HOW ARE THINGS GOING FOR THE U.S.IN AFGHANISTAN?

In addition, the latest ABC News/Washington Post poll finds that the public is somewhat divided as to whether the war in Afghanistan is worth fighting: 47 percent say it is, but 51 percent think it isn't. Seventy percent of Republicans see the war as worth fighting, compared to just 27 percent of Democrats.

IS THE WAR IN AFGHANISTAN WORTH FIGHTING?
(ABC News/Washington Post Poll)

Despite these negative evaluations of the war, most do not think the U.S. made a mistake in initially sending troops to Afghanistan. According to a July Gallup Poll just 36 percent say going into Afghanistan was a mistake, while a significant majority (61 percent) say it was not.

President Obama, who sent an additional 20,000 troops into Afghanistan earlier this year, gets good marks on his handling of the war there – 56 percent approve in a recent Gallup Poll.

The president spoke recently of U.S. military efforts in Afghanistan at the Veterans of Foreign War convention saying "our troops are helping to secure polling places for this week's election so that Afghans can choose the future that they want."

Still, according to the latest ABC News/Washington Poll, 64 percent of Americans are not confident that the elections in Afghanistan will produce a government that can rule effectively; only 34 percent say they are confident.

Marines Walk Tightrope of Death
Mission Critical for U.S. Troops in Afghanistan
What the Afghans Really Want
Reporter's Notebook: With the Marines in Helmand Province

Jennifer De Pinto is manager of election and survey information for CBS News. Poll Positions is weekly Hotsheet feature on polling trends from the CBS News Survey and Polling Unit. Click here for more posts from the series.
View CBS News In