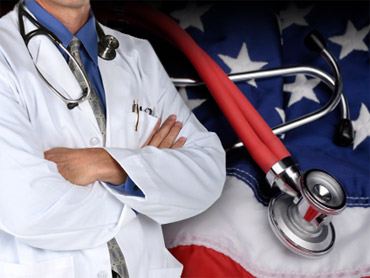 President Barack Obama's health care overhaul has divided the nation, and Republicans believe their call for repeal will help them win elections in November. But the picture's not that clear-cut.

A new AP poll finds that Americans who think the law should have done more outnumber those who think the government should stay out of health care by 2-to-1.

"I was disappointed that it didn't provide universal coverage," said Bronwyn Bleakley, 35, a biology professor from Easton, Mass.

More than 30 million people would gain coverage in 2019 when the law is fully phased in, but another 20 million or so would remain uninsured. Bleakley, who was uninsured early in her career, views the overhaul as a work in progress.

The poll found that about four in 10 adults think the new law did not go far enough to change the health care system, regardless of whether they support the law, oppose it or remain neutral. On the other side, about one in five say they oppose the law because they think the federal government should not be involved in health care at all.

The AP poll was conducted by Stanford University with the Robert Wood Johnson Foundation. Overall, 30 percent favored the legislation, while 40 percent opposed it, and another 30 percent remained neutral.

Those numbers are no endorsement for President Obama's plan, but the survey also found a deep-seated desire for change that could pose a problem for Republicans. Only 25 percent in the poll said minimal tinkering would suffice for the health care system.

Brian Braley, 49, a tech industry worker from Mesa, Ariz., wants Washington to keep its hands off. "I think it's a Trojan horse," Braley said of the health care law. "It's a communist, socialist scheme. All the other countries that have tried this, they're billions in debt, and they admit this doesn't work."

It may well satisfy people who share Braley's outlook if Republicans succeed in tearing out what they dismiss as "Obamacare" by the roots. But GOP leaders would still find themselves in a quandary.

Republicans "are going to have to contend with the 75 percent who want substantial changes in the system," said Stanford political science professor Jon Krosnick, who directed the university's participation.

"Republican legislators' passion to repeal the legislation is understandable if they are paying attention to members of their own party," Krosnick added. "But if they want to be responsive to all Americans, there are more Democrats and independents than there are Republicans."

The poll did find some agreement among people who think the law should do more and those who think government should get out.

Broad majorities of both the "get-outs" and "do-mores" said medical care, health insurance and prescription drugs cost too much. And most said the system should aim to increase the number of people with insurance and enable Americans to get the care they need, while improving quality.

The differences emerge when it comes to the means:

• Only 25 percent of the "get-outs" favor requiring health insurance companies to sell coverage to people regardless of pre-existing medical conditions, while 54 percent of the "do-mores" support it. The law requires insurers to cover children regardless of health problems starting this year, and that protection is extended to people of all ages in 2014.

• Among those who want a law that does more, 68 percent favor requiring medium to large companies to provide insurance to their workers or pay a fine; that stands at 28 percent among those who want the government out. The law does not require employers to offer coverage, but it hits companies that have 50 or more workers with a penalty if any full-time employee gets a government subsidy for health insurance.

• The "get-outs" overwhelmingly reject the health care law's requirement that most Americans carry health insurance starting in 2014. But the "do-mores" are split, with 34 percent favoring the mandate, 33 percent opposing it, and 32 percent neutral.

Tom Gergel, 45, of West Chester, Pa., said he supports the health care law because it moves toward coverage for all and does away with denial of coverage to people in poor health. But he doesn't think it's perfect.

"Is this program going to make it more expensive?" asked Gergel, who sells computer software for engineers. "The jury's still out versus where we are now. We have the best health care in the world for those who can afford to pay for it, but it doesn't work for everyone."

The survey was conducted Aug. 31 to Sept. 7, and involved interviews with 1,251 randomly chosen adults nationwide. It has a margin of sampling error of plus or minus 3.9 percentage points.

The survey was conducted by Knowledge Networks, which first chose people for the study using randomly generated telephone numbers and home addresses. Once people were selected to participate, they were interviewed online. Participants without Internet access were provided it for free.

Stanford University's participation in the project was made possible by a grant from the Robert Wood Johnson Foundation.
By Associated Press Writers Ricardo Alonso-Zaldivar and Jennifer Agiesta; AP's Natasha Metzler and Dennis Junius contributed to this report