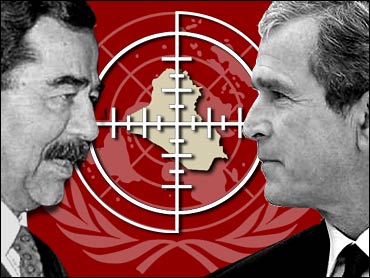 According to a CBS News/New York Times poll, Americans support the idea of using military force to remove Saddam Hussein. But they overwhelmingly want diplomatic efforts and the inspections to run their course first -- they would want to see clear evidence against Iraq before going to war.

If the inspectors haven't found any weapons by next Tuesday -- a deadline for U.N. weapons inspectors to report their findings -- Americans say give them more time. Most Americans think those weapons are there to be found, though many doubt inspectors will find them.

The poll found 63% of Americans want President Bush to find a diplomatic solution.

It also found support for military action -- if it becomes necessary -- is still high, but it has slipped from just two months ago -- 64% now compared to 70% last November.

What's more, Americans seem to want hard evidence that Iraq is cheating. More than two-thirds (77% to 17%) say if inspectors haven't found a smoking gun, they should keep looking.

For the moment, diplomacy is the clearly favored course with regard to Iraq, a feeling that hasn't changed from two weeks ago.

WHAT SHOULD THE U.S. DO NOW WITH IRAQ?

When the U.N. weapons inspectors present their report on January 27th, if they say they have not found any weapons of mass destruction, Americans strongly believe they should take more time to look. And even when this question is framed to put the burden of proof on Iraq - asking what the U.S. should do if Iraq cannot show proof that its weapons program has been shut down - Americans are equivocal about military action: half support a strike and half say the U.N. should still take more time.

WHAT TO DO IF INSPECTORS' REPORT SAYS…

Found no weapons of mass destruction so far

Iraq can't prove it's shut down its program

Americans overwhelmingly believe Hussein does have weapons of mass destruction: 85% say so, even though the inspectors haven't uncovered those weapons yet. Of those who think Iraq has weapons stashed somewhere, about half are pessimistic that they'll ever turn up.

DOES IRAQ HAVE WEAPONS OF MASS DESTRUCTION?

Yes, and U.N. will eventually find them:

Either way, war seems inevitable to most Americans, a feeling that has not changed since the fall. 72% say the U.S. will end up fighting Iraq. In November 2002, 69% believed this, and in September 74% did.

General support for military action -- when and if it comes -- is still strong, but it has dipped of late, and the number who disapprove is the highest it has been in a year, jumping up to one-third of Americans.

Support For War Among Age Groups

The U.S. Image Abroad And The Bush Administration

Americans are increasingly concerned that their country is losing respect around the world. A majority, 55%, believes that the U.S. is now less respected in the world than it was two years ago and only 12% say the U.S. has gained respect of late. Just three months ago, 19% said the U.S. was more respected.

U.S. GAINING OR LOSING RESPECT IN THE WORLD?
Compared to two years ago…

U.S. RELATIONS WITH EUROPEAN ALLIES
Compared to two years ago…

And Americans are leery of the possible consequences of a U.S. strike on the odds of another terrorist attack. 62% are fearful that war with Iraq will increase – not decrease – the threat of terrorism against the U.S.

IF U.S. TAKES MILITARY ACTION VS. IRAQ, THREAT OF TERROR WILL:

Just over one-third of Americans think the Bush Administration has tried hard enough to reach diplomatic solutions with Iraq, but 55% say it has been too quick to push for the use of military force. Americans see this tendency in the Administration's overall foreign policy, as well, with a majority thinking it is too quick to consider military actions.

The Bush Administration: Too Quick To Use The Military Vs. Iraq?

38%
Too quick to involve military:

IS BUSH'S FOREIGN POLICY MAKING THE U.S. SAFER FROM TERROR?

As new reports surfaced about how Osama bin Laden may have escaped U.S. capture last year, respondents were asked how much progress the Bush Administration had made in eliminating the threat of terrorists operating from Afghanistan and other countries. The vast majority of Americans believe it has made at least some progress, though only a few (15%) say it has made a lot.

The threat from Al Qaeda is still on the minds of many and is still seen to outweigh the threat from Iraq. Asked whether Iraq, North Korea or Al Qaeda represents the greater threat to peace and stability, 46% said Al Qaeda, more than double the 22% who said Iraq, while 16% pointed to North Korea.


This poll was conducted among a nationwide random sample of 997 adults, interviewed by telephone January 19-22, 2003. The error due to sampling for results based on the entire sample could be plus or minus three percentage points. Sampling error for subgroups may be higher.