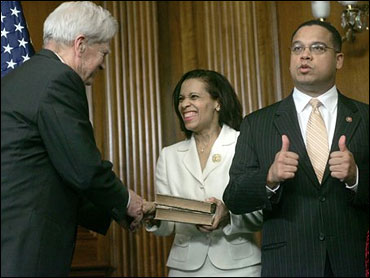 Muslims in America have a much more positive outlook on life than their counterparts in most predominantly Muslim countries and some other Western societies, according to a poll released Monday.

The Gallup Organization study found Muslim-Americans to be racially and ideologically diverse, extremely religious, and younger and more highly educated than the typical American.

Gallup asked respondents to evaluate their life situation by placing themselves on a ladder where the bottom step, zero, equals the worst possible life and 10 the best possible life. Gallup defined as "thriving" those who said they're currently on at least step seven of that ladder and expect to be on step eight or higher about five years from now.

Muslim-Americans (41 percent) were slightly less likely than Americans overall (46 percent) to be thriving. Yet the proportion of Muslims thriving in the United States was among the highest of Western societies surveyed, Gallup found. For example, only 8 percent of Muslims in the United Kingdom and 23 percent in France were thriving.

One exception: 49 percent of Muslims were deemed thriving in Germany, which welcomed many immigrants from Turkey during labor shortages in the 1960s and 1970s.

In predominantly Muslim countries, only in Saudi Arabia were more Muslims - 51 percent - thriving than in America.

Gallup found only 11 percent of Muslims thriving in Indonesia and Pakistan, 13 percent in Egypt, in the high teens to 20 percent in Bangladesh, Turkey, Lebanon and Jordan, and 24 percent in Morocco. Gallup found the proportion "suffering" - answering 0 to 4 on both ladder questions - ranging from 20 to 26 percent in Turkey, Egypt and Lebanon and as high as 33 percent in Jordan and 45 percent in Pakistan.

In short, Muslim Americans look more like other Americans in their life outlook than they resemble Muslims in most predominantly Muslim nations.

The Gallup study painted an uncommon portrait of Muslims in a U.S. and global context by combining interviews with 946 Muslims from polling of more than 300,000 Americans throughout 2008 and comparing them to Gallup surveys in more than 140 other countries. With Muslim-Americans probably making up only around 1 percent of the nation's population, few sound surveys have targeted the group, despite interest after the Sept. 11 terrorist attacks.

In an essay for the Gallup report, Rep. Keith Ellison, D-Minn. - the first Muslim elected to Congress - urged Muslim Americans to "step out of the shadows of your own world, and step forthrightly into a participatory America."

"For too long - and particularly after 9/11 - Muslims have withdrawn into their own mosque-defined communities, denying themselves their rightful place in the fabric of America," Ellison wrote. "'Being Muslim' shouldn't need to be explained, but rather be observed by how each of us lives our lives, and the values we espouse. However defined we are by our religion, we are equally defined by our nationalism; we are Americans."

Gallup Organization interviews with a random sample of 946 Muslim Americans in 2008 shed light on the demographics of this rarely studied group: