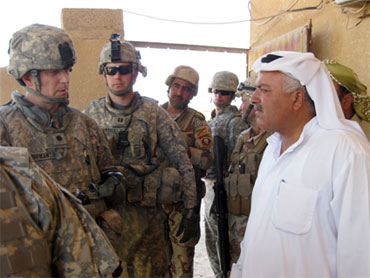 With combat operations in Iraq coming to an end, most Americans believe the war is going well for the United States, a new CBS News survey finds. But nearly six in ten say it was a mistake to start the battle in the first place, and most say their country did not accomplish its objectives in Iraq.

Thirty-five percent predict more violence in Iraq because of the troop withdrawal, while 60 percent say the violence will lessen or stay where it is now.

Fifty-two percent approve of how President Obama is handing the situation in Iraq.

The percentage of Americans who say America did the right thing in going to war in Iraq now stands at 37 percent. Fifty-nine percent say the war was a mistake, up from 55 percent in March of last year. While most Democrats and independents say the United States should not have gone to war, 63 percent of Republicans say it was the right thing to do.

Twenty-five percent overall say the war has made the United States safer from terrorism, a drop of 11 percentage points since March of 2008. Eighteen percent say it has made American less safe, while most - 55 percent - say it has made no difference.

Poll: Most Think Some Bush Tax Cuts Should Expire

This poll was conducted among a random sample of 1,082 adults nationwide, interviewed by telephone August 20-24, 2010. Phone numbers were dialed from random digit dial samples of both standard land-line and cell phones. The error due to sampling for results based on the entire sample could be plus or minus three percentage points. The error for subgroups is higher.