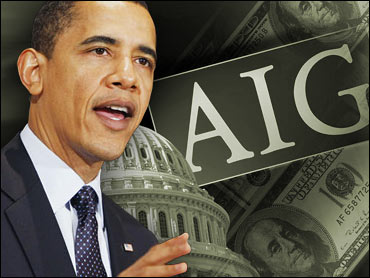 For the first time since he became president, a significant number of Americans are expressing disapproval of Barack Obama's actions in a specific area: His handling of the AIG bonus situation.

Forty-two percent of those surveyed disapprove of the president's handling of the AIG bonuses, while roughly the same percentage - 41 percent - approve. Another 17 percent don't know or aren't sure.

What Do You Want CBS News To Poll About? Let us know!

And ratings for the president's handling of the overall economy are actually up slightly: Sixty-one percent now approve, up from 56 percent last week.

Even so, 56 percent of Americans say the administration ought to have found some way to stop the bonuses from being paid out. Thirty-four percent said it should not have.

While Treasury Secretary Timothy Geithner has been much-criticized in Washington for his handling of the bonus situation, that criticism is not shared by most Americans. About half express confidence in Geithner's overall ability to deal with the nation's economic crisis, though only 13 percent have a lot of confidence in him right now. (Read more on Geithner's approval here.)

(CBS)
An overwhelming majority of Americans - 83 percent - say AIG could have found a way not to pay their employees bonuses. The company has argued that the bonuses were agreed to it ran into financial trouble, and that contracts legally required them to pay them.

As we reported Monday morning, more than three in four Americans think the government should try to recover the bonus money paid by AIG. Only 15 percent believe the company should get more government assistance to avoid bankruptcy. And just 23 accept the argument from some in the financial industry that the bonuses are necessary to hire and retain employees.

And despite reports that some AIG executives are returning their bonuses, most Americans - 69 percent - think few or no employees will actually give some of the bonus money back.

Asked if companies receiving federal bailout money should be awarding bonuses to their employees, 65 percent said such a move is unacceptable. Another 26 percent said it is acceptable to give bonuses only to mid- and lower level employees; just six percent think said bonuses should be given to whomever the company chooses.

Americans are split on a House bill to tax the bonuses at 90 percent, a measure passed in the wake of last week's populist outrage at the situation. Fifty-one percent approve of the legislation - which the Obama administration appears to be backing away from - while 44 percent disapprove.

Attention Paid To The Uproar:

(CBS)
Nearly half of Americans say President Obama is spending the right amount of time dealing with the bonuses, and the rest are split on whether he is paying too much attention (24 percent) or too little attention (21 percent) to the issue.

Meanwhile, a majority of Americans - 53 percent - think Congress is spending too little time trying to solve the nation's broader economic problems. And 40 percent believe the media is too focused on AIG and that they should be spending more time focused on other issues.

This poll was conducted among a random sample of 949 adults nationwide, interviewed by telephone March 20-22, 2009. Phone numbers were dialed from RDD samples of both standard land-lines and cell phones. The error due to sampling for results based on the entire sample could be plus or minus three percentage points. The error for subgroups is higher.