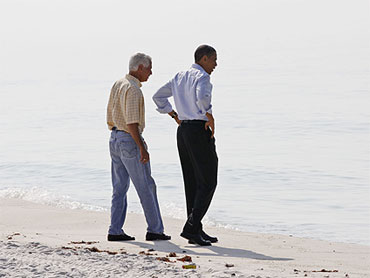 President Barack Obama is poised to seize the handling of oil spill damage claims from BP, his chief spokesman said Tuesday, as Mr. Obama sought to reassure people he's up to the enormous challenge of helping them recover from the environmental disaster.

The president will outline his specific plans and expectations in a prime-time Oval Office speech.

In the meantime, the president said, "People have every right to be angry" about the spill.

A revised estimate of the amount of oil leaking into the Gulf puts the number of barrels between 35,000 and 60,000 a day. It means that when that riser pipe was cut to try to contain that oil it increased the amount of oil coming out by about 50 percent.

Gulf Coast beaches like Pensacola's are still open for business, the president said -- but "the fishing waters are closed... tar balls have been coming ashore, and everybody's bracing for more."

The president emphasized the role of the military in the response, including the authorization of the deployment of 17,500 National Guardsmen.

The aim of wresting the claims-handling from BP, press secretary Robert Gibbs said, would be to make economically distressed individuals and businesses "whole." The claims processing problem is among several difficult issues that Mr. Obama planned to address directly in the talk to the nation.

From the White House, Gibbs was interviewed on several network morning news shows.

"This disaster has taken their ability to make a living away from them," he said. "We need to do this quickly, and we have to make sure that whatever money goes into that - that in no way caps what BP is responsible for. Whatever money they owe to anybody in the Gulf, they're going to have to pay regardless of the amount."

Meanwhile, BP said Tuesday it has approved 337 checks for a total amount of $16 million to businesses along the Gulf Coast that have been hurt by the oil spill and that have filed damage claims in excess of $5,000.

The president began his day with a walk along Pensacola Beach with Gov. Charlie Crist and Coast Guard Adm. Thad Allen. People were swimming in the emerald green water. But oil is nearby even if it can't be seen, according to Allen.

"That will happen," Gibbs said on CBS' "The Early Show". "The president will either legally compel them or come to an agreement with BP to get out of the claims process [and] give that to an independent entity, so that the people that have been damaged can get the money that they deserve quickly."

Mr. Obama's address to the nation sets the stage for his showdown White House meeting Wednesday with top BP executives. BP leased the rig that exploded April 20 and led to the leak of millions of gallons of coast-devastating crude. It's part of an effort by Obama, who's been accused of appearing somewhat detached as the oil spill disaster has unfolded, to convince a frightened Gulf Coast and a skeptical nation that he is in command.

Mr. Obama was to deliver the speech upon his return from a two-day swing through Mississippi, Alabama and Florida, his fourth trip to the Gulf since the Deepwater Horizon drilling rig explosion that set off the disaster, but his first outside the hardest-hit state of Louisiana.

The trip gave him ammunition for the speech and for his meeting with BP executives where he intends to finalize the details of a victims compensation fund. He visited vacant beaches in Mississippi where the threat of oil had scared off tourists, heard the stories of local employers losing business, watched hazmat-suited workers scrub down boom in a staging facility in Theodore, Ala., and took a ferry ride through Mobile Bay and then to Orange Beach, Ala., where oil has lapped on the shore.

"We're gathering up facts, stories right now so that we have an absolutely clear understanding about how we can best present to BP the need to make sure that individuals and businesses are dealt with in a fair manner and a prompt manner," the president said Monday.

"I am confident that we're going to be able to leave the Gulf Coast in better shape than it was before," he said.

That pledge was reminiscent of George W. Bush's promise to rebuild the region "even better and stronger" than before Hurricane Katrina in 2005. Bush could not make good on that promise, and Obama did not spell out how he would fulfill his. Tuesday's speech will give him the chance.

Presidents reserve the Oval Office for rare televised addresses. When they take their place behind the desk, it's a time for solemnity and straight talk - often a moment of history. There is a sense of gravity. One man by himself before one television camera speaking to the nation.

Oval Office addresses typically aren't lengthy discourses like a State of the Union, but if a president has to go for broke, this is where he does it. Bush addressed the nation from the Oval on the evening of Sept. 11, 2001. Ronald Reagan spoke there after the space shuttle Challenger explosion. John F. Kennedy grimly explained the Cuban missile crisis. Richard Nixon announced his resignation.

Mr. Obama hasn't used it yet. Not even during the worst economic crisis since the Great Depression. Not to explain painfully high unemployment rates. Or bank and auto company bailouts. Not to speak of terrorism threats. Even when his health insurance plan was in peril, he did not speak from the Oval Office to rally support or explain to Americans why he considered it vital.

Rep. Ed Markey, chairman of the House Energy and Commerce environment subcommittee, said the plans "cite identical response capabilities and tout identical ineffective equipment." The committee looked at plans of BP along with those of ExxonMobil, Chevron, ConocoPhillips and Shell Oil.

Markey said at a hearing that two plans list the phone number for the same dead expert, and three include references to protecting walruses - which do not live in the Gulf.

Markey said that while the companies present at the hearings have reaped nearly $300 billion in profits over the last three years, they each spend around $20 million annually on safety and spill response - less than one-tenth of 1 percent of profits. He said that the companies pay nothing for leases to drill on public land worth at least $50 billion.

"Time after time BP appears to have taken shortcuts that increased the risks of catastrophic blowout," Committee Chairman Henry Waxman said in his opening statement.

Investigators found that BP was badly behind schedule on the project and losing hundreds of thousands of dollars with each passing day, and responded by cutting corners in the well design, cementing and drilling efforts and the installation of key safety devices.

The House Energy and Commerce Committee released dozens of internal documents that outline several problems on the deep-sea rig in the days and weeks before the April 20 explosion that killed 11 workers and set in motion the catastrophe. The committee has been investigating.

Waxman also criticized the oil companies' "cookie cutter plans" and said that BP's competitors are as unprepared as BP was to respond to a spill. All five response plans were produced by the same third-party company, Waxman said, and contain much of the same text.

Each company's plan for cases in which a blowout preventer fails - the exact scenario that led to the current disaster - includes only a few vague sentences about assembling a team of technical experts.

Perhaps the most scathing opening statement came from Rep. Bart Stupak, D-Mich., who pointed out that ExxonMobil's plan includes a 40-page appendix on managing public relations in the wake of a disaster - far more material than it devotes to protecting wildlife.

• BP won permission to start burning oil and gas piped up from its broken seafloor well, one step toward fulfilling a pledge to more than triple how much crude it stops from spewing into the Gulf of Mexico.

Federal authorities gave permission late Monday for BP PLC to use a new method that involves pumping oil from the busted wellhead to a special ship on the surface, where it would be burned off rather than collected.

The British oil giant announced Monday it hopes to trap as much as roughly 2.2 million gallons of oil daily by the end of June as it deploys additional containment equipment, including the flaring system.

To trap more oil faster, BP would continue to siphon off the flow from a containment cap sitting above the well to a drill ship sitting on the ocean surface. More oil from the blowout preventer - a stack of pipes sitting on the seafloor - also would be drawn through hoses and pipes to a drilling rig where it will be burned using a specialized flare.

Still, BP warned its containment efforts could be hampered if hoses or pipes clog and as engineers struggle to run the complicated collection system.

• Also, BP spokesman Bill Salvin told The Associated Press that the company has contracted with actor Kevin Costner and Ocean Therapy Solutions to use 32 of their centrifuge machines that are designed to separate oil from water.

"We recognized they had potential and put them through testing, and that testing was done in shallow water and in very deep water and we were very pleased by the results," Salvin said.