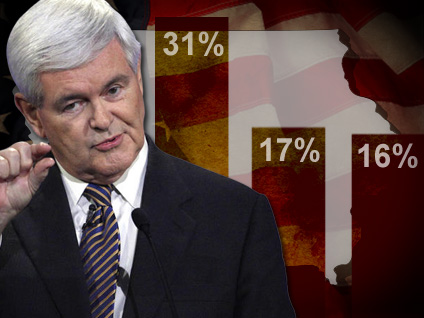 Newt Gingrich has taken a double-digit lead over Mitt Romney among Republican caucus-goers in Iowa, according to a new poll from CBS News/New York Times.

The poll, conducted from November 30 to December 5, shows Gingrich leading Romney by 14 percent, with 31 percent support to Romney's 17 percent.

Ron Paul chases Romney with 16 percent support, and Rick Perry follows him with 11 percent. Michele Bachmann and Rick Santorum trail with nine percent and four percent, respectively, while Jon Huntsman clocks in at just one percent.

Newt Gingrich strong with Iowa evangelicals, Tea Partiers
In Iowa, it's not all good for Gingrich
Why Gingrich is surging in Iowa

While most of the interviewing for this poll was conducted before Herman Cain suspended his candidacy on Saturday, caucus-goers were asked their candidate preference in questions including and excluding the former Godfather's Pizza CEO.

Cain's withdrawal from the race did not appear to significantly impact the remaining candidates' standings - he had already slipped to 7 percent support by the time of this survey - but Gingrich was able to slightly open up his lead over Romney as a result: When Cain was included among the candidates in the poll, Gingrich earned 28 percent to Romney's 18 percent.

Michele Bachmann saw the biggest relative boon as a result of Cain's departure: She jumped from four percent to nine percent in light of Cain's exit. Ron Paul saw a slightly more modest two percent gain, taking him from 14 percent to 16 percent.

Santorum, Huntsman, Perry and Romney all saw their numbers relatively unaffected by the candidate's withdrawal.

When it comes to electability, Republican Iowa caucus-goers gave Gingrich a slight edge over the former Massachusetts governor.

All other candidates polled in the single-digits on the electability question: Texas Gov. Rick Perry with 9 percent, Rep. Ron Paul with 6 percent, Rep. Michele Bachmann with 3 percent, and both Jon Huntsman and Rick Santorum with 1 percent.

With less than a month to go until the Iowa caucuses, however, there is still room for movement in the race; 34 percent of respondents say they are set on a certain candidate, but 66 percent say they could still change their minds.

Though Iowa's Republican caucuses have often hinged on issues important to social conservatives, this year in Iowa -- as in the nation -- it's the economy that voters call their top concern. Caucus-goers say in the CBS News/New York Times poll they're seeking someone who can turn the nation's economy around and who has new ideas to do so. Seventy-one percent of respondents ranked the economy above social issues in determining their vote, compared with 14 percent who said the opposite. Thirteen percent said they would weigh both equally.

Respondents are nearly split on which candidate they think would serve them best on economic issues: 22 percent of Republican caucus-goers opted for Romney, while 21 percent chose Gingrich. Ron Paul followed with 15 percent, and Rick Perry trailed with 13.

Gingrich, however, has a significant edge over Romney on issues such as health care, illegal immigration, and reducing America's budget deficit. Twenty-five percent of respondents said they think Gingrich would do the best job on deficit reduction, compared to 17 percent who said the same of Romney. On health care, Gingrich has a nine-point lead, besting Romney by 24 percent to 15 percent. On dealing with illegal immigration, 21 percent put their faith in Gingrich, while 13 percent opted for Romney. On tax reform the gap was smaller, but voters still favored Gingrich by 17 percent to 12 percent.

And in one area, Romney runs a significant deficit compared to his competitors. Just 40 percent of Iowa caucus-goers think the candidate -- who has taken a lot of flak over the years for "flip-flopping" on key issues -- says what he believes most of the time. More than half -- 53 percent -- think he says what people want to hear.

Gingrich also holds a strong lead when it comes to issues reflecting leadership and presidential readiness. He is seen as by far the most prepared candidate to serve as president, coming in more than 20 points ahead of Romney on the question, by 43 percent to 20 percent. He is also viewed as the candidate most qualified to be commander-in-chief, where he outpolled Romney 40 percent to 19 percent. On the matter of who would be best equipped to contend with an international crisis, Gingrich scored 44 percent; Romney earned only 16 percent support.

The two putative frontrunners are much more closely matched on questions of electability: 31 percent of respondents said Gingrich has the best chance to beat President Obama in 2012, and 29 percent said the same of Romney. Paul earned six percent on that question, and Perry nine percent.

Moreover, caucus-goers indicated they are not necessarily backing the candidates they think most shares their values in the 2012 primary: Bachmann scores highest in that department with 19 percent, followed by Paul (18 percent), Romney (16 percent), Gingrich (11 percent), Santorum (10 percent), Perry (10 percent) and Huntsman (one percent).

Respondents are split on the importance of choosing a candidate who can beat Mr. Obama versus one with whom they agree with on the issues. Fifty-one percent say agreement on the issues is most important, while 48 percent opt for the ability to win in 2012.

Four in five caucus-goers want a candidate who will come up with new ideas to solve the country's problems, and two in three want one who is flexible about changing a position when necessary.

Meanwhile, the poll suggests a candidate's personal life does matter to Republican caucus-goers; seven in 10 say that should be factored in along with his or her political record.

Other findings from the poll:

CBS News and The New York Times conducted telephone interviews November 30 - December 5, 2011 with 642 registered voters who said they would definitely or probably attend the Republican caucus in Iowa. The error due to sampling could be plus or minus four points for caucus-goers.

The sample was drawn from two sources: the state of Iowa's registered voter list, and an RDD sample of cell phone interviews.

Results were weighted by probabilities of selection and by demographic characteristics to reflect the eligible caucus-goers on the Iowa voter list.