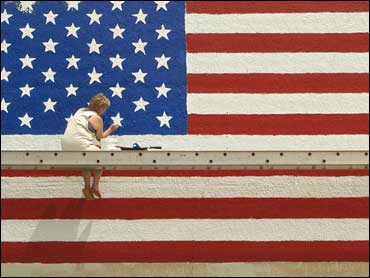 As Americans prepare to celebrate their nation's birthday this Fourth of July, it may be a bittersweet occasion. A CBS News poll finds that many think the Founding Fathers would be disappointed in the nation today, and belief in a better future for the next generation of Americans is down somewhat from last year.

Yet, most of those polled are satisfied with their own lives – especially those who have higher incomes. Essential parts of the American Dream remain alive and well this Independence Day: most think opportunities for success are better than their parents' were, and Americans overwhelmingly say it is still possible to go from rags to riches with hard work.

Many Americans – 48 percent - express pessimism about the future for the next generation: they think life for them will be worse than life is today.

THE FUTURE FOR THE NEXT GENERATION WILL BE...

This downbeat sentiment has spread since last year, up ten points, and is very different from 2000, when CBS News polls found many more were optimistic. Pessimism was higher, though, in 1995.

But, the poll finds most Americans believe that the possibilities for success remain in their own hands.

STILL POSSIBLE TO START POOR, WORK HARD, AND GET RICH?

Americans are satisfied with how things are going in their lives – but not completely. Overall, about half call themselves somewhat satisfied and 27 percent are completely so.

But, when the answers are broken down by income level, the poll finds a correlation between income and happiness.

THOSE MAKING MORE THAN $50,000:
SATISFIED WITH HOW THINGS ARE GOING IN YOUR LIFE?

Most Americans still believe they have a better chance at success than their parents' generation did, the poll finds. Yet pessimism on this is higher than at the start of this decade: today almost one in five thinks their opportunities are worse – something very few people thought in 2000.

The poll finds American's opinion of the country as a whole even more pessimistic.

IF THE FOUNDERS CAME BACK THEY WOULD BE...

Many of those polled said the nation is on the wrong track – more so today than ever before. Only 19 percent of Americans believe the country is generally going in the right direction – the lowest number recorded in a CBS News Poll since the question was first asked in 1983.