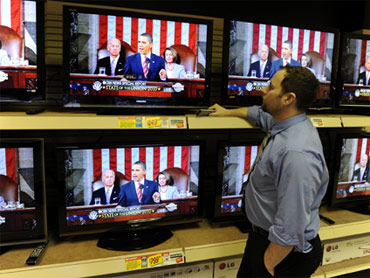 A large majority of Americans who watched President Obama's State of the Union Address generally approve of the proposals he outlined in his speech, according to a CBS News Poll conducted online by Knowledge Networks immediately after the President's address.

Of the randomly selected 522 speech viewers questioned by CBS, 83 percent said they approved of the proposals the President made. Just 17 percent disapproved — typical of the high support a president generally receives among those who choose to watch the State of the Union. In January 2002 — when George W. Bush gave the State of the Union Address a year into his presidency — 85% of speech watchers approved.

Six in 10 of those asked said they thought Mr. Obama conveyed a clear plan for creating jobs, and seven in 10 said his plans for the economy will help ordinary Americans. Another seven in 10 said President Obama has the same priorities for the country as they have.

The same individuals were interviewed both before and after Wednesday's State of the Union, and after the speech, 70 percent said Mr. Obama shares their priorities for the country, up from 57 percent before the speech.

Most Democrats and independents who watched said the president shares their priorities, while most Republicans did not.

In his speech President Obama said jobs would be "the number one focus in 2010," and here the president seems to have changed the minds of many speech watchers. After listening to the president, 59 percent of viewers said Mr. Obama has a clear plan for creating jobs, while 41 percent said he does not. Before the speech those numbers were almost exactly reversed.

Seventy-six percent of speech watchers generally approved of Mr. Obama's plans for dealing with the economy, up 21 percentage points from before the speech. President Obama laid out a plan for freezing spending for discretionary government programs for three years starting in 2011, and this seems to have resonated — 72 percent of those questioned approved of the plan.

Viewers were also more optimistic about the impact of President Obama's economic plans after watching the speech. Seventy-one percent said his economic plans will help ordinary Americans – up from 55 percent before the speech — and 56 percent were left thinking his plans will reduce the budget deficit in the long run, up from 41 percent.

On health care, President Obama reiterated the need for reform, and most speech watchers (67 percent) approved of the president's plan for dealing with the issue. Prior to his speech, 54 percent said they supported his plans.

The Commander in Chief also garnered approval for his handling to the war in Afghanistan with his speech Wednesday, with those supporting his strategy increasing from 58 percent before the address to 74 percent afterward.

Perhaps predictably, Americans who watched the speech were more Democratic than the nation as a whole. Historically, a President's supporters are more likely than his opponents to watch State of the Union addresses. Forty-four percent of speech viewers in this poll described themselves as Democrats while only 21 percent said they were Republican.

More Coverage of Obama's State of the Union:

This CBS News Poll was conducted online by Knowledge Networks among a nationwide random sample of 522 viewers of the President's Address to Congress. Knowledge Networks, a Silicon Valley company, conducted the poll among a sample of adult members of its household panel who said in recent days that they intended to watch the speech. The Knowledge Networks panel is a nationally representative sample given access to the Internet. This is a scientifically representative poll of viewers' reaction to the speech. The margin of sampling error could be plus or minus 4 percentage points for the entire sample of speech watchers.