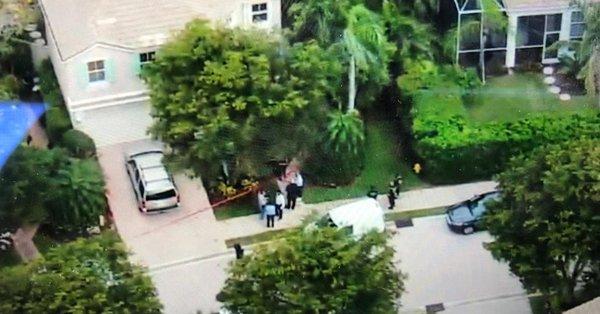 PALM BEACH GARDENS, Fla. -- Police say a South Florida teen accused of going on a fatal stabbing rampage at a sleepover admitted to the attack and said it was over his religious beliefs.

The 17-year-old suspect said he had recently converted to Islam and admitted watching extremist videos online about jihadists that encourage death to non-believers before the attack in which a 13-year-old boy died, a probable cause affidavit says. The FBI, the Jupiter Police Department and school district police had investigated the teen suspect last year because of concerns about the violent videos and his alleged "violent tendencies," Palm Beach Gardens interim police chief Clint Shannon said at a Monday press conference.

The Jupiter resident was a student at Dwyer High School and was recently withdrawn, Shannon said. Palm Beach Police were flagged to him in March of 2017, Shannon said.

Police say the incident happened early Monday while the suspect, who is charged as a juvenile, was spending the night at the Palm Beach Gardens home of a 15-year-old friend and the friend's younger brother, 13. Also in the home were the boys' mother Elaine Simon and another 13-year-old boy who was also attending the sleepover.

Police say the teen suspect waited until everyone was asleep and then fatally stabbed the 13-year-old guest, Jovanni Brand, Palm Beach Gardens police say in the probable cause affidavit. Simon heard what she thought was Brand moaning and went to the top of the stairs, where the suspect allegedly attacked her with a knife and stabbed her about 12 times.

Simon's 13-year-old son ran to protect his mother and the boy was stabbed about 30 times, the affidavit says.

The boy and his mother ran to a neighbor's house where the neighbor called 911, saying a woman who rang his bell was "bleeding like crazy."

"She says there's a killer out there, I don't know what she's talking about," the unidentified caller says in a recording of the call obtained by CBS affiliate WPEC.

The dispatcher asked to talk to the woman, but the caller said she was "hysterical."

"No, she's dying over here! The kids are out here bleeding! There's a murderer here, you gotta get somebody here," the caller says.

Police arrived and found Simon's 15-year-old son in the home uninjured and the teen suspect barricaded in a room. The suspect eventually surrendered to a SWAT team.

The suspect told police he felt Simon's 13-year-old son "made fun of" his religious beliefs and the way the suspect prayed. He allegedly admitted to watching violent extremist videos on a cellphone with  Simon's 15-year-old son the day before the stabbing rampage.

He said Jovanni Brand, the victim who died, was "idealizing famous people and referencing them as Gods." He told police he read the Quran prior to the attack to "give him courage to carry out his intentions."

Brand died of a throat laceration and multiple stab wounds, reports WPEC. The attack reportedly fell on the boy's birthday.

Simon and her 13-year-old son remain hospitalized. She told police she had known the suspect for about 10 years.

The suspect was in juvenile court Tuesday afternoon surrounded by a heavy law enforcement presence, according to WPEC reporter Michael Buczyner. The judge ordered him held on one count of murder and two counts of attempted murder.

The local Islamic community has condemned expressions of their faith that involve any form of violence. Wilfredo Ruiz, communications director for the Council on American-Islamic Relations in Florida, told the Palm Beach Post that officials of the mosque told him they do not recall seeing the boy or knowing of him.