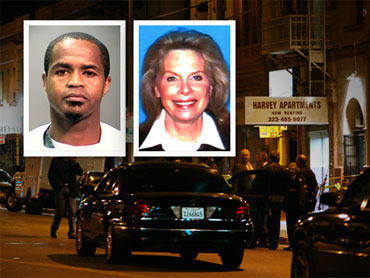 Beverly Hills police now say they believe the murder of Hollywood publicist Ronni Chasen three weeks ago was a robbery gone bad, carried out by a career criminal who committed suicide last week as police closed in on him.

On "The Early Show" Thursday CBS News National Correspondent Ben Tracy reported it was in Harvey Apartments in Los Angeles where police showed up at last week to question Harold Martin Smith. He shot himself and police now say that same gun was used to kill Ronnie Chasen.

For three weeks, the investigation into the murder of Ronni Chasen has played out like a Hollywood movie, complete with conspiracy theories. Now police may finally have solved the crime. They say preliminary ballistic reports show that the gun used to kill Chasen was the same one their so-called "person of interest" -- Smith-- used to take his own life when approached by police.

Police say Smith may have been riding a bicycle when he allegedly shot Chasen several times in the chest at a Beverly Hills intersection in a botched robbery. The publicist was gunned down November 16 in her Mercedes while driving home from a movie premiere.

Smith had a long criminal record. He was arrested seven times, including felony robbery. Last week, a tip from the TV show "America's Most Wanted" led police to Harvey Apartments, but Smith pulled out a gun and committed suicide. Though he previously bragged to neighbors he was paid $10,000 to shoot Chasen, police say that's not the case.

Sgt. Michael Publicker, of the Beverly Hills Police Department, said in a press conference, "It appears that he did act alone. Whether Mr. Smith knew Mrs. Chasen, it does not appear, at this time, there's any connection between the two."

Some of Chasen's friends are skeptical of what police are now saying.
Roger Friedman, a friend of Chasen's, told CBS News, "I think there's still a lot of unanswered questions. Maybe the police are right. Or maybe they're partially right, but I think they are hurrying to make some kind of announcement because there's so much pressure on them."

Despite linking Smith to the crime, police are not calling this case closed, Tracy said. In fact, he said police are still doing tests on his bicycle and interviewing other people in an effort to rule out any other potential killers.

Robin Sax, a former prosecutor, said on "The Early Show" there are still a lot more questions than answers in this case.

"What we heard from law enforcement (is) that they have unequivocally determined this was a one-man job and that the one man was Harold Smith," she said. "But, amongst the people here, that doesn't feel very settling. And doesn't really necessarily match up to the evidence that we've been hearing albeit what the detectives have called erroneous."

"Right now, everybody -- or the presumption was there were three shots to Ronni Chasen's chest and a couple shots to her shoulders. That led a lot of investigators, a lot of analysts to determine that was a professional hit. Unless we hear that that part of the earlier reports was erroneous, it still sounds a little bit strange that someone from a bicycle is able to shoot someone three times across the chest. Of course, Chief Snowden said that there have been erroneous reports but he didn't go so far to say what was erroneous. Also, where were the casings? Did harold smith pick up the casings? He never took anything from her vehicle. He was riding a bicycle all the way from Hollywood to Beverly Hills, which is a good seven miles away from the scene of the crime from where his house is, not an area highly trafficked by bicycles. So still all these unanswered questions leading people to think you said there was a 60 to 70 percent finish of the investigation, but yet, there's still all of these other parts that are unknown."

"Early Show" co-anchor Erica Hill noted Chasen's friend's comment that police may be under pressure to make an announcement.
Hill said, "Did that come into play?"

Sax replied, "It's too bad. I feel Beverly Hills P.D. did such a great job remaining tight-lipped for the whole duration of the investigation and come out and essentially close it and self-admitting 60 to 70 percent is a very dangerous position, I think for Beverly Hills Police Department, because if it turns out there was something else there, all you have of to do as a defense attorney is roll that press conference where they have said that they have determined the cause of the crime. So, it's really unfortunate that if there was a pressure that they actually went so far as so say more than just there was a gun match, which is what I believe the original intention of the press conference yesterday was."

So will we ever know what definitively happened?