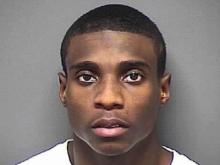 DURHAM,  N.C. — Police are conducting a citywide search for a man who was suspected of firing three to four shots on the campus of North Carolina Central University in Durham on Thursday afternoon. Officials have identified the suspected shooter as 20-year-old Crandall Ingram,  a former NC Central student, according to CBS affiliate WRAL.

The station reports that, according to NCCU Police Chief Timothy Bellamy, Ingram was banned from the university two years ago and was already wanted by campus police on charges of trespassing and delaying and obstructing a law enforcement officer. after an officer saw him on campus last week.

The chief, however, would not say why Bellamy was banned but said extra precautions were being taken on campus Thursday night.

"There is always going to be some issue of concern until we apprehend Mr. Ingram, but I would like to say that we will put officers on high visibility tonight, along with the city police department, so I feel students will be very safe tonight," Bellamy said.

Officers did take in for questioning an unidentified man whom Ingram is accused of trying to shoot.

"He is not hurt. He is not injured. There is nothing wrong," Bellamy said. "He's going down to be questioned, to give statements concerning what happened this afternoon."

The manhunt for Ingram comes after the report of an "active shooter" at the school Thursday caused a brief  campus lockdown.