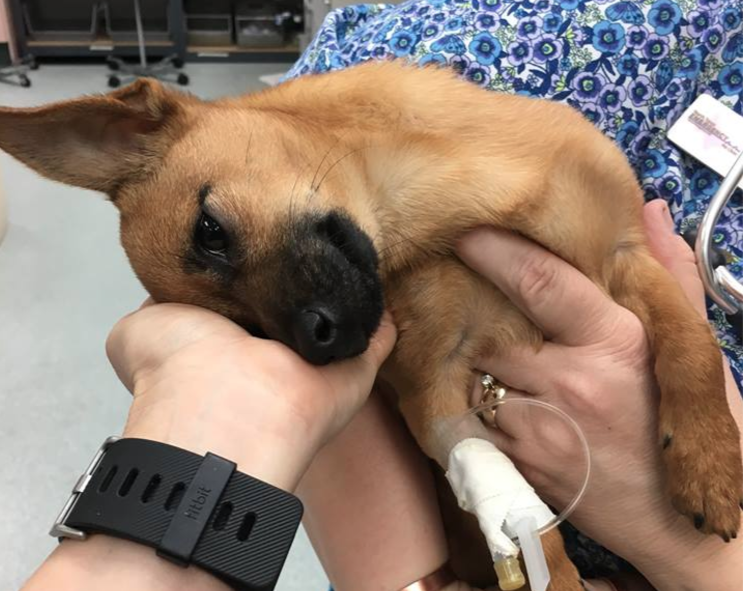 While responding to a theft call outside a Home Depot in Carrollton, Texas, police officers stumbled upon a whimpering puppy in the floorboard of a pickup truck in the parking lot.

At first, the officers didn’t know what was wrong with the tiny tan and black puppy, but upon closer examination of the vehicle, they were almost certain it was a drug overdose.

“We weren’t sure exactly what was going on with it, but there was drug paraphernalia,” Carrollton Police spokeswoman Jolene DeVito told CBS radio station 1080 KRLD. “Eventually we did find drugs in the car and made sure the puppy got medical attention right away. Sure enough, he was basically suffering from a heroin overdose.”

Officers rushed the weeks-old pup, who they described as being “near death” after ingesting the drugs, to the North Texas Emergency Pet Clinic on Saturday.

After days of treatment and monitoring, the police were happy to announce on Facebook Tuesday afternoon that the “honorary K-9” is on his way to a full recovery from the opiate overdose.

The dog will be placed in the care of the City of Carrollton Animal Services once he is healthy, and hopefully, in the very near future, will be placed for adoption.

“It was my pleasure to care for this sweet baby,” said Fowler, responding the police department’s post on Tuesday.

The dog’s owners, Thomas Romero, 46, and Nina Crawford, 38, were arrested for heroin possession and for fraudulent destruction, removal, or concealment of writing. DeVito told 1080 KRLD animal abuse charges will likely be added.