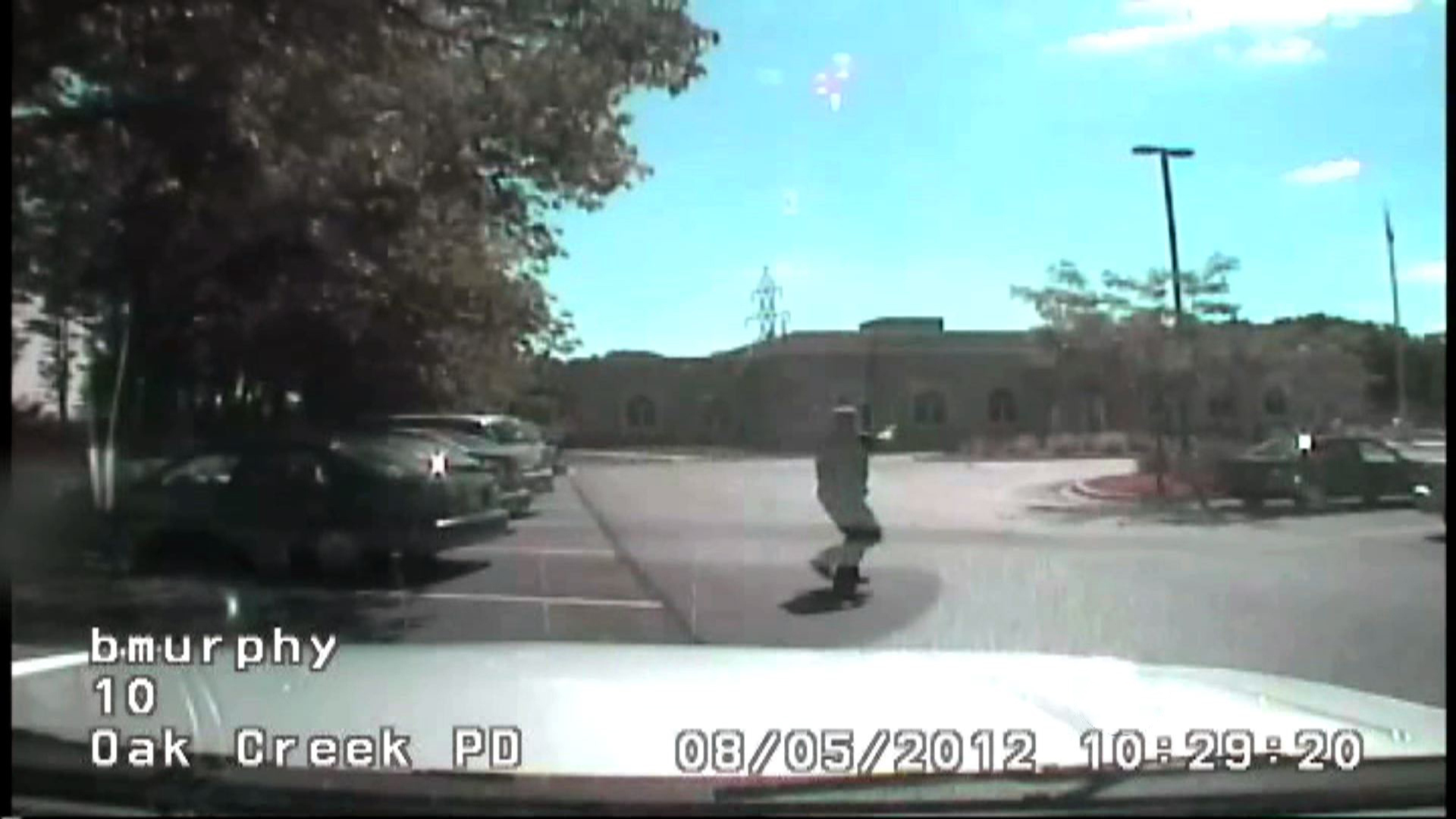 (AP) OAK CREEK, Wisconsin - A white supremacist who killed a half-dozen people at a Sikh temple in the U.S. last month chased down the first police officer on the scene, pumping round after round into him as he lay wounded behind a parked car, video released Monday showed.

Murphy was shot while tending to two victims of Wade Michael Page's Aug. 5 rampage at the Sikh Temple of Wisconsin. Page, a 40-year-old Army veteran, opened fire with a 9 mm pistol shortly before Sunday services were to begin. He killed six worshippers and wounded four others, including Murphy, before killing himself.

Page's motive in the shooting spree remains unclear. The FBI is investigating, but U.S. Attorney James Santelle said it could be weeks or months before the agency releases any conclusions.

The squad car video shows a second officer arriving seconds after Page chased down Murphy. Officer Sam Lenda and Page exchange fire, and then Page, barely discernible in the distance, takes a round in the stomach and topples over. A final shot rings out as Page shoots himself in the head.

"Our police officers handled themselves in a professional and heroic manner," Oak Creek Mayor Steve Scaffidi said at the news conference where the footage was released. "Their actions probably saved lives."

Police released about one minute of footage from Murphy's squad car and about three minutes from Lenda's in response to an open records request from The Associated Press and others.

Murphy's dashboard-mounted camera shows him speeding to the temple and pulling into the sun-splashed parking lot. He stops in front of two victims, whose bodies were obscured before the video was released. Murphy can be seen on the edge of the screen with his .45-caliber pistol drawn, speaking into his radio.

The video then shows Page, dressed in a white shirt and black pants, bursting out of the temple. Murphy spots him and raises his gun. Page runs out of the frame and Murphy rolls for cover behind a parked car, disappearing from view. Page then jogs back into the frame and walks quickly toward Murphy, shooting out the back windshield of a nearby car before moving off-screen again.

Milwaukee County District Attorney John Chisholm said Murphy was hit in the cheek as he rolled for cover and the bullet entered his throat. He tried to raise his gun again, but Page shot him in the thumb, knocking the weapon away. Then Page closed in on Murphy, firing from about 10 feet away, Chisholm said. Murphy told investigators he remembered wondering when Page would run out of ammunition.

"There's a deliberateness about him," Chisholm said of Page. "He intended to kill him."

Murphy did not attend the news conference. He was released from a hospital Aug. 22 and is recovering at home. Edwards said previously that Murphy can speak only in a whisper after being hit in the throat.

The video from Lenda's squad car shows him arriving about 10 seconds after Murphy was shot, bouncing over a median and into the temple's driveway. Page sees Lenda's vehicle and starts walking toward him.

Lenda, a police firearms instructor, throws the car into reverse and then moves forward again before stopping about 60 yards from Page. Lenda said he got out of the squad and hid behind the door with his AR-15 rifle.

Lenda can be heard in the video yelling several times at Page to drop his gun. Page fires and a portion of Lenda's windshield over the steering wheel explodes. Lenda fires six times at Page, who starts walking to his left and then abruptly falls over. A final shot can be heard at the end of the video as Lenda shouts at other officers, asking if they can see Page and if he's crawling.

"He had to be stopped and that's why I decided to shoot," Lenda said Monday. "I'm just an officer who did my job."