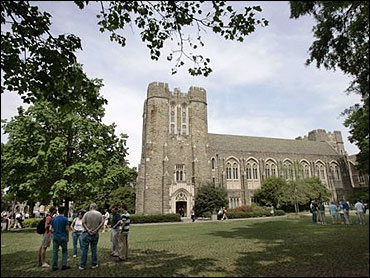 As students at Duke University try to concentrate more on exams and less on the Duke lacrosse rape investigation, university police searched a dorm room after a woman said a fellow student raped her following an end-of-classes party last week.

Authorities said the investigation wasn't related to an exotic dancer's allegations that she was raped and beaten by three men at an off-campus party thrown by Duke's lacrosse team in March.

No charges have been filed, but authorities collected DNA samples from the woman and the man she says attacked her.

The accuser said the man walked her to her room after the April 26 party and had sex without her consent, police said. The man told police he walked the woman to her room and helped her get into bed, but denied raping her.

The man's lawyer, Steve Sitkoff of Los Angeles, said there was "zero truth to the allegations."

"I am confident that once the Duke police, who I have utmost confidence in, have completed their investigation, they will come to the exact same
conclusion I have come to, which is that my client is 100 percent innocent of these allegations," Sitkoff said.

Both drugs and alcohol are believed to have been involved, Lewis reports. Investigators said the woman had consumed a large amount of alcohol at the party and that someone had rigged a vaporizer to spew marijuana smoke into the room.

On a police department website, investigators write the woman could not provide too many details of what happened leading up to the alleged attack, Lewis notes.

Earlier this week, faculty reports called for action to combat alcohol abuse at the university. Studies conducted amid the lacrosse scandal found that Duke's ambivalence toward drinking made it difficult to deal with the issue.