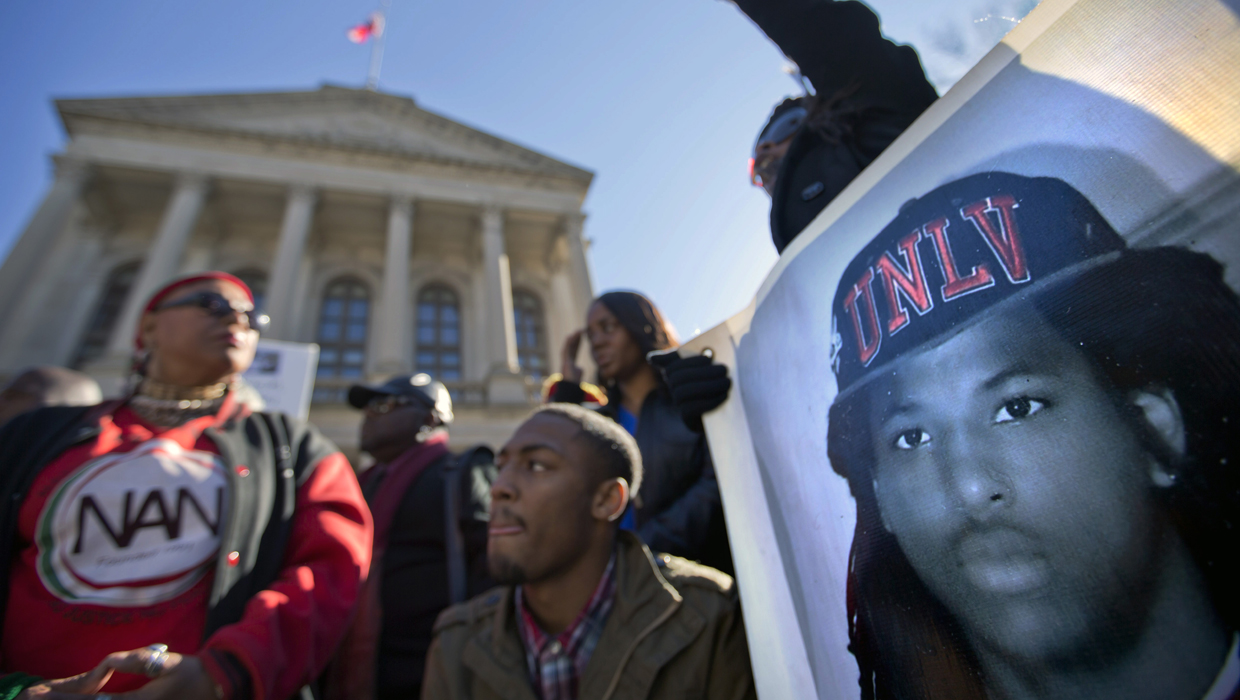 VALDOSTA, Ga. - A Georgia sheriff's department has issued a report detailing its investigation of claims that the Lowndes High School wrestling team was still on campus when Kendrick Johnson, the teen found dead in January 2013 inside a rolled-up gym mat in the school's gym, was last seen alive.

Last month, Johnson's parents and their legal team released a video that focused on two brothers - one of whom was on the wrestling team - who the family contends were on campus when Johnson was last seen alive, and who they say may have had a motive to harm their son.

The video aimed to challenge the Lowndes County sheriff's assertion that 25 students on the Lowndes High School wrestling team, including one of the brothers, were already on a bus heading to Macon on January 10, 2013 at 1:09 p.m., the time Johnson was last seen on school surveillance video entering the gymnasium. His body was found there inside a rolled-up gym mat the next day.

The other brother, who was not on the wrestling team, was at another part of the school when Johnson entered the gym, Lowndes County Sheriff Lt. Stryde Jones told the Valdosta Daily Times earlier this year.

Johnson's family and their attorneys argued a school bus travel log indicates the bus that drove the wrestling team to Macon didn't depart that day until 4 p.m., several hours after Johnson was last seen alive.

In response to this claim, the Lowndes County Sheriff's Department says it conducted its own investigation into the bus and wrestling team's travel timeline on that day. As part of that inquiry, the sheriff's department says it interviewed William White, the bus driver who drove the wrestling team to a tournament in Macon on January 10, 2013.

48 Hours' Crimesider spoke with White on November 18, 2014 and asked him whether he recalled what time the bus departed Lowndes High School for the tournament on the day Kendrick Johnson was last seen alive.

"I drive for a living and I've done so many trips. I couldn't even begin to remember," White said.

But Lowndes County authorities say in their newly released file that they also spoke with White on November 18 and that after they refreshed his memory by telling him that the weigh-in for the tournament was between 4 and 6 p.m., White told them the bus left around 12:30 p.m., and also said he believes they stopped in Perry, Ga., for a restroom break.

When asked by authorities if he recalled the athletes who were on that very trip, specifically the wrestler Johnson's parents singled out in their video, police say White confirmed that wrestler was on the bus, and said he knew this because that boy was "one of the better wrestlers on the team," with the driver adding that he is "very interactive with the wrestlers as he enjoys the sport."

As part of their recent investigation, police say they also interviewed the school's wrestling coach, Spencer Graybeal, who said the tournament-bound athletes were excused from classes on January 10, 2013 starting at 11:32 a.m. and were instructed to eat lunch if they wanted to do so. According to the report, Graybeal went on to say that while he wasn't sure of the exact time the team departed the school that day, he said it was sometime between 11:50 a.m. and 12:30 p.m. The team was scheduled to weigh-in for the tournament in Macon at 4 p.m. Macon is approximately 150 miles north of Lowndes High School.

Graybeal told police the brother singled out in the Johnson family's video was on the bus and participated in the tournament, according to the report. Graybeal provided a copy of a weigh-in report indicating the specific wrestler in question weighed in at the tournament, but does not show what time that took place.

Furthermore, police say Graybeal gave them his cell phone records which appear to show that the coach received a phone call while in Cordele, Ga. at 1:53 p.m. on January 10, 2013. Cordele is approximately 85 miles north of the school, indicating that the bus would have already been on the road, and more than an hour into the drive to Macon.

According to the sheriff's department report, Graybeal explained that the trip log referenced in the Johnson family video which says the team didn't depart the school until 4 p.m. that day is a form he submitted at the beginning of the school year with dates and estimated times for when the team needed to reserve a school bus. The request is later updated when specific times are learned, he said, but that communication is not recorded and the form is not updated.

As part of their investigation, authorities say they also spoke with several former students who were on the wrestling team at the time of Johnson's death. While some were not able to recall what time the bus left on that January day nearly two years ago, police say some apparently were, and those who did all indicated the bus left early in the day - prior to the time Johnson was last seen alive. Police say several students told them that Coach Graybeal required all students who were competing in the tournament to take the bus and some recalled the brother implicated by the Johnson family being on the bus that day.

Police say one of the wrestlers went as far as saying he remembers where the brother in question was sitting on the bus that day and said he was talking and "playing" with friends.

The Lowndes County Sheriff's Office closed its initial investigation into Kendrick Johnson's death on May 2, 2013, nearly four months after the 17-year-old was found in the school gym in Valdosta. Authorities ruled his death a freak accident, saying he fell head-first into an upright mat while trying to retrieve a shoe, and became trapped. An autopsy conducted by the Georgia Bureau of Investigation concurred, citing asphyxiation as the cause of death.

Johnson's family insisted there was more to the story and had their son's body exhumed for a second autopsy. It was then that a private pathologist concluded the teen died of blunt force trauma to the neck and said his organs were missing and the teen's body had been stuffed with newspaper.

In Oct. 2013, U.S. Attorney Michael Moore ordered a federal review of Johnson's death. A grand jury was hearing evidence. The findings of that investigation have not been released.

According to the sheriff's department report on a page dated November 19, 2014, the Department of Justice took possession of the gym mat in which Kendrick Johnson was found dead. They also received copies of three compact discs with the audio of 911 calls related to the case and two compact discs containing school surveillance footage.

On Thursday, December 18, Johnson's parents and their legal team held a news conference calling for the passage of "Kendrick's Law," new legislation which would require all coroners in the United States to be medically licensed professionals. They also released a documentary entitled, "Unfortunate: What Really Happened to Kendrick Johnson."