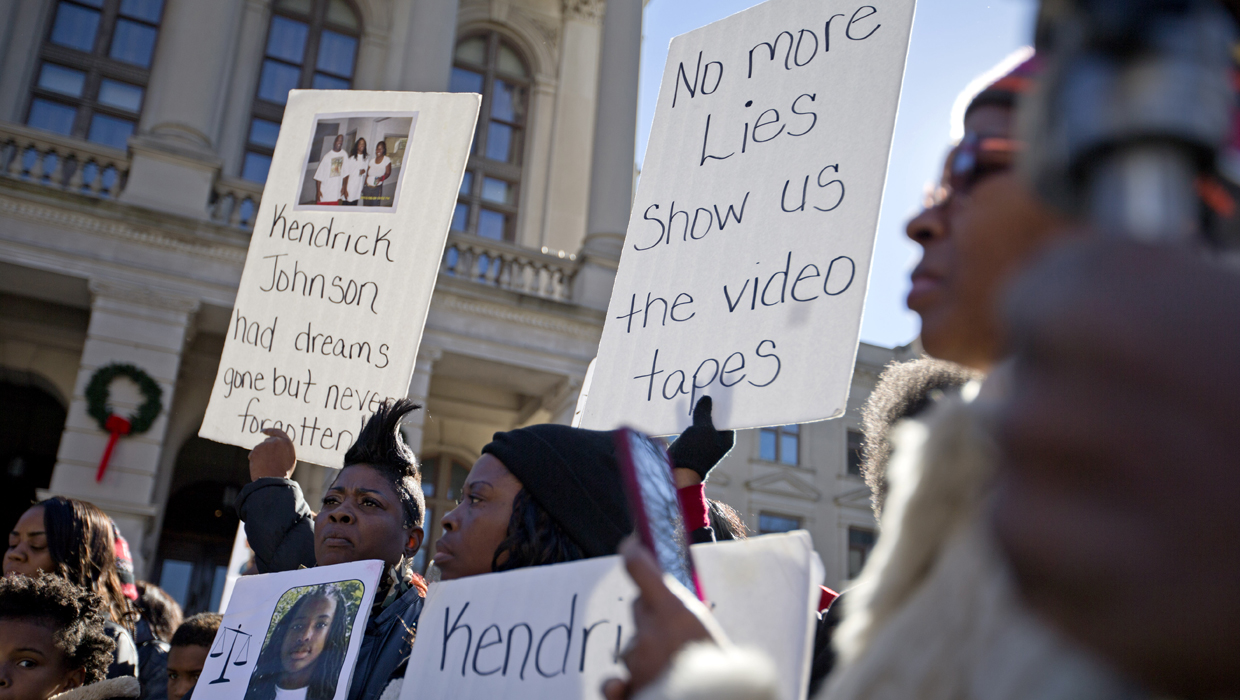 The parents of Kendrick Johnson, the Georgia teen found dead inside a rolled-up gym mat in his Valdosta high school in January 2013, have released a video that focuses on two brothers who the family contends were on campus when Johnson was last seen alive, and who they say may have had a motive to harm their son.

At a news conference Tuesday, Kenneth and Jacquelyn Johnson and their attorney, Chevene King, disclosed what they called new information to challenge the police assertion that 25 students on the Lowndes High School wrestling team, including one of the brothers, were not at school at the time the 17-year-old went missing.

King referred reporters to this 2 ½-minute video his investigative team produced to advance their case, urging parents of the wrestling team members to "talk to your children" and "find out what they know," as they focused attention on the brothers who were schoolmates of Johnson.

"While more than 100 students cooperated with investigators, only two, according to the [police] case file, refused to talk to police. The two were former Lowndes High School wrestler... and his younger brother, a classmate of K.J.'s [Kendrick Johnson's]," the video narrator says.

According to the 500-plus page police case file obtained by 48 Hours' Crimesider, authorities attempted to question both brothers in the aftermath of Johnson's death after hearing that the younger brother had been in a confrontation with Johnson on a school bus in 2011.

The boys' father, who works for the FBI according to Johnson's team, referred authorities to the family attorney, who in turn, said the boys would not be speaking with investigators, the case file says.

Lowndes County Sheriff Lt. Stryde Jones told the Valdosta Daily Times earlier this year that the brothers were never considered suspects and that foul play was not suspected in the 17-year-old Johnson's death. He said authorities only wanted to speak to the brothers because of rumors.

"We spent a lot of time chasing rumors and conducting interviews based on what we had heard," Jones told the paper, also saying, "But class records show that the oldest brother was out of town, and the younger brother was at another part of the school when Kendrick entered the gym."

The older brother did attend a wrestling tournament in Macon that day, but Johnson's parents and their attorney are calling into question when he departed the school for that tournament. They say a school bus travel log and school attendance records cast doubt on whether the older brother was already on a school bus going to the tournament when Johnson was last seen.

They say school attendance records show the tournament-bound athletes were excused from classes starting at 11:32 a.m. on January 10, 2013 and that a school bus travel log indicates the bus that drove the team to Macon didn't depart that day until 4 p.m., nearly-four-and-a-half hours later.

According to Johnson family attorney Chevene King, Kendrick Johnson was last seen on school surveillance video at 1:09 p.m. that day entering the gymnasium. His body was found there inside a rolled-up gym mat the next day.

Warren Turner, attorney for Lowndes County Schools, told 48 Hours' Crimesider on Wednesday that the school bus travel log Johnson's legal team is referring to is a "trip request" that was filled out weeks before the tournament to reserve the bus. He says it does not indicate when the bus actually departed the school.

According to Turner, on the day of the wrestling event, the wrestling team had the school's first lunch session which lasted from 11:32 a.m. to 12:02 p.m., and then the team and coaches boarded a bus and left for Macon, which is approximately 150 miles north of Lowndes High School.

Turner says the wrestling coach's cell phone records indicate the team was in Cordele, Ga., at 1:53 p.m. Cordele is approximately 85 miles north of the school, indicating that the bus would have already been on the road, and more than an hour into the drive to Macon.

The Valdosta Daily Times obtained the cell phone records of the wrestling coach and a weigh-in report for one wrestler singled out in the Johnson family's video, and shared them with Crimesider. The phone records appear to show that the coach did receive a phone call while in Cordele, Ga. at 1:53 p.m. on January 10, 2013. The weigh-in report indicates the wrestler was weighed in at the tournament, but does not show what time that took place.

Turner, the attorney for the school board, told Crimesider the Lowndes High School wrestling team was scheduled to weigh-in for the event at 4 p.m.

Paul Threlkeld, an attorney representing the brothers, sent a statement to Crimesider Tuesday labeling as "incorrect" the Johnson family's claim that the bus did not leave Lowndes High School until 4 p.m. on Jan. 10, 2013.

"We understand that the departure time was sometime between 12:15 and 12:30 PM, an hour before KJ entered the LCHS [Lowndes High School] old gym. This was after the students had the opportunity to eat early lunch," Threlkeld said.

Johnson family attorney Chevene King sent Crimesider three documents, including the school bus travel log referenced above, that he says came from the Lowndes County School Board. King says all three documents indicate the bus to the wrestling tournament did not leave the school until 4 p.m. The documents do list a 4 p.m. departure time, but it is unclear when that information was entered, or whether the bus did in fact leave then.

The video released by the Johnson family attorney contains surveillance images from the school of what he says is Kendrick Johnson in line to get lunch on the day in question with at least one wrestling team member who was going to the tournament.

It also contains surveillance images of someone the attorney and his investigative team say is the older brother the family is focusing on, "criss-crossing the hallway in front of the old gym" on the day Johnson was last seen alive.

The Lowndes County Sheriff's Office closed its investigation into Kendrick Johnson's death on May 2, 2013, nearly four months after the 17-year-old was found dead in the school gym in Valdosta. Authorities ruled his death a freak accident, saying he fell head-first into an upright mat while trying to retrieve a shoe, and became trapped. An autopsy conducted by the Georgia Bureau of Investigation concurred, citing asphyxiation as the cause of death.

Johnson's family insisted there was more to the story and had their son's body exhumed for a second autopsy. It was then that a private pathologist concluded the teen died of blunt force trauma to the neck.