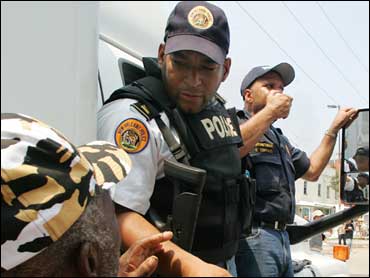 Amid searing criticism and rumors of rampant force desertion, New Orleans Police Superintendent Eddie Compass defended his department Monday with crisp but harsh words, saying officers held their ground without food, water and even ammunition in the aftermath of Hurricane Katrina.

"In the annals of history, no police department in the history of the world was asked to do what we (were) asked," Compass said with a mix of anger and pride.

Sgt. Paul Accardo was one of two city cops who committed suicide last week as New Orleans descended into an abyss of death and destruction caused by Hurricane Katrina. He was found in an unmarked patrol car on Saturday in a downtown parking lot.

He wrote a note telling anyone who found him who to contact — a fellow officer. He was precise, and thoughtful, to the end. Then he stuck a gun into his mouth and killed himself. His funeral was planned for Tuesday.

Back when life was normal and structured, Accardo served as one of the police department's chief spokesmen. He reported murders, hostage situations and rapes in measured words, his bespectacled face benign and familiar on the nightly news.

"Paul was a stellar guy. A perfectionist. Everything had to be just right," recalled Sgt. Joe Narcisse, who went to police academy with Accardo and worked with him in the public affairs office. Two police officers killed themselves.

Defillo said he never thought Accardo would kill himself.

"We kept telling him, 'There's going to be a brighter day; suck it up,'" Defillo said. "He couldn't shake it."

Another officer was shot in the head. Compass said 150 had to be rescued from eight feet of water and others had gotten infections from walking through the murky soup of chemicals and pollutants in flooded areas of the city.

Compass denied that police officers deserted in droves. Some officers had abandoned their jobs, he said, but he did not know how many. He said the department was doing a roll call.'

But when Harry Smith of CBS News' Early Show asked New Orleans Mayor Ray Nagin who bears the shame for what happened there last week, Nagin didn't point fingers at the police: "You know, I think we all do. I think this is America."

The officers still on the beat in the flooded city are being cycled off duty and given five-day vacations in Las Vegas and Atlanta, where they will be offered counseling, officials said.

At a news conference earlier Monday in New Orleans, Deputy Police Superintendent Warren Riley said between 400 and 500 officers on the 1,600-member police force are unaccounted for.

Some lost their homes and some are looking for their families. "Some simply left because they said they could not deal with the catastrophe," Riley said.

Compass, visiting the emergency operations center in Baton Rouge on his first trip outside New Orleans since the storm hit, said New Orleans had police officers "who made the ultimate sacrifice for this city."

"We had no food. We had no water. We ran out of ammunition. We had no vehicles. We were fighting in waist deep water that was infected and polluted," he said.

Compass said the looting and criminal activity involved a small group of people preying on the weak after being thrust into evacuation areas with regular citizens.

As for reports that police stood by while women were raped and people were beaten, the chief responded: "Are you crazy? We did everything that was humanly possible to protect human life."

Without communication or lights, officers sometimes had to follow the traces of light made by fired weapons and physically wrest the guns from individuals' hands, Compass said.

He said he did not know how many people were shot by police since Katrina came ashore.

When asked what he thought of federal and state officials' response to the storm, Compass did not offer criticism.

"I'm not a bureaucrat. I'm a police chief. Those type of questions I don't really answer," he said. "We needed more resources, but those resources didn't come."

Said Mayor Ray Nagin: "I've got some firefighters and police officers that have been pretty much traumatized."

And the leader of troops patrolling New Orleans declared the city largely free of the lawlessness that plagued it in the days following the hurricane. He lashed out at suggestions that search-and-rescue operations were being stymied by random gunfire and lawlessness.

"Go on the streets of New Orleans. It's secure," Army Lt. Gen. Russel Honore said to a reporter. "Have you been to New Orleans? Did anybody accost you?"